Some of the recipes that I enjoy most are those that are more of a “method” or a “formula” than a recipe. Rather than having to very closely follow instructions and a list of ingredients, they are more of a process that can be easily used to create new versions of the original. Today’s recipe for dark chocolate bark is a perfect example of this type of recipe because the process is always the same and very simple:

Yup, that’s a process I think I can handle!

How To Make Your Own Dark Chocolate Bark

I first made a peppermint bark a few years ago and it was a quick, easy, and very tasty way to make a homemade sweet treat for the holidays. I just melted a couple bags of white chips in the microwave, added some peppermint extract and crushed candy canes, spread it out in a pan, and let it harden. Once it’s hardened it’s just a matter of cracking it into pieces.

This year I wanted to try making a dark chocolate version of this bark, and decided it was really the same recipe as the peppermint bark, and that all I had to do was swap in some new ingredients for the original ones like this:

Those simple changes gave me another tasty recipe that had a very different flavor profile than the original, but was basically the same recipe!

There were just a couple small differences as I made my new version. The bags of dark chocolate chips were only 10 ounces (so they are smaller than the 12 oz bags used in the original). I also found that rather than stirring in the additions (like I did with the candy canes), I liked the final result better if I just sprinkled the add-ins over the melted chocolate – AND – I decided to sprinkle on some coarse salt too. But once again, this just shows that’s there room for creativity with this recipe and how it can easily be tweaked.

This is a great recipe for a last minute gift too as it uses the microwave and only takes a few minutes to make. It does have to harden in the refrigerator for an hour or so, but that’s time that you can spend doing other things so it still makes the recipe feel quick.

This is a perfect recipe to try if you’ve ever been intimidated by the idea of making your own sweet treats. Remember, if you can melt stuff, add stuff, and let stuff harden, then you can make your own! 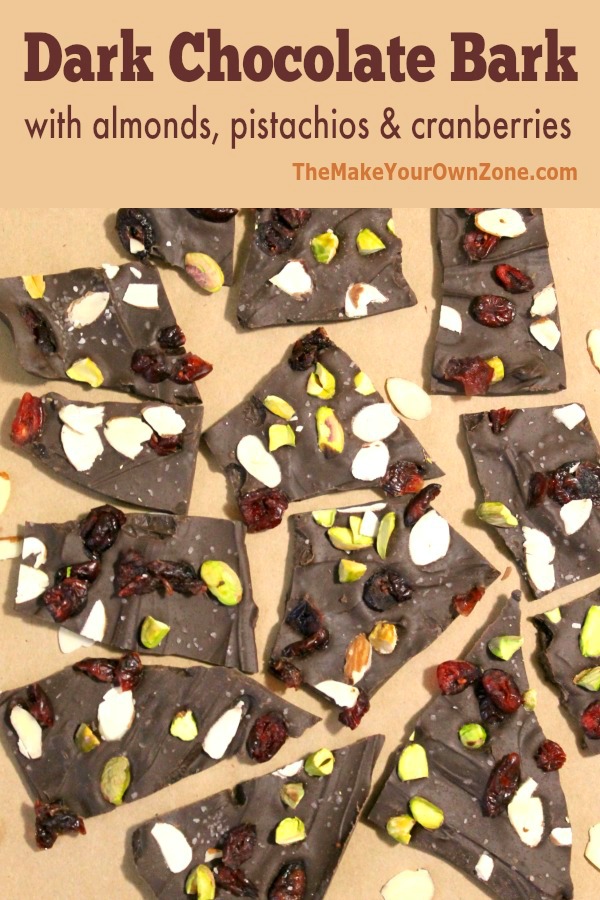 I did not use the full amounts of the cranberries and nuts on my batch, however I listed those amounts because that will certainly give you enough for sprinkling on as much as you wish. You can also try this recipe with different combos of dried fruit and nuts.