One of the clever bathroom cleaning products that I’ve really grown to like over the years are the daily shower cleaner sprays. After you shower you simply mist some of the spray around on the shower walls and it helps to keep your shower clean with less mold or mineral buildup in between more thorough cleanings.

I started out with the name brands like Tilex. . .

then bought the dollar store stuff . . .

and now – I finally know how to make my own!

My homemade daily shower cleaner spray is actually doing an even better job than the store bought stuff was and that’s because the homemade version includes a dishwasher rinse aid product in the recipe. This has done an awesome job of leaving the shower surfaces cleaner and smoother after a shower.

When it’s cleaning day, I just give my shower tile a little scrubbing with my homemade lemon soft scrub and it looks great. No heavy duty scrubbing is needed because the daily spray keeps things from getting too bad during the week.

This homemade daily shower cleaner spray keeps the water spots from ever forming on the glass windows in the first place! Oh happy day! Those windows finally look cleaner than they ever have before. I’m sure it’s the rinse aid in the mix that’s working the magic.

If you’re a person that likes to use the daily shower sprays, I think you’ll really love this shower cleaner recipe too.

I don’t think I’ll ever go back to the store bought stuff again. It really is that good.

My recipe makes a 32 oz batch, which is the same size as the commercial brands of daily shower cleaner sprays that are being sold. Just save the bottle from a store bought brand once you’ve used it up, and simply refill it with your own homemade version.

To make my DIY version, I begin by pouring a ½ cup hydrogen peroxide, ½ cup rubbing alcohol, 1 teaspoon of dish soap and 1 tablespoon of rinse aid (like Finish Jet Dry) into a spray bottle of at least a 32 oz size. I always use my funnel to make things easier!

Next, slowly add 3 cups of water (the mixture might bubble a little bit because of the dish soap). If you are re-using a 32 oz bottle from a store bought daily shower cleaner spray, you really don’t even need to measure for this step . . . simply top off the bottle with water.

Put the top back on the spray bottle and then slowly tip the bottle back and forth to mix the ingredients.

To use: After showering, mist the spray on the walls of the shower and you’re done. There’s no need to wipe.

Update #2:  I’ve been asked by readers if they should be concerned if there is overspray that lands on the bottles of shampoo, or the shower curtain, etc. I’ve been spraying this around my shower for several years and I’m sure I’ve hit some of the other stuff too, but I have never seen any problem so I think it’s OK to spray away!

Update #3: There have been many questions about whether this mixture is safe on a variety of tub/shower surfaces such as fiberglass, plastic, glass, marble, etc. After doing some research, I believe that because there is nothing acidic in this mixture (no vinegar or lemon juice), that it is indeed safe for all the common bathroom tub and shower surfaces that are non-porous surfaces. For porous surfaces (such as slate) you will not see much benefit as it will just be absorbed. More discussion on this topic can be found in the comments below.

An additional thing to be mindful of is that hydrogen peroxide can slowly break down in the light. That’s why hydrogen peroxide is always sold in those dark brown bottles. If possible, keep this mixture in a cupboard or some other place where it will be dark to keep the hydrogen peroxide at optimum performance. A couple other ideas are to use a dark bottle, or to just add a little more peroxide from time to time. A reader told me she just put a sock over the bottle, and another wraps her bottle with dark duct tape. {Two ways to just make your own dark bottle! 🙂 }

You might also see that this mixture is a light color when you first mix it (because of the rinse aid or colored dish soap that may have been used) but over time the mixture seems to look more clear. Once again, I think it’s the peroxide in the mixture that causes the colors to slowly fade away. 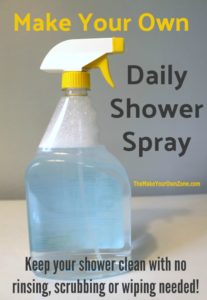 Save money and make your own homemade daily shower spray. This DIY homemade version will help keep your shower clean with no scrubbing or wiping needed!
Author: TheMakeYourOwnZone.com