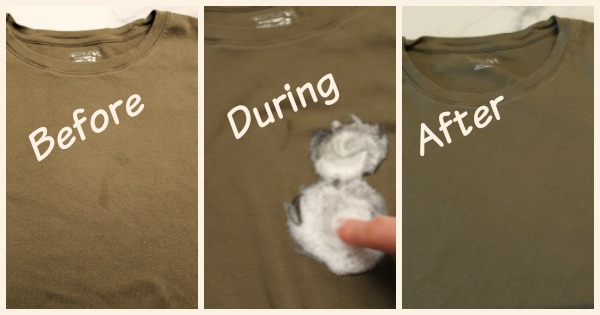 One of life’s more challenging laundry dilemmas is how to get out a greasy stain that’s been through the washer and dryer already.

Is there any hope? Is it a lost cause?

When it comes to laundry stains I often feel like it’s worth experimenting a little bit.  You’re in that sad situation where you’re not going to wear the piece of clothing with the stain on it, but sometimes you can’t bring yourself to just toss out a favorite shirt or pants either.  So before you just give up and fling it in the trash, why not see if there might be some DIY solution?

One of my favorite homemade stain removers that I’ve written about before (more than once!) is a simple mix of Dawn laundry soap and peroxide.  I’ve used it several times with good success.  But there was one time I used it on a pair of brown sweat pants and it left a little bit of a light area where I had used it.  I think I may have left it set just a bit too long and the peroxide did some lightening.

Which brings me to my most current stain.  I had a hand lotion dispenser that was clogged.  I picked it up, started pushing on it, and then – yup, it was suddenly unclogged and a big blob of lotion squirted out onto the olive green long-sleeve T-shirt I was wearing.  {A T-shirt I like and wear a lot}.  I pre-treated it, washed it, and I thought it looked like it had come out so I put it through the dryer. 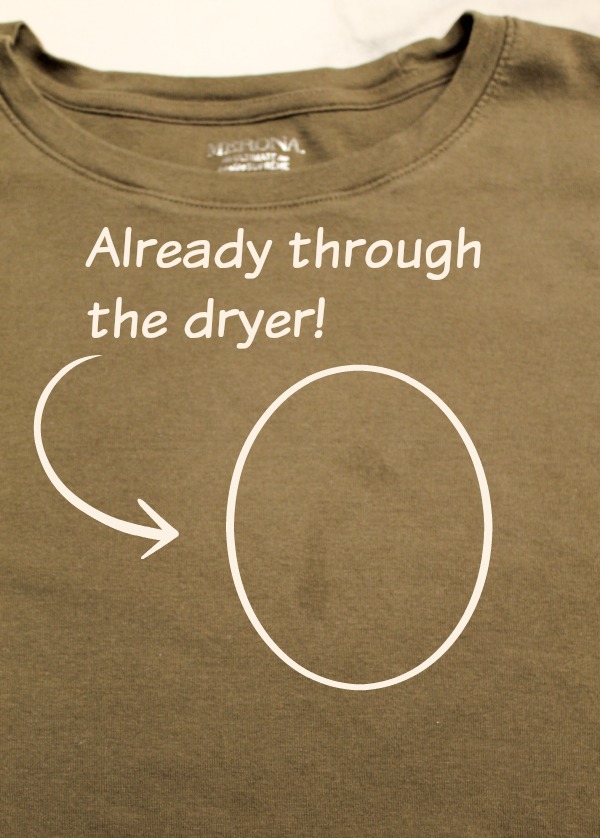 I thought about using my favorite homemade stain remover, but wasn’t sure about the peroxide on this color shirt.  And then I remembered reading a helpful hint saying that Dawn dish soap in the pump dispenser can get out stains, sometimes even if they have been through the washer and dryer. So rather than use Dawn/peroxide mixture, I decided to just try Dawn by itself from the pump dispenser. 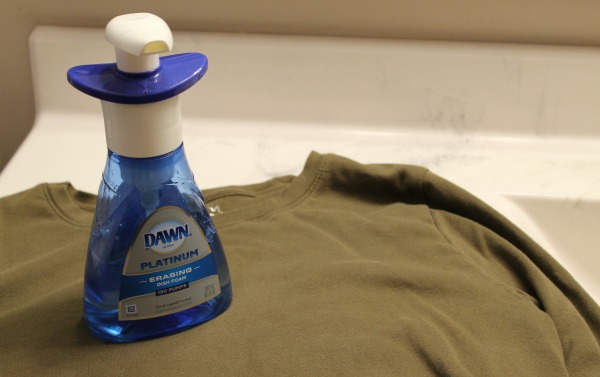 I’ve been using Dawn in the pump dispenser for a long time. However most of the time, I use my thrifty homemade refill. It’s been a great way to stretch a bottle of dish soap along for much, much longer and save money. But every so often the pumps on the bottles give out on me and I have to buy a new pump bottle of Dawn dish soap. And it just so happened that the bottle currently in my kitchen was not filled with my thrifty refill and instead was a new bottle I had to recently buy again. So I actually had the real thing for a change!

So I squirted some on the stain and rubbed it in a little bit.  I let it sit for about 10 minutes and then washed it and dried it as usual. 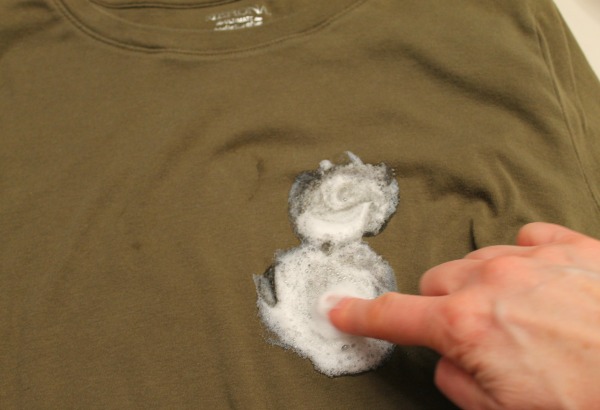 Now why did it work?  I wish I knew.  Is it because the “Dawn Platinum Erasing” soap in the pump dispenser is stronger than plain old Dawn or Dawn Ultra in the regular bottles?  Is it because the aerated foaming soap from the pump soaks into the stain better than the liquid? Is it because all the planets were lined up in a row that day?   Hmmmmm.  Not sure. 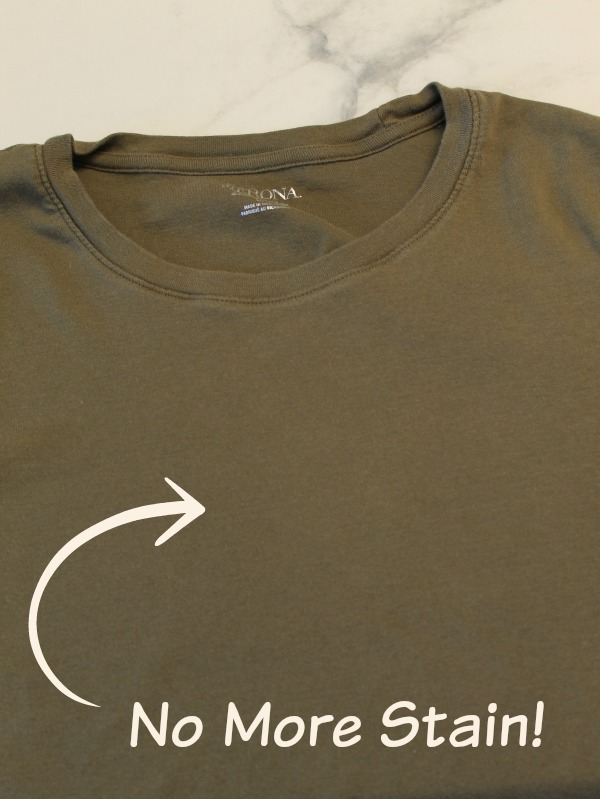 But the fact remains.  Putting the Dawn Platinum Erasing soap from the foaming pump dispenser on the stain did the trick. My oily stain that went through the washer and dryer is now gone. I probably shouldn’t question a good thing and just get my thankful groove on.

5-21-17 Update:  I tried this method a second time with success!  When I took a favorite yellow t-shirt out of winter storage, I found a shadowy stain on the front that must have gone through the washer and dryer unnoticed at the time, and then was put away for the whole winter.  The spot was of subtle (and rather hard to get a picture of) but it was definitely there.  BUT after using this same method with the Dawn foaming soap, I could no longer see any spot on the lower front of the shirt.  Oh happy day! 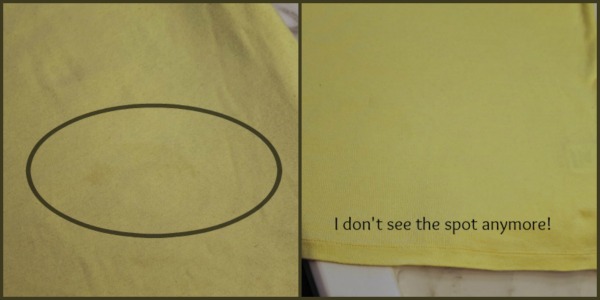 If you too have an oily or greasy type of stain that went through the dryer, you might find it worth the effort to get a bottle of the Dawn foaming soap in the pump dispenser and give it a try.  Just squirt some on the stain, rub it in a little bit, let it set for 5 or 10 minutes, and then wash and dry as usual. It might work for you too!

As a bonus, you can refill the dispenser many times with my thrifty refill method.  I can stretch a bottle of dish soap along for a long time with this strategy and it’s one of my favorite DIY money-savers in the kitchen. 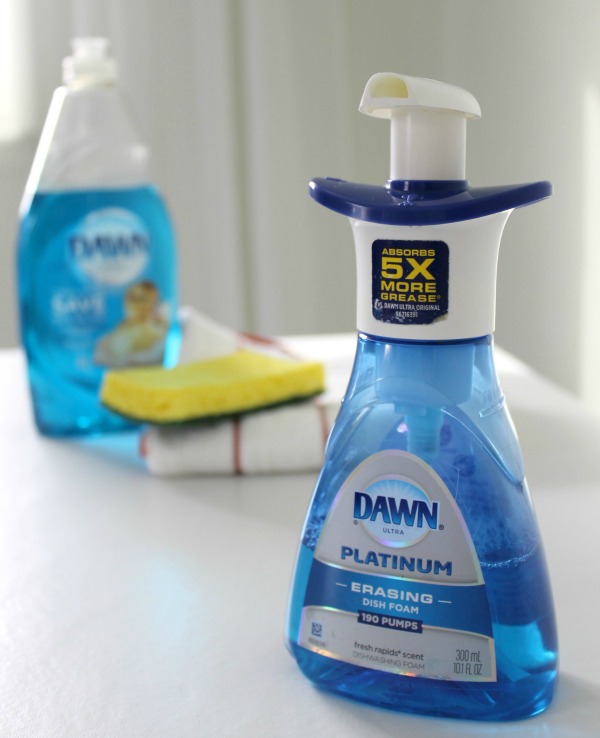