If you’ve done any amount of crafting, you’ve probably heard of Mod Podge, a product that’s been around since the 1960’s and calls itself an all-in-one glue, sealer, and finish.  It’s most often used for decoupage crafts which is the art of decorating surfaces with paper cutouts that are sealed, glued and finished.  But did you know you can make your own Mod Podge? I’ve been doing this for some time now and love it!

Now I know there’s some debate on if homemade Mod Podge is as good as the real thing, but I’m here to tell you that I’ve been using my homemade version for several years and I have always had good results and success using it on my projects – AND – I love that it’s a great money saver too.

So yes, my feeling and experience is that you can definitely make your own decoupage glue and it’s a very easy process too. It’s simply a matter of combining white craft glue and water.

I always use equal parts of water and glue when I make my own Mod Podge.  A very easy way to use equal parts is to just use the empty glue bottle for measuring the water.

First, I empty my bottle of glue into a mixing bowl.  Now that the glue bottle is empty, I can then fill it with water, (which I think is the easiest way to measure out an equal amount of water), and add that water to the mixing bowl. Then I stir the glue and water together until the mixture is well combined, and that’s it!

And of course if you would rather make a smaller sized batch of DIY Mod Podge rather than using the full bottle of glue, that’s simple to do as well. Just remember to measure out the same amount of glue and water (for instance 2 tablespoons of each), and mix them together.

Once you’re done making your own Mod Podge, you can store it in a jar with a lid. I usually just use some type of recycled jar such as a jelly jar or something. (I love to save little recycled jars that I clean with my homemade goo gone).  The jar in these photos is a recycled 8 oz Better Than Bouillon jar which was the perfect size for my most recent batch made with a 4 oz bottle of glue with the equal amount (4 oz) of water added.

And if you’d like an idea to get you started using your homemade Mod Podge, I love, love, love to make these DIY tile coasters.  I look for excuses to make more tile coasters (#truth). They’re fun and easy to make and they’re practical and useful too. 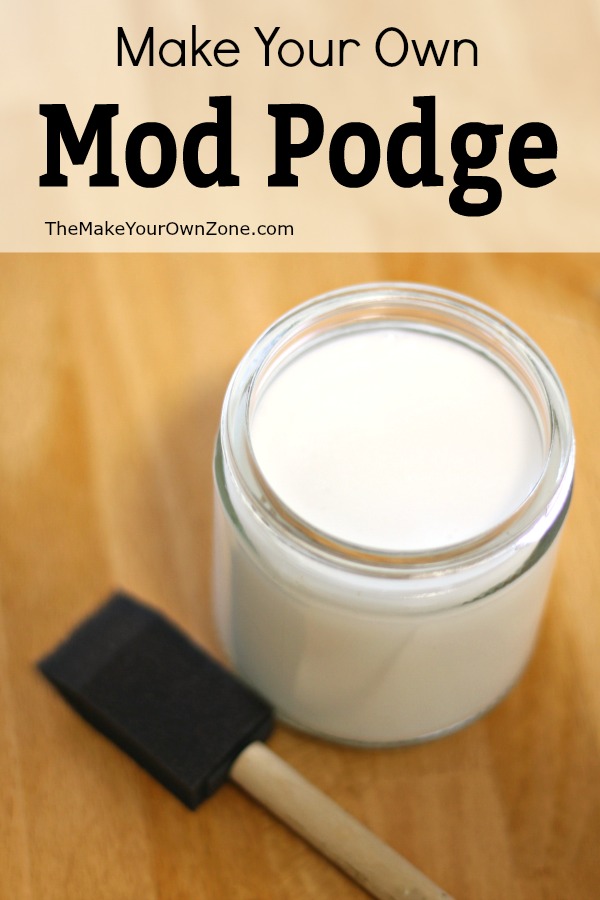 This mixture uses equal amounts of glue and water. I’ve found the easiest way to make a batch is to use the entire bottle of glue, and then measure out an equal amount of water by just refilling the empty glue bottle.  If you wish to make homemade Mod Podge in a smaller size batch that does not require using the whole bottle of glue, just remember to use the same amount of glue and water for this recipe (for instance 2 tablespoons of glue + 2 tablespoons of water).

This post was first written February, 2013 and was updated November, 2019. Here’s the original picture you may have seen floating around Pinterest.