A few months ago I found out that grandbaby #2 is on the way!  A very happy announcement to which I reacted in much the same way as I did to grandbaby #1.

So exciting!!  That’s wonderful!!  I’ll get out my knitting needles!  🙂

Yes, baby projects are some of my most favorite knitting projects and they make lovely homemade gifts.  I’ll be knitting another classic ripple baby afghan (this time with some pink added) and I’ve already knit up a cute little baby sweater that only took me 5 hours. 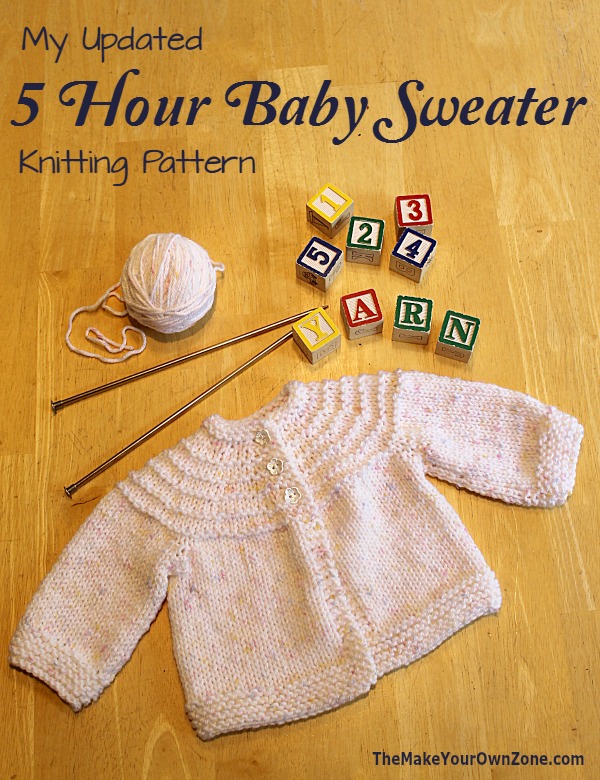 If you’re a knitter you may have seen some version of this Quickie 5 Hour baby sweater pattern before. My research showed that various versions of this pattern have been around since the 1950’s. Once the internet came around (which knitters soon discovered was a great way to share patterns) this baby sweater was on the KnitList website (which closed down in 2010) and has been shared on Ravelry too. Some of these 5 hour baby sweater patterns have more of a “bobble” stitch in the yoke while others have a garter stitch rib pattern in the yoke, which I opted for.

So is there anything new to add to this well-loved pattern that’s been floating around for years?  After knitting through it once I answered that question “Yes” as I had several notations and changes jotted in my margins.  Therefore I decided to type up my revised pattern so I had it for the future, and to share it with others that may find these changes helpful too.

Because this is a longer pattern, I won’t take up space writing it all out here. Instead you can click the link below for a free printable pdf of the pattern:

This sweater is 20″ around, is an approximate 6 month size, uses U.S. size 7 needles and medium (4) yarn.  For the sweater shown here I used the Hobby Lobby “I Love This Yarn” brand in Tweed Pastels.

(Note: I’ve also made this pattern in a 0-3 month size by switching to a smaller needle and lighter weight yarn.  You can read more here:  5 Hour Baby Sweater – Just  A Little Bit Smaller)

A few of my changes:

~ My version uses a smaller sized needle (U.S. size 7). I don’t know how anyone was getting 4 stitches to the inch with medium weight yarn and size 10½ needles as called for in every other version I found of this pattern.  (Of course you are free to use whatever size needles give you 4 stitches to the inch).

~ I’ve added three buttonholes in the yoke area of the sweater.

~ I’ve revised the pattern to only use the more familiar and most often used type of increase (knitting into the front and back of a stitch) instead of the M1 (make one) that’s in all the other 5 hour patterns I’ve found.

~ Several of the other patterns I found had some mysterious instructions about leaving one stitch on your needle when you finished your sleeves.  It made no sense to me and it’s been eliminated from this pattern with new instructions added.

~ The length of the sweater body has been increased slightly so that you work the same number of rows for the body as you do for the sleeves.

I also timed myself to see if this sweater can really be finished in 5 hours.  Yes it can!  In fact it took me almost exactly 5 hours with just a little extra time at the end for sewing the sleeve seams, adding buttons, and weaving in yarn ends. Here’s how my progress looked as each hour went by: 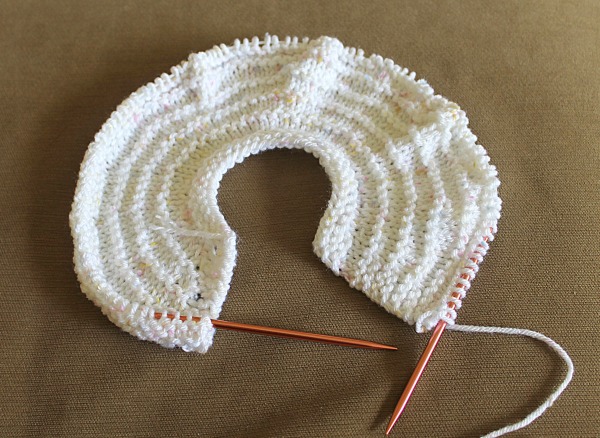 At the end of Hour 1:  I had the yoke done.  This is a good stopping point because the next row is full of increases and markers and I wanted to start that fresh with my wits about me!  (the circular needles I used in this pattern are the 29″ long circular needles). 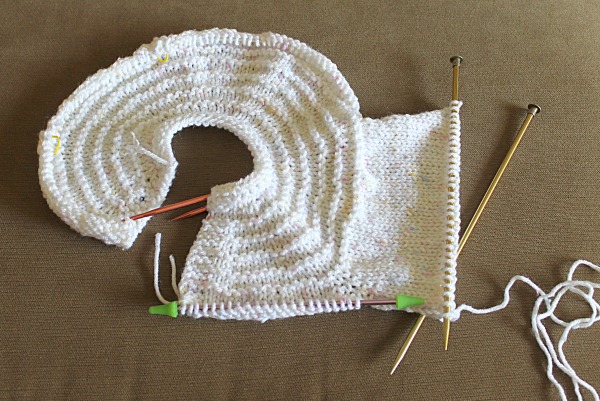 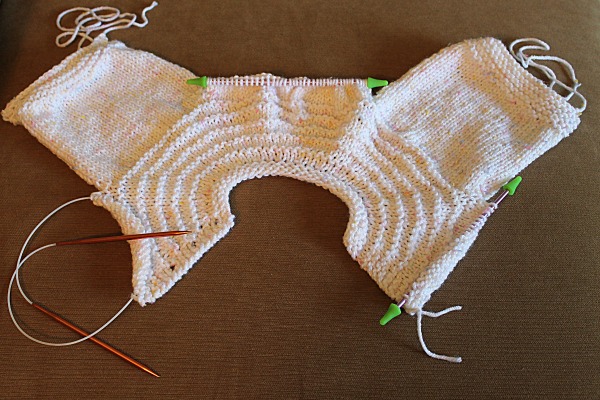 At the end of Hour 3:  The second sleeve is finished.  This was also a good stopping point as the next row entailed putting all those stitches back on that are being held.  Again . . . one of those rows where I wanted to be fresh with my wits about me. 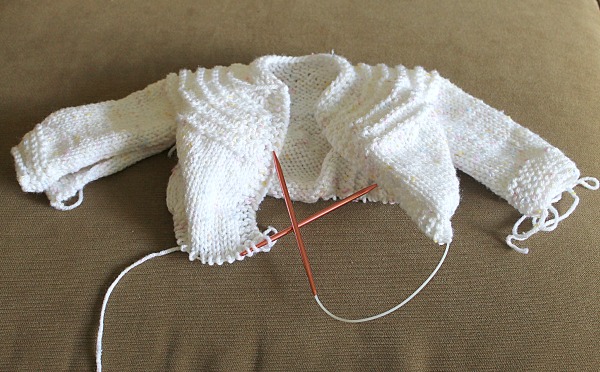 At the end of Hour 4:  I’m about half way done with the body.  All the stitches are back on the circular needles and it’s pretty easy knitting at this point! 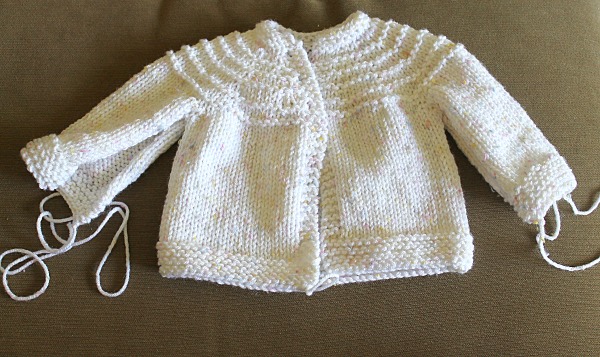 At the end of Hour 5:  We have a baby sweater!  All that’s left to do is the finishing work. 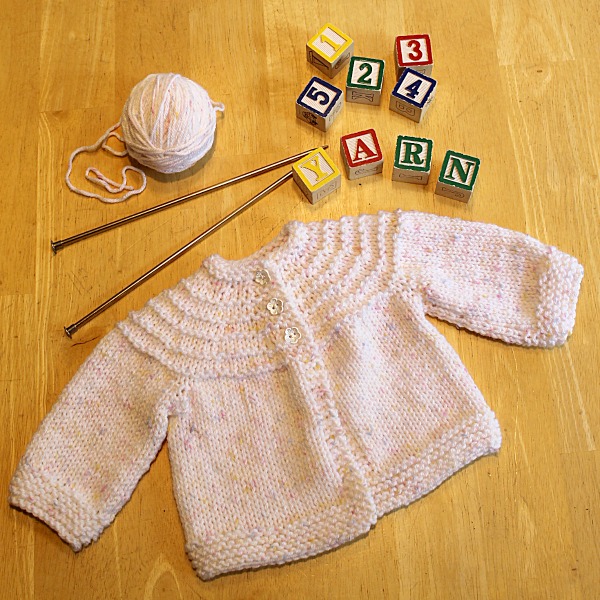 Here’s the link again for the printable pattern:

(Update Feb, 2020: Since first publishing this pattern, I have updated the printable pattern to make it more clear that the increases are Kfb increases where you knit into the front and the back of a stitch to create another stitch. So where the pattern states “Inc” it is a “Kfb”. )

No babies to knit for?  Some other creative offshoots of this pattern that I found are the 7 hour toddler sweater and the 10 hour adult sweater.