One thing I quickly realized when trying to add more vegetables and plants to our daily meals, was that this also meant more chopping, and slicing, and dicing when it was time to make dinner. And at the risk of sounding like a whiner, sometimes it just feels like too much work.

Yes, at the end of busy days, it could feel like soooo much chopping. In fact sometimes that could be the deal breaker when dinner time rolled around. I’ll admit that I get tired and need a few shortcuts. At some time or another I think we all do!

So I’ve liked that I do have this recipe for One Skillet Mexican Quinoa in my stash that’s still a homemade, whole food, plant-based option, but it can be made by just dumping some things in a skillet with only a tiny bit of chopping of fresh cilantro for some garnish at the end. Sometimes if I have a little bit of a green pepper or something to use up, I’ll do a quick chop and add that too (but not always!)

Even if you’re not necessarily cutting back on meat or dairy, this is still a tasty and simple way to get the health benefits of quinoa without much effort. I also like that this recipe has some flexibility too, giving you the ability to adjust the ingredients a little bit. Here’s a look at some of the ingredients so you can see what I mean:

And as mentioned above, if I have a bit of green pepper or something to use up, I might just dump it in too.

So after you’ve opened some cans, measured a bit of quinoa, and poured some broth over them, you just stir it up, add some seasonings, and let it bubble away on the stove. If I’m using my cast iron skillet that seems to run a little hotter, it only takes about 15 minutes for the liquid to be absorbed and for the quinoa to “burst”. In other skillets it takes closer to 25 minutes.

But those are 25 minutes where I’m usually sitting in front of the television watching the evening news and having a glass of wine. Once it’s on the stove, it’s a pretty low maintenance recipe!

And finally, this recipe also freezes well. It makes a pretty large batch – more than hubby and I can eat at a single meal. So I usually put some of the remaining amount in the freezer and it reheats again nicely when we want to use it.

If quinoa is new to you, this is an easy way to give it a try as the mexican flavors give this dish a spicy dimension to help you become familiar with this tiny grain. If you give it a try, I think you’ll like it.

And you won’t have to spend a half an hour at the counter slicing and dicing either! 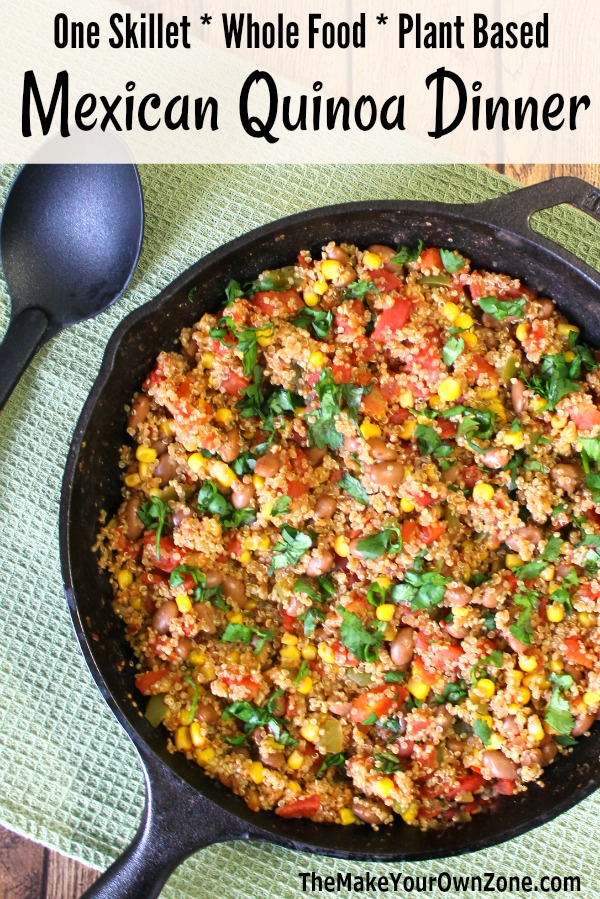