If you’ve followed my blog for a while you may know that almost every winter I share some new homemade birdseed cake recipe that I’m trying. And in most of the pictures (like my homemade birdseed bells) you’ll be able to see it’s usually snowy and cold when I put them outdoors too. But that’s prompted readers to often send me questions saying things like, “I live where it’s kind of warm, are these bird cakes going to melt??”

And I usually I have no good answer for them and say something vague like “Ummm, probably . . . I’m not sure . . . . I always hang my bird cakes out in the winter when it’s freezing up here in Michigan . . . I’ve never tried it in warm weather.” Yeah, I know, that’s a really unhelpful answer.

So I decided it was time to finally learn more about this question and to try a no-melt suet cake recipe for the birds so that I could have an option for summer weather and could share it with all of you living in warmer places too.

How Do You Make Suet That Doesn’t Melt?

But once I stirred the recipe together I could see how they were making suet that doesn’t melt. They were basically making suet dough. Rather than birdseed being held together by a solidified fat which is the case with many homemade bird cakes, this strategy is to make a crumbly type of dough, let it harden up a bit in the refrigerator, and then put it out for the birds. In the sun or the heat it can get softer, but it doesn’t have enough solidified fat to liquefy and melt away.

When I mixed together this no melt suet recipe I used the same method as I use for my other cakes. I first combine the dry ingredients in a bowl, and then add any softer ingredients, and finish by pouring the melted lard over the top. For this recipe the dry ingredients are oats, cornmeal, flour, and a bit of sugar (which provides helpful calories for the birds). Then some chunky peanut butter is used along with some melted lard.

When all these ingredients are mixed together you will have a crumbly dough-like mixture.

The method I liked best for forming this dough into cakes was to use the recycled plastic container from store bought birdseed cakes. Some other square shaped container to use for a mold would work too such as plastic sandwich-size storage containers. I had better luck molding the cakes individually than putting the whole batch of dough in a pan and cutting it into blocks as the cakes wanted to crumble apart when I cut them.

BUT – the good news is I discovered that if the cakes crumble apart, it’s easy to just start over! You can just press the dough back into a mold again, let it harden a bit in the refrigerator, and you’re back in business.

If you like to make your own suet cakes for the birds too but live where it’s warm, perhaps this recipe can be a creative solution and give you a way to provide the birdies with some homemade goodness. 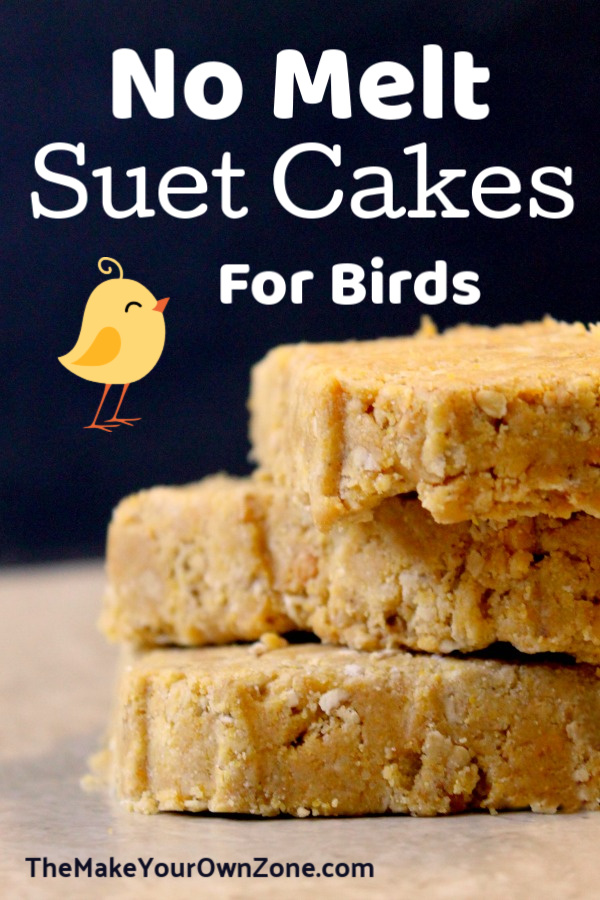 No Melt Suet Cakes For Birds

Make your own suet cakes for the birds using this No Melt recipe that creates a suet cake dough that should not melt in typical summer or warm winter weather.
Yield: 4 Cakes
Author: Beverly

You can also put this mixture into a larger pan, put the pan in the refrigerator for the mixture to harden a bit, and then cut it into blocks.  I found that the cakes crumbled apart somewhat with this method and preferred using individual molds. Extra cakes can be stored in the freezer until you are ready to use them.