The result is this recipe I came up with to make a batch of four homemade bird seed cakes. Now I’ve got my bases covered no matter what size batch I want to make!

My Homemade Birdseed Cakes {Without Gelatin}

For this recipe I’ve used the same method I’ve used in the past. I begin by putting some birdseed in a mixing bowl. I usually like to use a mixture of regular birdseed with a few more black oil sunflower seeds added in.

To the seed, I add some dried fruit (I usually use raisins), some cornmeal (as some grit is good for birds) and for this mixture I decided to use a bit of peanut butter too.

Finally, I pour melted lard over everything and mix it together. Although I’ve made some birdseed cakes in the past that use gelatin, for larger batches I much prefer lard as it’s cheaper, very easy to melt in the microwave, and seems to be liked by the birds too.

Related Reading: Where to look for lard in the grocery store

Once you’ve got everything mixed together, it can be put in a pan lined with parchment paper so the cakes can harden.

This recipe is designed to go into an 8×8 square pan and when hard, the mixture gets removed from the pan and cut down the middle in each direction which ends up giving you four cakes that are each about 4″ square.

When cutting the cakes things will crumble a little bit, but I always save those crumbles and sprinkle them around on the ground under my feeder. The birds (and squirrels!) appreciate this too.

Then the only thing left to do is hang your cakes out for the birdies to enjoy. Rather than hanging my suet cage from a branch, I’ve been fastening it with a nail in the crook of my tree. The birds seem to linger a little longer because they can easily perch on the tree while they are pecking at the cake. Woodpeckers especially seem to sit there for a quite a while and enjoy.

The complete printable recipe for this four cake batch size recipe is below. And if you like feeding the birds too, check out some of my other recipes for more bird feeding inspiration! 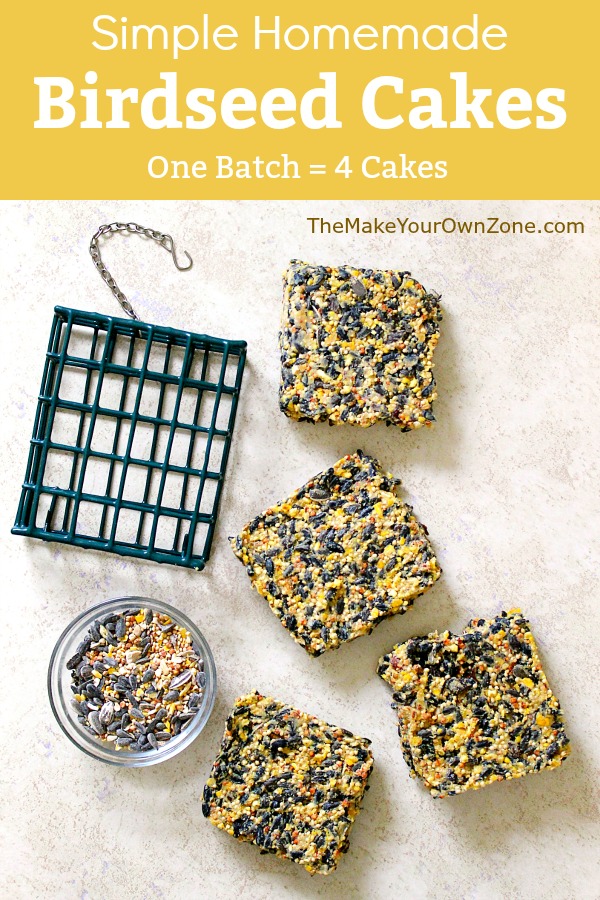 It's fun and easy to make homemade cakes for your feathered friends. This batch will give you four cakes that are 4" square.
Author: Beverly

If you do not have cornmeal, flour can be substituted. You can use other types of seed in these cakes if you wish too in any combination to give you about 3 cups total of seed being used.
Share104
Pin14.1K
Email
Share
14.2KShares