Many people like to start their day with a homemade smoothie, but I’m just the opposite. I like to end my day with a smoothie. My favorite end-of-the-day snack used to be a big bowl of ice cream while I watched TV, but I got to the point where I wasn’t happy with that habit anymore and wanted a change for the better. I decided a good alternative might be to try smoothies instead because they were still cool and creamy (like ice cream) but could be made with healthy plant ingredients instead. I was on the right track with this healthy substitute and I’m happy to say that I’ve been able to successfully give up my ice cream habit!

But the challenge with end-of-the-day smoothies was that it was indeed the end of the day. That’s when my energy and creativity is about used up and I never felt like thinking about exact ingredients or measurements or recipes or anything like that. But as I stuck with it and kept making myself trot in the kitchen to make a smoothie even though I was kind of tired, I found myself falling into a pattern of how I was mixing them together without using any recipes or measurements. And it was a pattern that was working so well that I’ve now dubbed it my Smoothie System.

One quick side note here is that I’ve been thinking more and more about “systems” ever since I read James Clear’s book Atomic Habits and started subscribing to his weekly Thursday newsletter. He continually makes the point that if you really want to see change, you have to come up with new habits (or systems) to help yourself move toward that change. One quote of his that I’ve printed and put up in my office is, “You don’t rise to the level of your goals, you fall to the level of your systems”. Without a good system in place to help us, we usually get nowhere no matter how many goals we set or how much we hope to change. And bad systems can make us fall and move us in the wrong direction! It’s our routine habits that turn into “systems” that determine our direction.

That’s why we want good systems. And that’s why I needed a Smoothie System.

My Habit (System) For Making Smoothies

About now some of you may be thinking , “Hey, smoothies are just a bunch of stuff blended together that anybody can make. Who needs a system? Relax already!”

Yes, I hear you and I agree that you really don’t need a recipe to make a smoothie but a system is not a recipe. Instead it’s a set of steps (that eventually become your habit) that makes you confident in your ability to make any kind of smoothie using whatever you have knowing it will have the same nice creamy consistency every time. It turns making a smoothie into a no-brainer operation. And when it’s a no-brainer kind of a thing, you find yourself actually doing it. Plus, when I now see other recipes for smoothies that sound kind of yummy, I just think about how I could use those type of ingredients using my simple system and I make my own versions that are just the right size for me that turn out delicious!

So, here finally is my system. It’s a fresh/frozen/fresh layering method:

I usually try to make my layers of about an equal size. Having fresh fruit on either side of the frozen fruit gives the blender blades something softer to start with too, no matter which way the blender you are using is situated.

Adding the liquid is the least exact part. Usually I add my almond milk until it rises to about one third of the way up the container to almost half way up the container. If I’ve used a fruit with high water content (such as melon), I’ll use a little less liquid. Sometimes after I do the blending it might still be a little thick, so I add a bit more liquid and blend it just a bit more.

By using the Magic Bullet as part of my system, the smoothie is blended directly in the container I’ll be drinking it from. By using a ratio of 2 parts fresh fruit to 1 part frozen fruit, the smoothie is always cool and creamy. By using a visual system of layering, measuring can be avoided. Having these factors as part of my Smoothie System habit let’s me create all kinds of smoothies with very little effort or thinking.

The smoothie in the pictures here is not a glamorous smoothie – BUT – it is one that I make a lot at the end of the day and I wanted to use it as an example because it’s the reality of what my smoothies usually are – just simple healthy goodness.

The first layer is fresh melon, the second layer is frozen banana, and the third layer is fresh strawberries. I always use almond milk for the liquid (usually my homemade almond milk), although other liquids such as juice could be used too. When I’m tired at the end of the day, I can almost always find enough remaining energy to still whip up a smoothie like this one.

Sometimes I make what I call my “Grocery Day” smoothies too. I stick with my layering smoothie system to use up remaining bits of fresh or frozen fruit before I go to the store and stock up on new supplies. A smoothie before I go shopping keeps me fueled up with energy from healthy ingredients too.

I also love that I’ve been able to adapt other recipes I find for smoothies that sound yummy, but I can make my own simpler versions of them in a one-person size serving with no measuring using my system. I just think of a way that I can make them using the fresh/frozen/fresh layering system. I’ll write in more detail in a few follow-up posts about these, but here’s a quick sneak peek at some yummy ones I’ve made:

My layering smoothie system has helped me enjoy lots of new smoothie flavors. I just stick with my habit of fresh/frozen/fresh and I’m good to go!

Have you been wanting to drink more smoothies too? Using this system (or creating your own like it) will empower you to be able to do exactly that with speed and efficiency. You’ll have a way to always whip up a healthy drink without the worry of measuring or needing a recipe. I’ve found it to be a wonderful solution for making your own smoothies. ❤️ 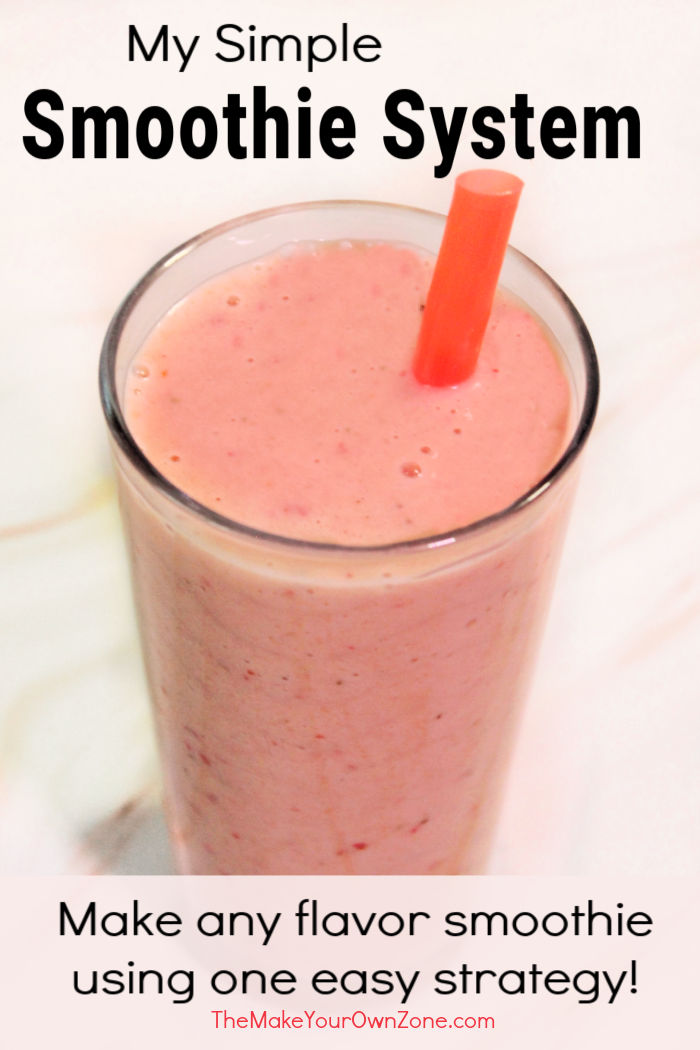 This simple method that I call my Smoothie System has helped me create all kinds of delicious, cool, and creamy smoothies with no need for a recipe or measuring. You can create your own flavor combinations or use the system to easily adapt other smoothie recipes. This system uses the visual strategy of creating three layers in your blending container.
Course: Beverage
Cuisine: American
Keyword: Homemade Beverage, Smoothie
Yield: 1 serving
Author: Beverly

Note: If adding other flavorings (such as spices, peanut butter, etc.), I usually add them between the 2nd and 3rd layers.
Share
Pin
Email
Share