I’ll begin by saying I never thought I would use the words “favorite” and “oatmeal” together in a sentence. For years I couldn’t stand the stuff. To me oatmeal was a bland, mooshy, gooshy mess that I could barely get down and so I avoided oatmeal for a long, long, long time.

But a few years ago I decided maybe I should try to change my ways after reading again and again that whole grains (like oatmeal) are so much healthier for you than most of the processed boxes of breakfast cereals.

I”ll also say at this point that Bob has been an oatmeal eater for longer than I have. From time to time I would ask him if he wanted me to create some “make your own oatmeal packets”. That sounded like a good blog post idea to me! But he would always say, “Nah, that’s too much fuss. It’s not that hard to just dump some oatmeal in your bowl”. I’m finding out now how right he was about that and I couldn’t agree more.

Here’s what finally turned me into an oatmeal eater.

The Ingredient That Helped Me Finally Eat Oatmeal

What I’m sharing here today is a slightly modified version of a recipe I first came across in a book I’ve mentioned here on the blog before, Prevent and Reverse Heart Disease. It was a fairly ordinary oatmeal recipe however it included an ingredient I hadn’t thought of before. Apple juice!

Yes, apple juice was the ingredient that finally helped me eat my oatmeal. Instead of water or milk for the cooking liquid which I found bland and unappealing, apple juice seemed to instead give the oatmeal that extra boost of flavor and bit of sweetness I needed. Most of the time now I do about half apple juice and half water for the liquid portion, which still provides enough flavor.

This method also uses bananas and raisins which also were ingredients that helped me enjoy my oatmeal a little bit more too.

Now, even though sometimes I can hardly believe it, I eat oatmeal almost single stinkin’ morning now. And I like it! Here’s how I do it.

How I Make My Own Oatmeal

As mentioned earlier, I’ve decided there’s no need to make any little premeasured homemade packets. I also never measure anything when I make my morning oatmeal and feel there’s really no need to measure once you get used to making this. However for the sake of writing about it, I did measure things out to help give you some guidelines for getting started.

To begin, slice some banana into your bowl. I usually do about a half to a third of a banana depending on how big the banana is. (Note: I’ve learned that the other half of the banana keeps OK in the refrigerator for a day or two. I keep it in the peel and when using again, I throw away the first slice I cut which was the exposed edge that can get a little mushy).

Then I cover the banana with quick cooking oats (about a 1/2 cup).

Next, I sprinkle on about 2 teaspoons of ground flax seed. This is optional, however I like to make this addition as flax seeds are known to be a good source of a healthy fat and protein.

Then I sprinkle on some raisins (probably a couple tablespoons).

Then comes the liquid. I add apple juice until things are just moistened. Then I add water for the rest of my liquid. This is about a 1/2 cup of apple juice and a 1/2 cup of water. However sometimes if I’m in a hurry, I just do all apple juice. I try to always buy apple juice that is 100% juice with no added sweeteners.

Then I microwave for 1 minute and 25 seconds. Kind of a random time, I know, and I’m not quite sure how I ended up with that, but that’s what I do every day and it works!

Then just stir things up and enjoy. Sometimes things are just a little bit soupy yet when you take it out of the microwave, but the oats keep absorbing and it will be fine.

I debated whether this simple ordinary oatmeal recipe was almost too simple to be worthy of a blog post. However because it has been such a helpful way for me to finally get used to eating oatmeal, I thought it might be a solution for others. If you haven’t liked oatmeal in the past either, but would like to incorporate this healthy grain into your morning diet, this might be a recipe that you will like too. Plus, it’s a very inexpensive breakfast option as well.

Give apple juice a try for cooking your oatmeal – I think you’ll like it!

And now that I’ve taken some of the first baby steps when it comes to oatmeal, I’m hoping to expand things a bit more this year and start experimenting with steel cut oats and overnight oats too. Wish me luck! 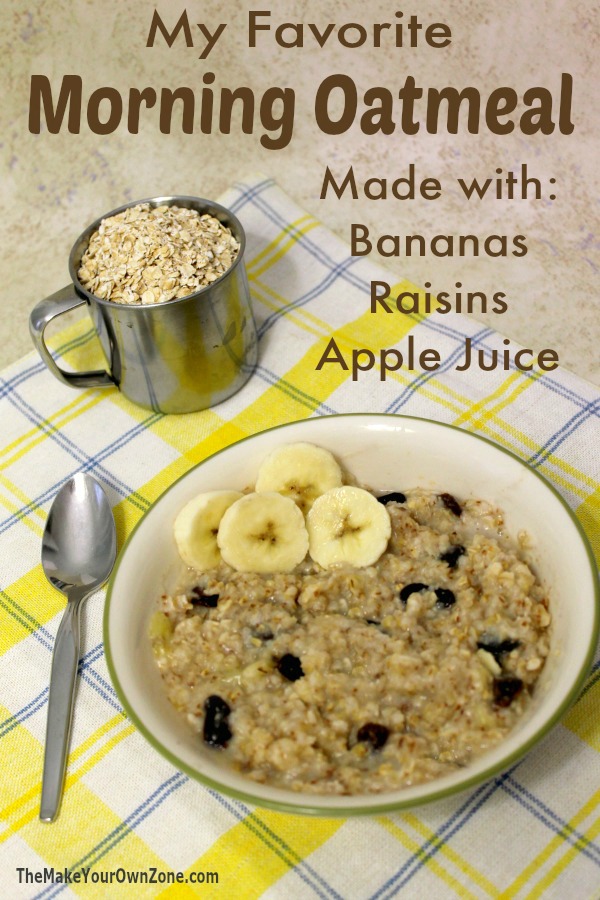 Have you avoided oatmeal in the past? This recipe that uses the flavoring of apple juice might be just the solution you need to start eating your oatmeal!
Prep Time1 min
Cook Time1 min
Course: Breakfast
Cuisine: American
Keyword: Microwave, Oatmeal
Yield: 1 Person
Author: Beverly

You can also use 1 cup of apple juice for this recipe instead of using half apple juice and half water.  The other half of the banana will keep OK in the refrigerator for a day or two.  Keep it in the peel and when using again, throw away the first slice you cut which was the exposed edge that can get a little mushy. As times goes along you will probably find there is no need to measure this recipe. Just sprinkle in the amount of oatmeal you want in your bowl, and add the amount of apple juice/water needed to cover the oats.