I’ve wanted to make my own chapstick for some time now but one thing was always holding me back. I didn’t need a recipe that makes 25 tubes of chapstick! Or even 12 tubes of chapstick! But those are the kind of recipes you’ll almost always come across in your search for how to make homemade lip balm.  Not exactly what an empty-nester like me is looking for.

So instead I’ve come up with my own friendly little formula that let’s me make lip balm at home with natural ingredients but in a much smaller batch, or any size batch for that matter, because it’s all about using parts.  I call it my 1-2-3 Chapstick (I’ll explain why in a minute) and the smallest version I’ve made of this formula creates just two tubes of natural lip balm. That gives me one for in the house and one for in my purse. Perfect! 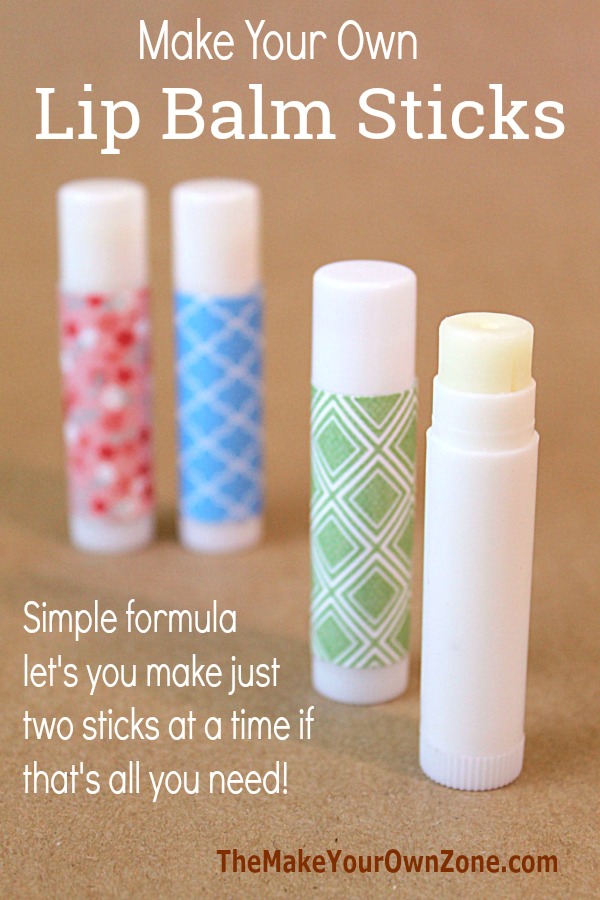 How Do You Make Natural Lip Balm?

When you make your own lip balms and chapsticks, you’ll find that most recipes always use the same three components. These ingredients are cocoa butter or shea butter, beeswax, and some kind of oil.  Knowing this, I came up with the following ratios for making homemade tubes of chapstick:

You simply melt these three ingredients together and then pour it into empty lip balm containers. 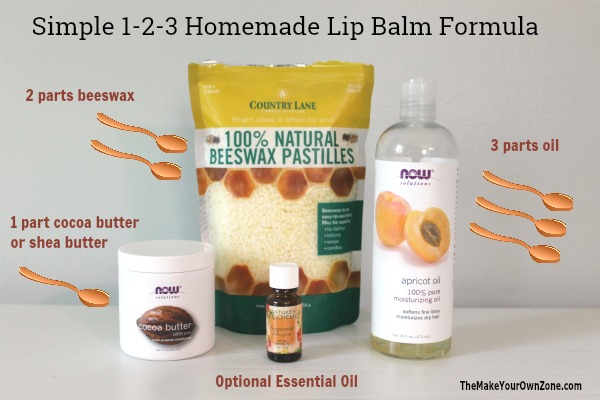 Now of course the one little wrinkle in this program is that you can’t just buy one or two of the empty tubes that you’ll need to pour your mixture into.  The tubes I used were sold in a 12 pack at Hobby Lobby.   BUT – at least you’ve only used a few of the tubes at a time and the remainder of the tubes are available if and when you want to make more (for instance I’m hoping to try making a tinted version of my homemade chapstick too).

I also checked out how much one of these empty tubes holds. I filled an empty tube with water and then emptied the water and measured it. It was just one teaspoon! This is why when you see recipes for homemade lip balm calling for 2 or 3 tablespoons of every ingredient, you can be sure your final resulting mixture is going to fill up a bunch of those little empty 1 teaspoon tubes. 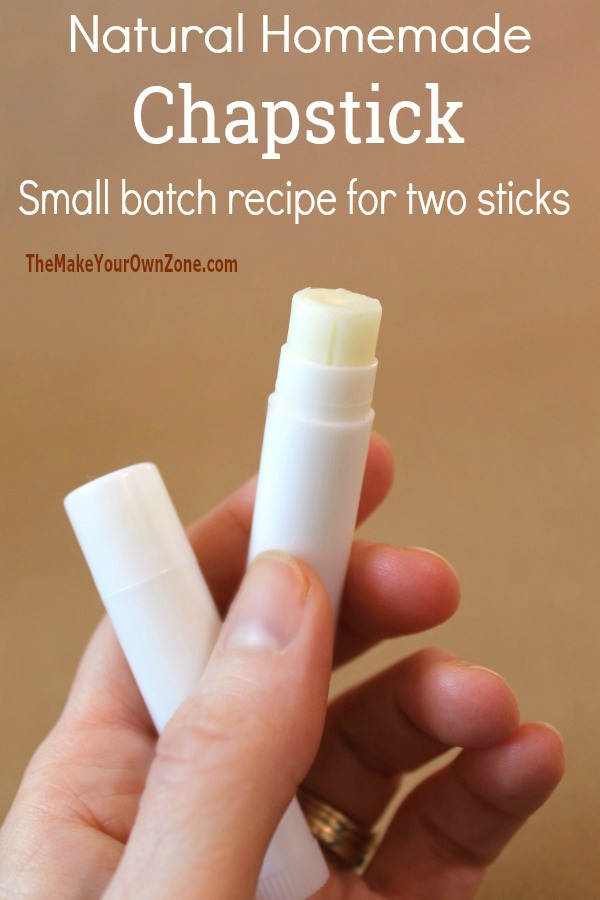 How To Make Just 2 Tubes of Natural Lip Balm

So here’s how I used my 1-2-3 Formula to make just two tubes of homemade chapstick. When using the concept of “parts” for making a recipe, I always just think of it as whatever measuring utensil I have in my hand. To make a very small batch of natural lip balm, I used my measuring spoon that’s a 1/2 teaspoon as my part as follows:

When these amounts were mixed together, it created enough liquid to fill just two of the empty lip balm containers.

Now if you’re alert you may be wondering why those amounts up there total 3 teaspoons when I just told you empty lip balm containers hold 1 teaspoon.  Shouldn’t it fill three tubes?  As best I can figure on that one, it’s a difference of measuring by volume on the “hard” ingredients.  However the ½ teaspoon volume amounts above will equal about 2 teaspoons of liquid when melted together.

Now of course if I was going to write out the recipe above without being really obvious about using the concept of parts it would look like this: ½ teaspoon cocoa butter, 1 teaspoon beeswax, and 1½ teaspoons of oil and in fact in the printable recipe below, I’ve written it out that way for you.  BUT, I wanted to make sure you could see how to think in parts when you make this recipe because then you can make it in any size you want!

Here’s one more quick version of this recipe that will give you four tubes of homemade chapstick. This version uses a teaspoon as our part:

Once again, it’s easy to see the 1-2-3 formula at work!  These measurements will give you about 4 tubes of homemade chapstick.  Still a much smaller batch than many other recipes out there.

And if you do want a larger batch, you can use a tablespoon as your part which I’m guessing will probably give you about 12 homemade chapsticks. 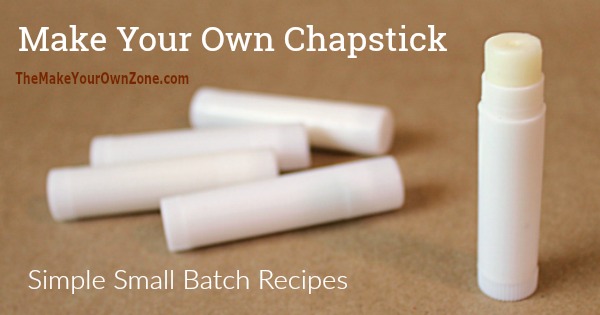 There’s also some flexibility with the ingredients in this 1-2-3 recipe for homemade lip balm. Let’s take a look:

For the “one part” –  I like to use cocoa butter, but you can also use shea butter if that’s what you have on hand or if that’s your preference.

For the “two parts” – I find beeswax pastilles easiest to use because they are small and easy to measure in these smaller amounts. However if you have a block of beeswax you can also just grate up the amount you need.

For the “three parts” – I currently have a bottle of apricot oil I’m using up that’s worked very nicely in this recipe. However you could also try coconut oil, almond oil, jojoba oil, or even olive oil in this recipe too.

Optional Essential Oils – I’ve been adding a few drops of peppermint essential oil to my homemade tubes of lip balm and I love the extra zing of mint that it adds. However it’s optional and if you don’t have it that’s OK.   There are probably other essential oils that could be used too, but I’ve only personally tried the peppermint.

Equipment – To melt the ingredients I’ve just been using my glass measuring cup in the microwave. For the small batch recipes it just takes a couple 20 second shots, and things are melted.  The beeswax pastilles are the last thing to melt.  If there are still some visible pieces of beeswax after 40 seconds in the microwave, I usually just swirl them around and they melt away without needing another shot in the microwave.  (You can also use the double boiler method for melting by putting your ingredients in a glass container over a pot of boiling water until things are melted).

Pouring – I like to use my glass measuring cup for melting the ingredients together as it also has a spout for pouring. I make sure I have a towel around my hand while I am holding the empty lip balm tube that is being filled just in case any hot liquid might drip over onto my hand.

Clean-up – While my glass measuring cup is still warm, I wipe out the residual liquid from it with paper toweling, getting is as cleaned up as I can this way first before the mixture hardens up. Then I give it a final cleaning with soap and water.

Decoration – If you’d like to make your homemade tubes of chapstick look a little fancier, you can cover them with a small piece of scrapbook paper.  I cut pieces that are 1¾” x 2½” and fasten them to the tubes using double stick tape. 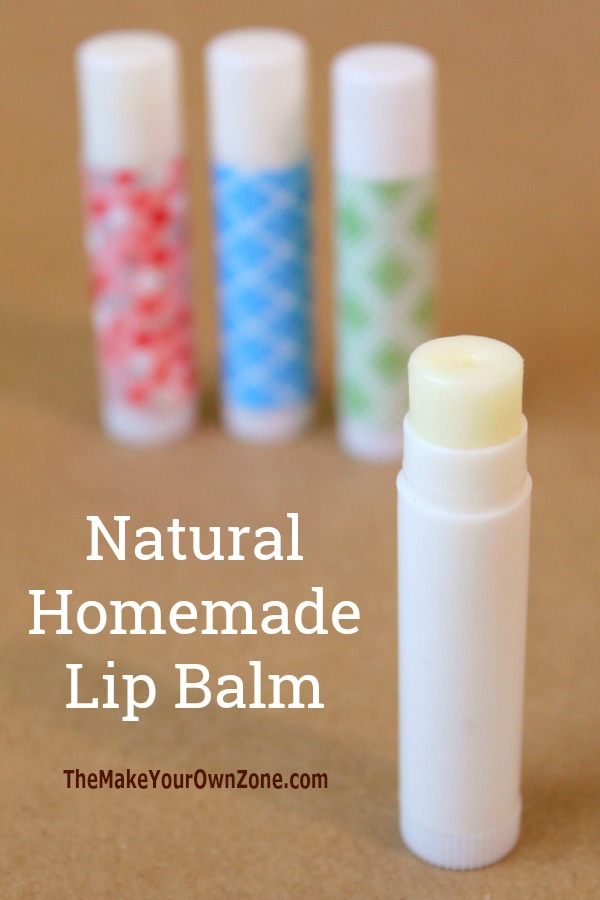 So there you have it, everything you need to know to make your own chapstick! I’ve really enjoyed this recipe so far and have found it to do a great job of moisturizing my lips. My hope is to go just a bit beyond one precise recipe, and instead also give you the method and formula that makes it work, which in turn keeps flexibility and resourcefulness part of the equation too.

If you remember the 1-2-3 formula, you can go forth and make your own natural lip balms in the size batch that works best for you!

This formula for homemade tubes of natural lip balm let's you make batches in any size you need.   The master recipe is given below, followed by two examples to make just 2 tubes, or 4 tubes. Choose what works best for you!
Author: TheMakeYourOwnZone.com