This recipe is an oldie but a goodie and has been a staple in my recipe box for years.   When I want a homemade sweet treat, this recipe is a quick and easy one to fall back on that doesn’t take much effort because you can breeze through it with no measuring.

I think this recipe first appeared on the cans of Eagle Sweetened Condensed Milk over 30 years ago and were called Magic Cookie Bars.  We’ve always called them Magic Bars at our house too, and they do go together almost like magic because you simply layer on the ingredients. 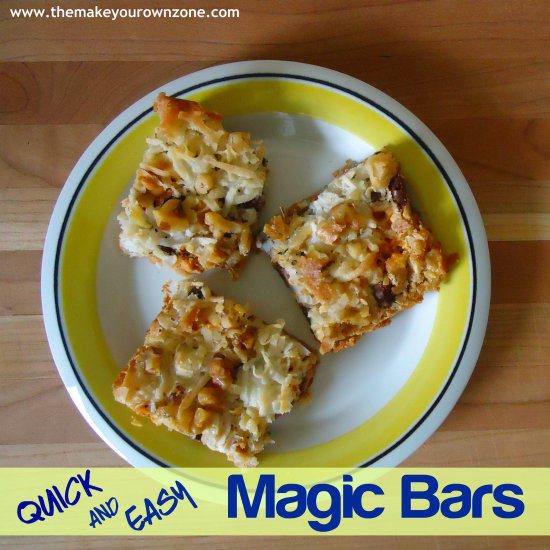 There’s lots of variations of this recipe floating around and now I’ll add my version to the mix too.  Here’s a few notes on my method:

*  You could probably use a food processor to crush your graham crackers but I’m old school and still use my rolling pin.

*  There’s no need to measure the ingredients.  When I layer on the chocolate chips and butterscotch chips, I just use about a half of a 12 oz bag which equals about a cup (although some manufacturers are now selling 11 oz bags for the same price . . .Grrr).

When the butter has melted, remove the pan from the oven.  (I usually get impatient and pull the pan out before the butter is totally melted and just swirl it around some more myself to help it keep melting)

Sprinkle the crushed graham crackers over the melted butter, distributing them evenly and patting them down a little bit as well.

Next, sprinkle around the chocolate chips and the butterscotch chips.

Follow this with a layer of flaked coconut and then a layer of the chopped nuts.

Pour the sweetened condensed milk over everything, distributing it evenly around the pan.