Got cucumbers?  If you do, then you can easily have pickles too!

I’m loving this simple recipe for homemade pickles that doesn’t require any canning and can be made one quart-sized jar at a time.  This is just the right quantity for my household size and of course if you need more, you can just keep filling up more quart sized jars as needed.  It’s a natural and simple method and gives you a tasty crisp pickle without any of the food dyes or other chemicals that can be lurking in the pickles on the store shelves.

I was inspired to give this a try after reading the pickle recipe at the DIY Natural website.  It was one of the few recipes I could find with instructions for how to make a “refrigerator pickle” (meaning it doesn’t require canning), AND I wanted to be able to use a quart sized canning jar which was exactly the size called for in their recipe.

So here’s my adapted version of a homemade refrigerator dill pickle.  It’s a great way to put those cucumbers to good use and enjoy a delicious pickle too! 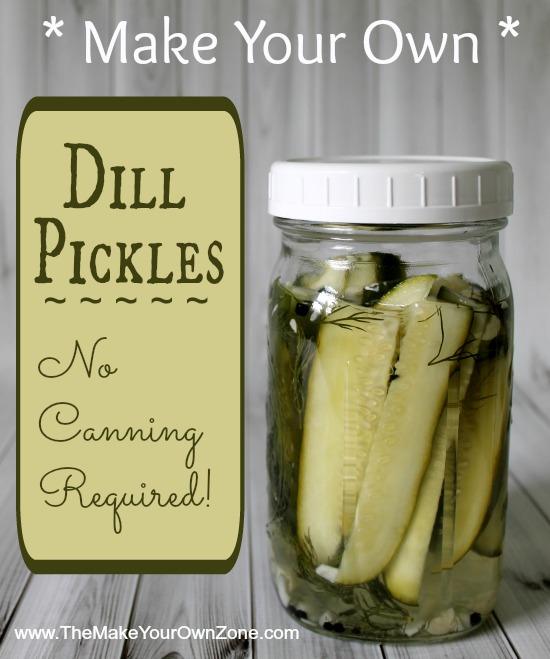 Make Your Own Dill Pickles

Begin by slicing your cucumbers.  I like to slice mine into spears.  I put about 16 spears in a quart jar because that’s the size batch I wanted, however you can probably pack more in if you want a larger batch. 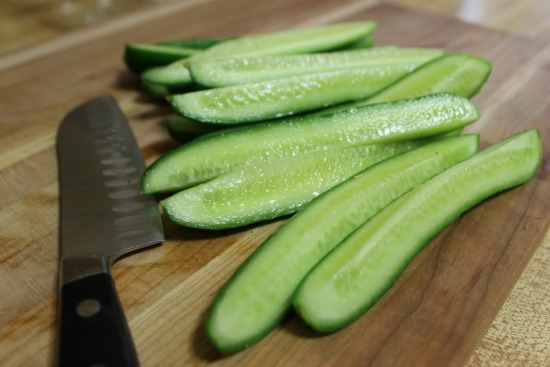 Put your sliced cucumbers in your jar.  Add in the dill, garlic, salt, and pepper.   Next add in the 3 tablespoons of vinegar, and then top it off with the distilled or filtered water until the cucumber slices are covered.  Put the cover on the jar and then shake it a bit to get things mixed together.

Let the jar stand on your countertop for 12 hours.  Then shake the jar a bit again and set it upside down (make sure the lid is on tight!) and let it sit for another 12 hours.

~~ I tried this with fresh dill, dried dill weed, and with dill seed.  I was a little surprised that the batch with the dried dill weed was our favorite (I thought it would be the fresh dill).  The dill seed didn’t seem to do much for the flavor and we probably won’t use that choice again.

~~ While the dried dill weed gave us our batch that we rated as the best flavor, the dried dill does float around the top of the pickle brine and wants to stick to the pickles.  Because the flavor was good, we didn’t let this minor detail bother us.

~~ While table salt is safe for pickling, kosher salt or sea salt are usually preferred as they are a purer form of salt with no iodine added.