One of my most popular posts has been the one about the Homemade Furniture Dusting Spray that I use.  It’s an easy mixture of mostly water with some vinegar, olive oil and essential oil mixed in.  I’ve found it to be a very thrifty and easy way to clean wooden furniture and have not yet encountered any downside to using this spray.  In fact it’s quickly becoming one of my favorite cleaners!

.  One of the first things I wondered when I found this recipe was how could the oil and water mix?  Aren’t those two things that everybody knows don’t mix together?  The olive oil does float to the top, however I just shake it often when I’m using it and don’t worry about it.  I think the olive oil in there helps to condition the wood which was the point of putting it in the mixture. 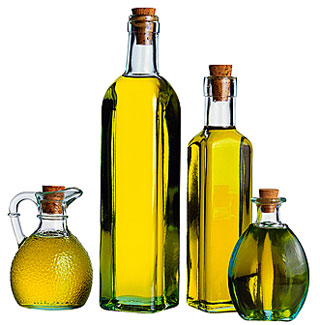 A NEW QUESTION ABOUT THE OLIVE OIL
My only thoughts about the olive oil in the dusting spray so far had been how it incorporated into the mixture.  However a reader recently asked me, “Does the olive oil get rancid?”  I’ll be honest and admit I had never thought about that.  But it was a question that got me thinking so I did a little research on the subject.  Let’s take a look.

WHAT DOES RANCID MEAN?
Let’s first take a look at what it means for something to be rancid. The term rancid refers to the deterioration or decomposing of fats.  Heat, light, and oxygen are the main culprits that can cause this deterioration  Things like butter, nuts, and oils are items that can go rancid.  If you have ever bitten into a rancid nut, you know the bitter tang that a rancid flavor can have.  When olive oil goes rancid it is also an issue of the taste being off and it takes on a more bitter quality.  One article I read, however, felt that  most of us are accustomed to the taste of rancid olive oil!  If only we were buying the expensive stuff we would really know what it was supposed to taste like  . . . . or so they said.

I could not find anything that said rancid olive oil was poisonous or dangerous.  It’s more about losing the optimum flavor quality.

There was really no set timeline either for when an olive oil could start going bad.   A general rule of thumb is if you store your olive oil in a cool dark place it should be good for a couple of years.

IS THERE A SMELL?
So it seems like most of the issues around rancid olive oil are about the taste being less than desirable in our foods.  Does that mean there is no smell to a rancid olive oil?  According to a couple of things I read, if you put your nose up to the olive oil bottle and take a sniff and it smells like crayons or a cardboard box, well then you might have a rancid olive oil.  On a scale of scary smells, I would put crayons and cardboard boxes near the bottom of the list.  🙂

I’M NOT WORRIED
Frankly, I was not too worried about the rancid olive oil issue before I started my research, and after looking into the subject a little more I still feel the same way (maybe even more so).  Here are my reasons:

–  There is a relatively small amount of olive oil in the mixture – just a couple teaspoons.

– You immediately wipe the spray off the furniture.  The oil in the mixture conditions the wood, but does not linger on the surface.  There is no residual smell of the olive oil on the furniture.

– Taste is the main issue in a rancid olive oil.  It does not change color or texture or become dangerous.  As we are not eating our furniture dusting spray, it does not seem to be a cause of great concern.

– I have never noticed the olive oil in my cupboard becoming rancid.  I think I use it up too quickly for this to happen.

– Likewise, I use up my furniture dusting spray fast enough that it would never sit long enough for the oil to go bad.

In summary, I have never noticed a problem with rancid olive oil in my homemade furniture dusting spray and am not really worried about this in the future.  Do you agree?  Leave a comment and let me know what you think!