This recipe was not the recipe I had planned for this week.  My original plan was to share a recipe for homemade eggnog made with EggBeaters (an egg substitute), one of the recipes I found while sorting through a box of old recipes my mom had cut out and saved over the years.

But as can sometimes be the case with my DIY adventures, not everything that looks good on paper will actually turn out good in reality.  This eggnog didn’t have the same taste or creaminess or smoothness of the real thing and was just plain *blech*  It was time to move on to Plan B.

And Plan B was to share this recipe for Glazed Almond Bars that I was SURE would turn out because I’ve been making it for over 20 years!

Even though I’ve had this recipe a long time, it’s not a recipe that I make just any old time.  I usually reserve these bars for the holidays or other special occasions, kind of like how I don’t make fudge unless it’s Christmas.  These bars are rich, decadent treats that I cut into small pieces and they make a nice addition to a plate of goodies to bring to gatherings or for gifting during the holidays.

Another reason I only make this recipe during the holidays is because of the somewhat troublesome ingredient of almond paste. . . which is troublesome only because it’s getting harder and harder to find in the stores.  But apparently the stores will give this ingredient some priority during the holidays when I often CAN find it. In fact last year my local Meijer had it on the center aisle display with other baking goodies. Oh happy day! I made sure I bought at least a couple boxes because who knows when I would be able to find it again.

Sometimes I can find the boxes (or sometimes cans) of almond paste in my local “Dutch” store that imports many things from the Netherlands (because there’s still a lot of us Dutch folks here in Grand Rapids, Michigan!).  I can also sometimes find this ingredient with other “International” items in larger stores. You can also find almond paste on Amazon (for a price of course), and if it gets to the point when I can’t find it, I have this article pinned on Pinterest with instructions on how to make my own almond paste (which I might just try for fun anyway!)  If you’ve never worked with almond paste, it comes in a dense, soft lump of goodness that mixes in nicely to your baked goods.

Cooking with almond paste and almond flavorings is part of the Dutch tradition I’m descended from.   I used to make these glazed almond bars every Christmas for one of my employers, and one year he asked, “Will you be making those almond bars again?  You Dutch girls sure know how to bake with almond!!”

Well, thank you. I’ll take that as a compliment. Here’s how to do it: 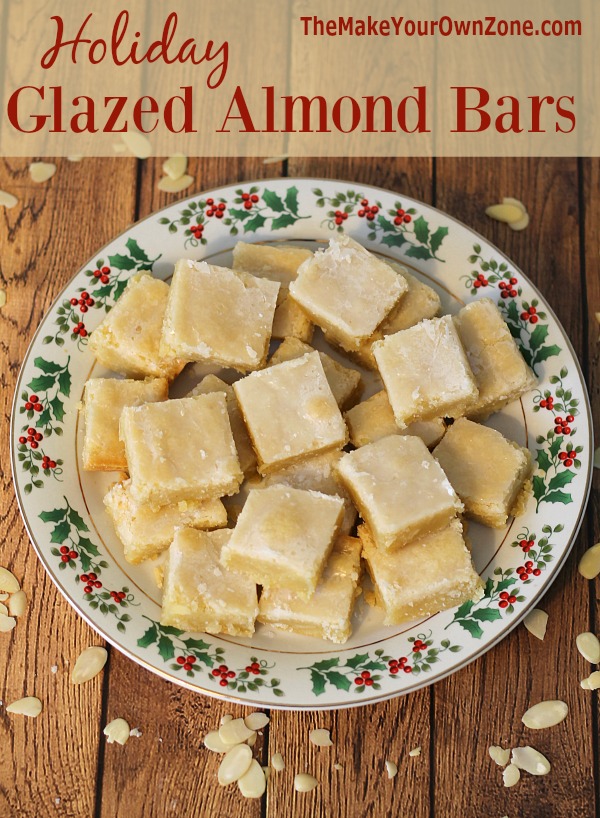 These rich and tasty bars are a special treat I love to make around the holidays. They make a lovely addition to a plate of treats to give during the Christmas season too.
Course: Dessert
Cuisine: American
Keyword: Christmas
Author: Beverly

Almond “Brownie” Bars, Another yummy almond flavored treat that simply uses almond extract with no need to go in search of almond paste.