I was browsing through a cookbook from the library with recipes for more nutritious eating using lots of vegetables and came across this admonishment I’ve seen in several other healthy eating cookbooks:  “We need to eat like our grandmothers and great-grandmothers did! We need to eat fresh fruit and vegetables like they did and live off the land!”

Now this strikes me as not quite right.  What generation of grandmothers are we talking about?

Many of the 30-something aged writers and bloggers who are romanticizing their grandmothers seem to forget that their grandmothers were raising families in the 1960’s and 1970’s.  I’m here to testify that we had plenty of cake mixes, kool-aid packets, boxes of macaroni and cheese, and Lucky Charms cereal back in that lovely era. 🙂 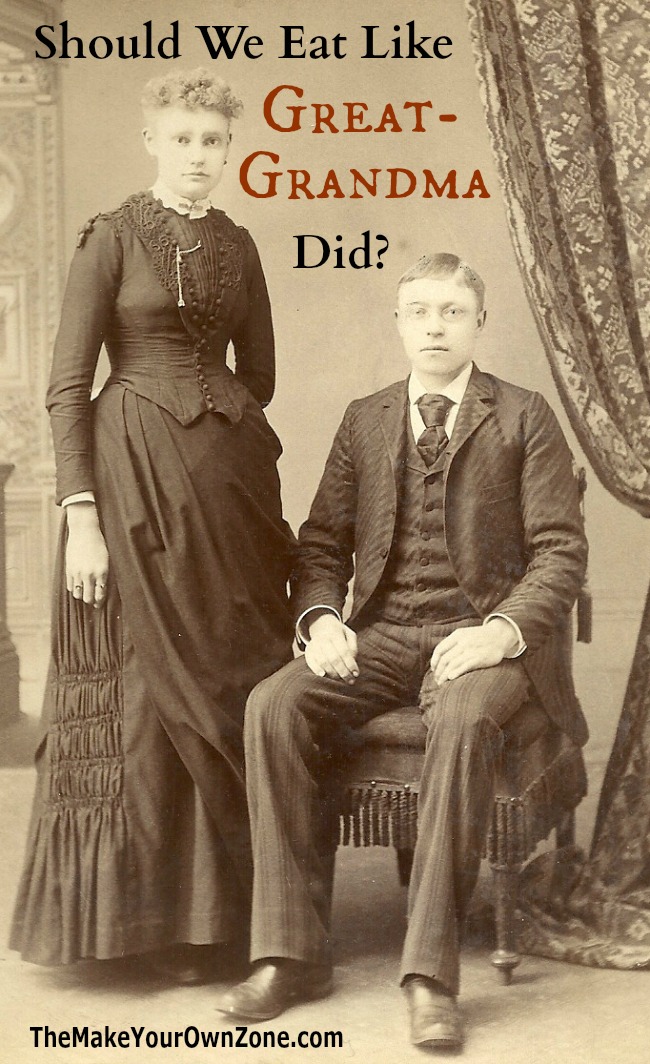 The picture above is one of my great-grandmothers on her wedding day and the year is approximately 1893.  I think this might be the ancestor responsible for why I can never get sleeves to fit my long arms. 🙂  And why did the guy get to sit down while the woman had to stand? One theory I’ve heard is so that the woman’s dress could be fully seen.  Yes, that beautiful black wedding dress.

Anyway, back to the discussion of food . . . 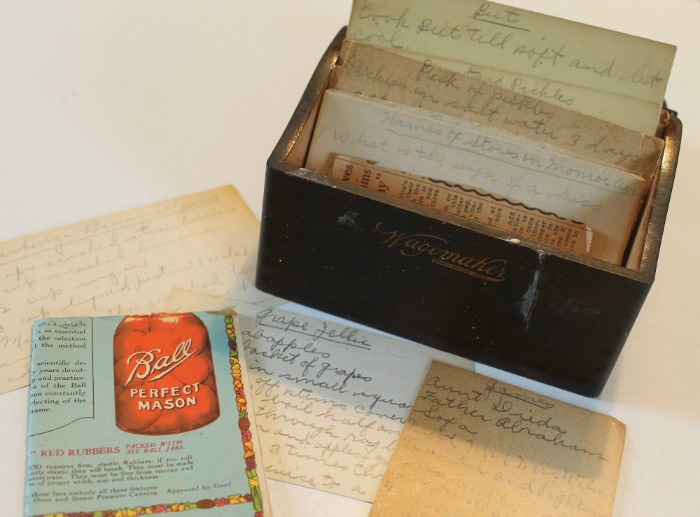 I recently inherited some old cookbooks and recipes boxes after my mother passed away, including my grandmother’s recipe box.  I looked through most of them, and not much there looked appetizing to be truthful.  For the sake of writing this post, I looked back at one of the more interesting recipe books I kept that was published in 1936 and was a collection of recipes from the Dutch women who settled in the Holland, Michigan area.  I also looked back at an antique homemaking manual I have that was published in 1902.  I think both of these are probably a pretty good representations of how my grandmothers and great-grandmothers were cooking.  I made a point of being sure to check the vegetable and salad sections of these cookbooks.  Here’s a few things that stand out:

Many of the recipes for vegetables have you covering them in water and boiling for a long period. When it’s done you add lots of butter and salt and pepper.

2 – Frying in bacon grease is an option too

If you’re not going to boil your vegetables, the next best cooking method offered up seems to be to get some bacon grease, butter, or lard, and fry it up and once again finish with salt and pepper.

White sauces were a common recommendation for finishing up your vegetables, as well as vinegar, which at least seems a little closer to the vinaigrettes we are familiar with now.  Another interesting vegetable topper that came up again and again was hard boiled eggs.  Lettuce leaves were usually only mentioned as a garnish.

Almost every vegetable recipe ended with adding some salt and pepper.  Grandma and great-grandma did not appear to have any interesting spices.  At best I could find a few references to nutmeg or cinnamon.

So yes, it appears grandma and great-grandma were eating their vegetables albeit in a somewhat bland, mushy, and saucy format.

Living Off The Land

Whenever I read the romanticized call to live like grandma it often is founded in the desire to “live off the land” like our ancestors did. True, most of our forebears did grow their own vegetables and I was pleasantly surprised at the variety I found in the old cookbooks including spinach, kale, brussel sprouts, beans, cabbage, peas, beets, and corn.

But I think it’s often forgotten that there was also a very big emphasis on meat and the butter, milk, and lard rendered from animals played a large part in how they prepared their vegetables.

Living off the land was also a very seasonal thing for the grandmas and great-grandmas who lived a rural farming lifestyle.  Refrigerators were not common in households until the 1940’s, although my ancestors may have used an icebox.  You used what you could at the time, perhaps using up excess fruit by baking lots of pies.  The rest was either preserved in a root cellar or canned. 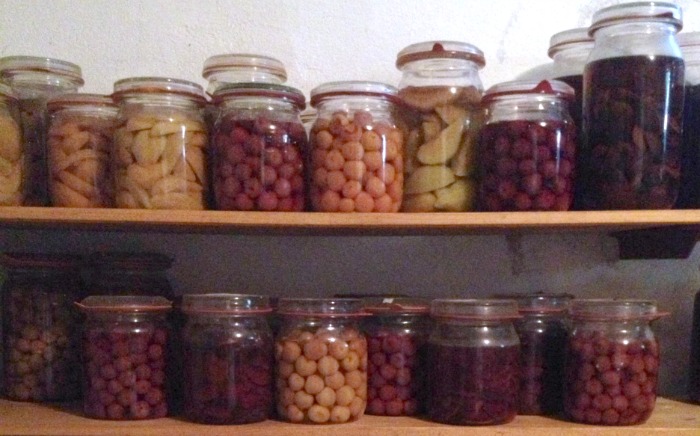 Canning fruit was done by cutting up the fruit and covering it with a sugary syrup (the way we still do it today!) I would venture a guess that my grandma and great-grandma ate more of their fruit from canning jars than fresh off the tree, bush, or vine.

Canning vegetables happened too and it appears that most often happened using vinegar or a salty pickling-brine type of format.  Again, because the entire harvest can’t be eaten fresh when it’s ripe, more of the harvest was eaten after the fact in it’s canned or pickled versions.

So when somebody tells me to eat like my great-grandma, I honestly don’t conjure up pictures of all kinds of fresh vegetables or tossed salads on the table all the time.  Instead I picture those few weeks in the summer (for instance when the green beans were ready to be picked) and everyone got to enjoy tasty fresh beans at the evening meal for a few weeks.  Then it was a long hot day in the kitchen canning the rest of the beans.  And then for many months after that, beans were vinegary, mushy things from the canning jar.

Not so appealing in my opinion.

We are certainly blessed, and maybe spoiled too, to have such a wide variety of fruits and vegetables available to us anytime we walk into the produce section of our modern-day grocery stores.  I am sometimes amazed that I can go into the produce section in the middle of January and find raspberries. Yes, raspberries during the snowstorms of winter!

Can you imagine our great-grandmother’s amazement at such a thing?

And things like oranges, lemons, and limes were exotic to them.  We expect them (yes expect them!) almost all year round now when we grocery shop. Again, such a blessing. 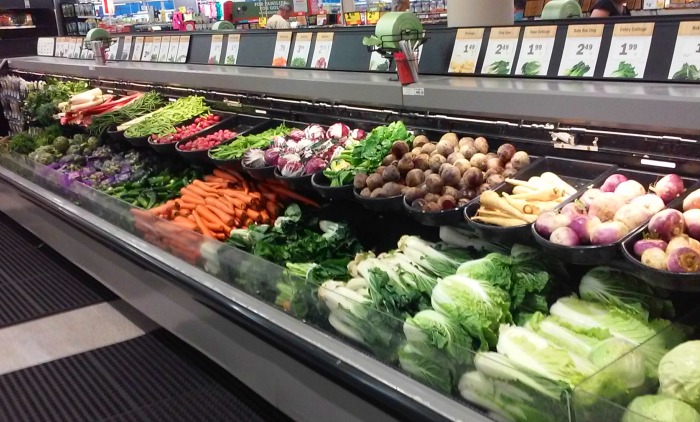 We can also usually find green peppers, romaine, tomatoes, or carrots during any month of the year. A fresh tossed green salad is a common thing for us whether it’s a sweltering summer day or a blizzard outside.  Sometimes I feel like it’s nothing short of a modern miracle and something we should certainly not take for granted.

So if we’re going to eat like grandma and great-grandma, let me share a few sample recipes I found. First, here are three from the Hollandsche Kookerij Boek (my Dutch cookbook from the 1936):

KALE (BOERENKOOL):  Wash well, cook with either metworst or a piece of lean pork about 2 hours and then add potatoes. When cooked down, take out meat and mash.  Add salt and pepper.

CUT BEANS (SNIJBOONEN): Wash long green beans well. Cut in thin slices diagonally. Place in an earthen jar in layers with two tablespoons salt sprinkled over each layer. When brine comes over beans they can be put in fruit jars. The beans should then be put in cold water for a few hours and drained. This may have to be repeated if the beans are exceptionally salty.  They may then be cooked. 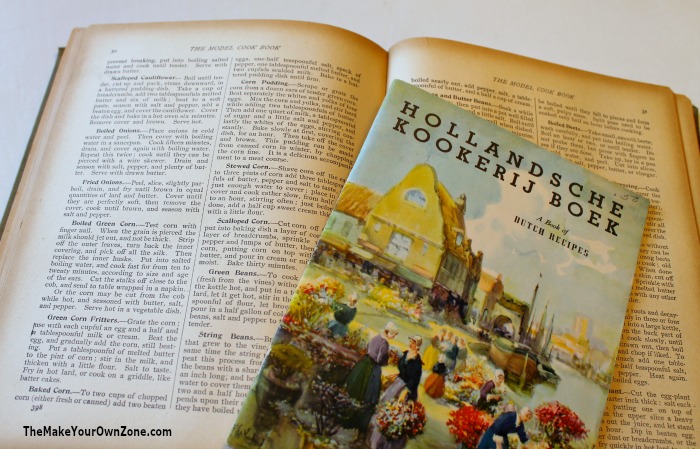 And from my homemaking manual from 1902, here is an excerpt from the section titled “Vegetables and their Preparation”:

“In the cooking of vegetables it should be borne in mind that all woody tissues, whether in the roots or stalks, the husks or skins, are nearly devoid of nutriment and quite indigestible; they should, therefore, be removed.  Vegetables should generally be boiled, this being continued long enough to disintegrate the tissues and allow the starch granules to break up.  The saline and saccharine constituents being extracted by the water, vegetables lose some of their main elements, especially if the water be soft.  This renders it advisable to add a little salt to the water. The salt also acts to preserve the color of green vegetables. The garden vegetables of this country are numerous and varied in character, and may be served in many ways. Chief among them are potatoes and tomatoes, which rank amid the most constant constituents of meals.”

So yes, although the vegetables grown were “numerous and varied” a couple generations ago, it looks like potatoes and tomatoes were the two omnipresent vegetables at most meals.

In summary, when I hear young people wishing to “eat like grandma did”, I think what’s really being hoped for is to get away from overly processed food and to eat more natural food.  They know that great-grandma didn’t bust out the bag of potato chips when it was time to get dinner ready.  I think the modern day person also fondly looks at the old days as a time without strange chemicals, preservatives, pesticides, or other unknown ingredients.  The wish to “live off the land” carries the hope of having a more pure food source.

I too am in agreement that homemade is usually better and a move away from junk food or overly processed food is a good thing. But I think we also have to be careful of romanticizing a period in time when the living conditions were much harsher than they are now and the dietary choices were often more limited, more seasonal, and more dependent on the forces of nature for the ability to feed your family.  Yes, I’m pretty sure my grandma and great-grandma were eating their vegetables, but not in the way many young people think they were.  We have a much larger variety and freshness available to us now in this generation, we have so many spices and cooking appliances for making things tasty compared to 100 years ago, as well as the knowledge we have now on the benefits of eating raw vegetables too.

What do you think? Am I missing something?  Or perhaps you have a favorite old time recipe or memory to share? Feel free to leave me a comment – I love to hear your thoughts and stories! 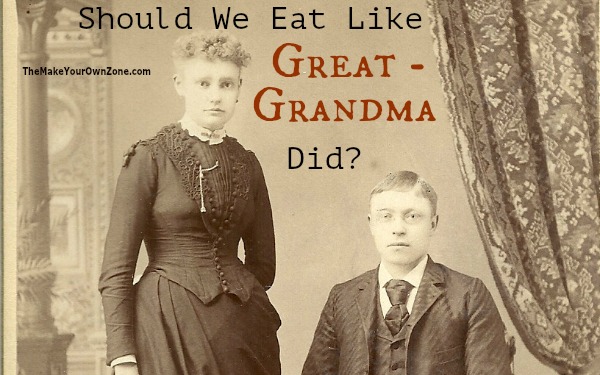