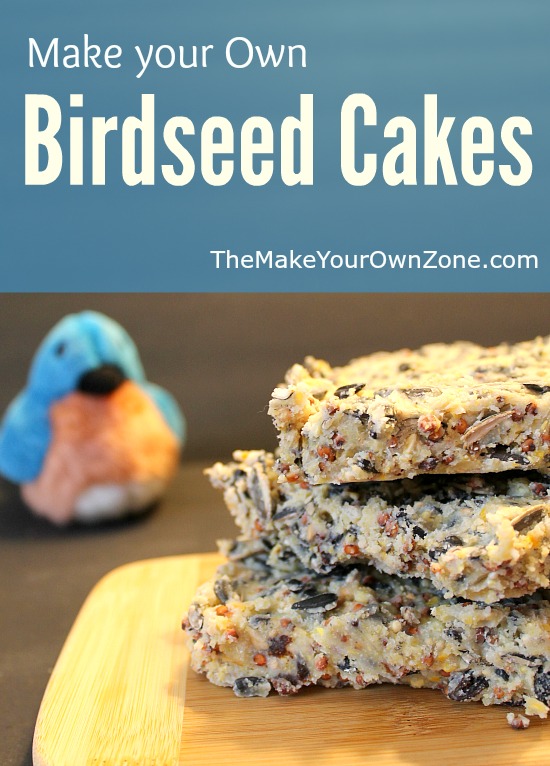 Sometimes when I’m coming up with my list of recipes to test and share on this blog I get a little selfish.  I think to myself, “What would I be making today even if there was no blog to write?”

And the answer is usually something like “Homemade Birdseed Cakes”  🙂

Now I know I’m probably not the only one in the world who likes to feed the birds, but I do admit to being kind of a bird nerd.  I have a couple different bird reference books, some little binoculars, and have been known to tell others with great excitement if four different birds besides sparrows were at the feeder at the same time (blue jay, cardinal, junco, and woodpecker!)

So once again during these winter months I’m sharing my most recent recipe for homemade birdseed cakes.  The birdseed cake recipe I used a few winters ago was pretty good, but was heavy on the peanut butter (hello squirrels!) and the cornmeal and flour.  So this year I’m trying out a recipe with no peanut butter and that uses a bit more lard instead of cornmeal and flour too.

I’ve been reluctant to label these DIY birdseed cakes as “suet cakes” which is the name most often seen on birdseed cakes in the stores.  Suet, however is made from beef fat and is much harder to locate for purchase where I live.  My best efforts at locating suet to order online came up with a company in England.  Apparently suet is the fat of choice for some traditional English recipes. 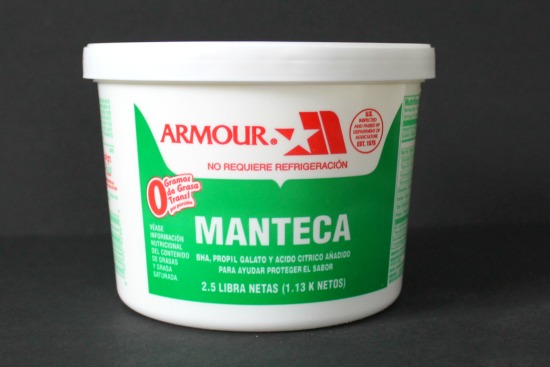 So instead of true suet, I have always used lard.  Lard is rendered from pig fat so it is still an animal fat rather than a vegetable fat (like Crisco).  Lard is usually easier to purchase at my local grocery store too.  I wrote an entire blog post about looking for lard in the grocery store a while back, with the advice to look in a Hispanic section of a store where it is often sold and labeled as “Manteca” – BUT – on the other side of the tub it is labeled as “Lard”. 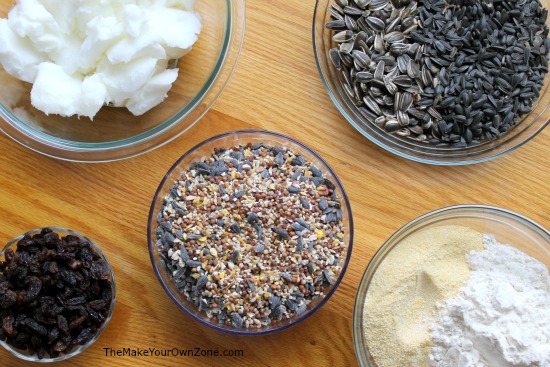 In a large bowl combine the birdseed mix, the sunflower seeds, the raisins, and the cornmeal and/or flour.  Stir until everything is well mixed together.

Place the lard in a microwave safe bowl.  Heat in the microwave until melted.  This took 2 minutes and 30 seconds for me.  There were just a few chunks still not melted, but I just stirred them around and they quickly dissolved.

Line a 9×13 pan with parchment paper.  Pour the mixture into the lined pan and spread it around evenly, making sure to get it spread out well to the edges too.  (See the notes below for why I put a couple holes in there). 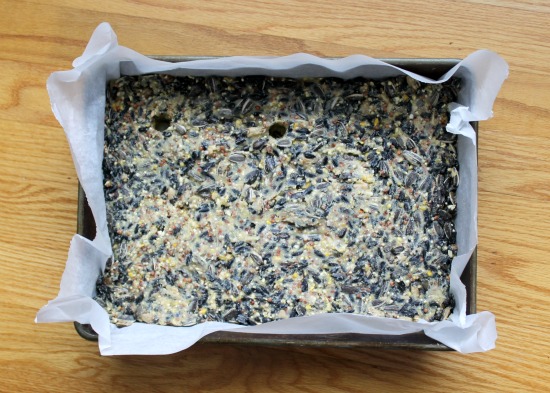 Put the pan in the refrigerator for several hours to cool and harden.

Tell Hubby when he asks that sorry, those are not chocolate chip cookie bars cooling there in the fridge, those are birdseed cakes. 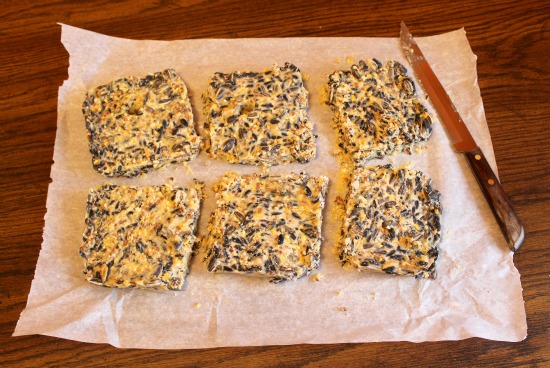 After several hours the birdseed cakes should be hard enough to cut.  Lift the parchment paper out of the pan and cut the block into 6 cakes that should be the perfect size to fit in most birdseed cake “cages” on bird feeders. 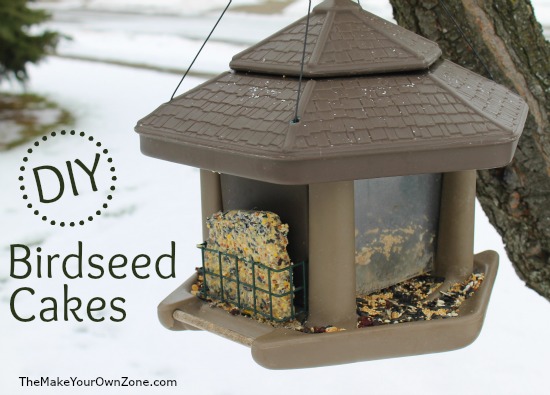 There will be some crumbling when you cut the block into your 6 smaller squares.  I save those crumbles too and scatter them around under my bird feeder because I’m just thrifty that way and figure some little critter down there will enjoy them.

~~  Although I haven’t tried it, it might also be possible to make this recipe with just 4 cups of basic birdseed mix.  However birds are usually fond of the black oil sunflower seeds so they’re a nice addition to the recipe.

~~ The 3 cups of lard is equal to about 1-1/2 pounds.  Lard is usually sold in containers labeled by weight, so make sure you get a container of at least 1.5 Lb size.  The containers I usually find in the store are 2.5 Lb size.

~~ For a couple of the blocks, I made “holes” with the end of my wooden spoon before the mixture hardened.  I just guessed where I thought the middle of a couple blocks would be.  I’m using these blocks on my Birdola Stacker bird feeder

.  Sometimes I’m ambitious and make these round birdseed cakes to fit on that feeder, but these cakes work on there too (they just don’t look too fancy).