Today’s subject is somewhat of a follow up to my last post about my Updated Chocolate Pudding Dessert.  Once again when I had to update an old recipe, I was reminded that having the ability to adapt and reinvent a recipe is a very handy skill for the homemade lifestyle.   Why? Because it helps keep you resourceful by making what you need – in any size that you may need too.  I’ve found this skill of re-sizing recipes and knowing how to adjust when needed to be quite empowering and useful and so I thought maybe I should be sharing my method.

So yeah, I’ve thought about writing on this topic of recipe adjustment before but worried that as you read along, your eyes might glaze over (math, ugh! boring!)  But today I’ve decided to forge ahead anyway and share my method because it’s helped me a lot and I think it could help you too.

And chances are you might be doing this already.  What it boils down to is being able to think of a recipe in the concept of “parts”. 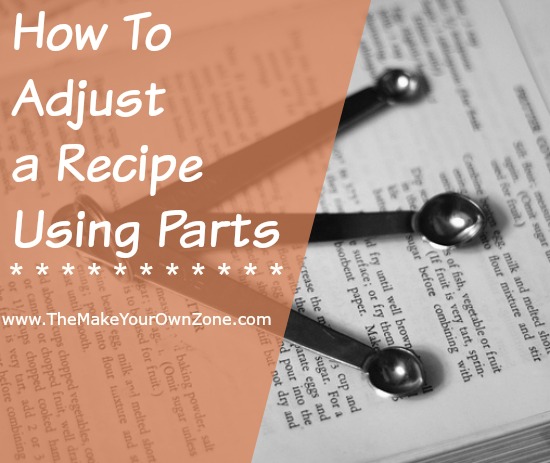 When we look at a recipe, we’re looking at instructions for WHAT goes into the recipe (the ingredients) and HOW MUCH to put in our recipe (the measurements).  The measurements in a recipe can be different units – teaspoons, tablespoons, cups, etc. 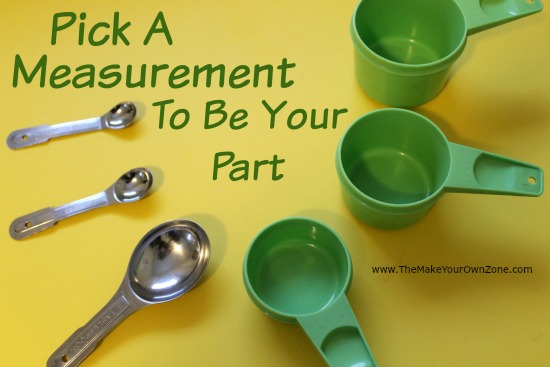 When I adjust a recipe using parts, I often think of it as “this is the size scoop I will be using”.  Let’s look at an example.

NOW, if we want to make a bigger batch of our Make-Believe Spice Blend, all we have to do is change our unit of measurement.  Pick a new size scoop!  If we use our tablespoon, we’ll have a batch that’s about triple the size of the original recipe.  If we want just an itty bitty batch, we can use our 1/4 teaspoon.  As long we keep our ratios in this example to 1 Part – 2 Parts – 3 Parts, we’ll still have the same recipe, just in different sized batches.

That Was Easy – Let’s Try Something Harder

OK, that was a simple example to get us started.  Stick with me while we look at a recipe with a bit more going on.  This next example is the exact process I went through in updating my Chocolate Pudding Dessert.

For this situation, I wanted to adapt the chocolate cake recipe I used in my Topsy Turvy Cupcakes.  I didn’t want to cut the recipe in half, I just wanted it slightly smaller.  This is a perfect example of how using the concept of parts can come in super handy  – AND – how you have to stay flexible and creative as you move along.  Of course this is a bit easier if you’re comfortable in the kitchen and have been baking and cooking for a few years already. Sometimes when adapting a recipe you just have to rely on your gut instincts and best guess for something that doesn’t precisely calculate out.  However it certainly is a concept that anyone can master so don’t be afraid to give it a try.

The first step is to look at the current recipe and decide what unit of measurement will be your “part” for the sake of your calculations  In this example, I decided to use a 1/2 cup as my part in the original recipe.  For the updated adaption to make it slightly smaller, I decided to change the part to 1/3 cup.

Rather than bore you with another paragraph of wordiness (math, ugh! boring!) here’s a graphic of how that process played out: 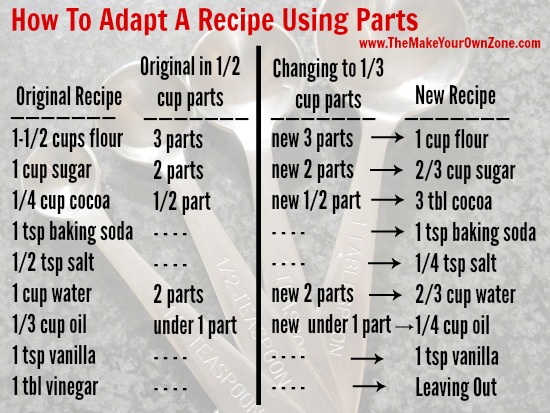 NOW, as mentioned before, things don’t always calculate out perfectly.  Sometimes you have to roll with it and enjoy the process.  And honestly, I find that almost a more enjoyable way to cook than always having it laid out perfectly before me!  A few “less than perfect” measurements from the above example are . . .

The teaspoons  – Because the teaspoons would be such a small ratio to the parts I was using (1/2 cup and 1/3 cup) I decided to just leave the teaspoon of baking soda and teaspoon of vanilla as they were, and just cut down on the salt a little bit.  I let my creative instincts have their way and took an educated guess on these.

And the vinegar?  For some reason there was vinegar in my original recipe.  Umm, I’m a gonna leave it out this time around.

And if you really don’t want to do too much math, just go with the “scoop” approach.  For instance in this new recipe, when I translated the 3 parts of flour to become 1 cup, I could have also just used my 1/3 sized measuring cup as a scoop and filled it with flour three times!  That’s how the concept of parts truly works.  Once you know how many parts are needed for each ingredient in the original recipe, just pick your new part size (or scoop) and fill it as many times as there are parts needed for that ingredient. This is the super quick way to adapt if you don’t have the time, or don’t see the need to write down your new calculations.

Another Way I Use Parts To Help Create Recipes

And finally, here’s another way that the concept of Parts has been helpful for me.  The internet is a great place to find new recipes, but sometimes there can almost be too many recipes!  When I go online in search of something rather specific I want to learn to make, I end up bouncing all around the web finding what’s sort of the same recipe in a lot of different places, but all of them have just a few little variations and things that are different.  Sometimes it leaves me wishing there was just one consistent recipe everywhere I looked.

When this happens, my usual strategy is to get out a piece of paper and start writing down some of the ingredient lists I’ve found side-by-side so I can start comparing.  I usually write down somewhere between six to ten recipes that look the most appealing.

Once I have that many versions written down for a recipe and start comparing them, I can then start seeing some common threads – AND – most of those common threads are for the ratios, or parts, that are being put into use in a recipe.  Once I see kind of a consistent pattern for the parts being used in all the different versions, then it’s like a light has dawned and I know what I want to do to create my own customized final version of the recipe. 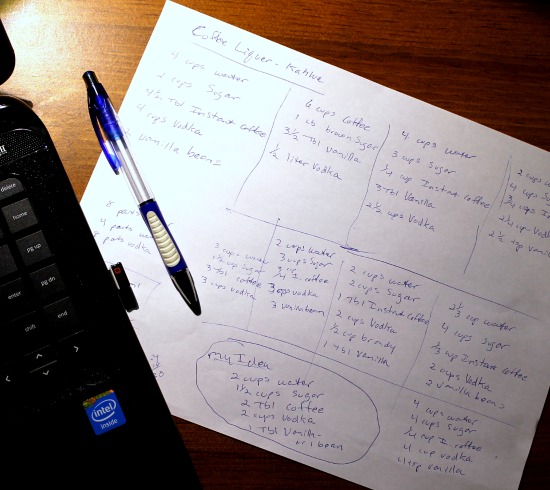 So that you can see what I mean, here’s a photo of my scribblings using this method.  In this example, I was working on making a homemade version of Kahlua.  After writing down a bunch of recipes, I could see the main thing they all had in common (usually equal parts of water and vodka) and the main variable was how much sugar each of the different recipes used.  From there, I could see my way clear for “My Idea”.

Coming Up For The Holidays!

So now I’ve given you a little sneak peek up there with my homemade Kahlua for what’s ahead for holiday recipes this year on The Make Your Own Zone.  The theme this year will be “Christmas Spirits” and each week I’ll be sharing a homemade liqueur you can use for gift giving or for sipping at holiday gatherings.  In addition to the homemade liqueurs, I’ll be sharing ideas for how to use each of them in a tasty cocktail too.