I’ve always been intimidated by cooking a whole chicken and I don’t really know why.  I always had my excuses for not giving it a try which sounded something like this . . .

~  The boneless, skinless chicken breasts are so convenient

Yes, I had my excuses for wimping out and just buying the ready-made rotisserie chickens, but there was always one fact I couldn’t ignore.  An uncooked whole chicken is one of the cheapest ways to buy chicken, often costing less than $1.00 per pound.  The ready-made rotisseries chickens aren’t too pricey, but we do find they can be quite small and we don’t always feel like we’re getting that much meat for the money.

The frugal side of me said it was time to stop making excuses and start cooking up some whole chickens and I started to watch for some good recipes to try.

My first attempt came after I spotted a recipe in my local newspaper saying you could make the perfect roast chicken in less than an hour.  WooHoo!  That sounded awesome.

It used a method of putting a skillet in the oven while you heated the oven to a really hot temperature.  Then you put the chicken into the hot skillet and let it cook at the hot temperature for a little bit, and then you turned down the temperature and let it go for a while longer.

So we gave it a try . . . . and it did not go so well.  At the hot temperature the chicken sizzled and spattered.  When we took it out after sitting at the lower temperature, it looked done on the outside, but when we cut into it we found out it was not done on the inside.  For my efforts I ended up with a dirty oven, an undercooked chicken, and disappointed hungry menfolk looking for their dinner.

Maybe this is why I haven’t been cooking whole chickens.

For the second attempt I used a method of putting wadded up balls of tin foil under your chicken in a cockpot. What’s the purpose of the tin foil?  As far as I can tell it keeps the chicken above the greasy liquid that accumulates as the chicken cooks, and will still conduct heat in the process.

It was simple and easy and turned out great!

Here’s the details of that method:

MAKE YOUR OWN ROTISSERIE CHICKEN

1.  Rinse the chicken inside and out with water.  Remove any of those mysterious things inside the cavity of the chicken (gizzards??)

2.  Sprinkle the outside of the chicken with seasonings of your choice.  I like to use my homemade chicken seasoning blend, but you can also use Lawry’s salt, just some salt and pepper, or any other rubs or seasonings that you like.

3.  Place about six balls of tin foil in the bottom of the crockpot.  The balls of foil can be crumpled loosely.

4.   Put the chicken on top of the balls of tin foil, breast side up (the little tips of the wings should be pointing up).  There is no need to add any water.

** Note – I started out using my 4 Quart Crockpot

with about four balls of tin foil.  When the chicken was added, it just barely fit!  I switched to my larger 6 Quart Crockpot

and added a few more balls of foil and it worked much better. **

After the 8 hours of slow cooking, the meat was falling off the bone but was still very moist.  (You can also baste the chicken from time to time if you’re home to do it.)

**Update:  I’ve found that letting the chicken set for about another hour in the crockpot on the “keep warm” setting seems to lock in a little extra juiciness! 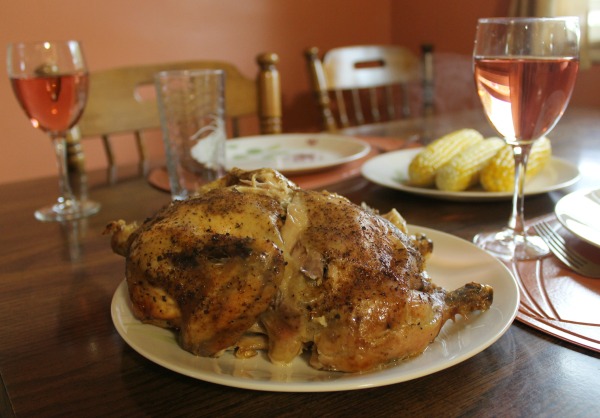 So I think I have a new go-to method for cooking up a whole chicken.  No more excuses!

How about you?  If you have a tried and true method for cooking a whole chicken, please share with a comment. I would love to learn about it!