Is anybody else a fan of chai tea?

Is anybody else NOT a fan of the high prices you pay for chai tea at places like Starbucks or Panera?

So what can frugal folks like us do if we want to make our own chai tea and save a few bucks?  I played with some different options and here’s what I found out.

One of the obvious things to try first is to just buy the chai flavored tea bags.  Seems like that would solve the problem right there, doesn’t it?  In my opinion though, the chai tea bags turned out to be kind of wimpy flavored, and of course were still missing the milk and sugar component that’s traditional with a good chai tea.  Adding milk and sugar seemed to dilute the little bit of chai flavor even more.

Going in search of scratch recipes brought me to the realization that a really authentic chai tea starts with whole ingredients like cardamom pods and anise stars.  I had no idea what store in my part of the world carried those items, plus it sounded expensive to buy those ingredients, so I crossed that strategy off my list.

What next?  I had high hopes for a homemade powdered chai tea mix recipe that I’ve come across several times and mixed up a trial version making a few of my own tweaks.  The mix had good flavor, BUT, the ground spices in the mix immediately floated to the top of a cup of tea and just kept swirling around.  I didn’t like that very much.

I then tried infusing half & half with chai tea bags.  Blech.  I tried making my own chai tea bags with ground spices.  Blech.  (but at least I learned how to make my own tea bags!)

So . . . was there any recipe that worked?  My best solution so far has been a recipe for a homemade chai tea creamer that uses a base of sweetened condensed milk  with ground spices stirred in.  This gives you the sweetness, the milkiness, and the spice flavors that you want to enjoy in a good cup of chai tea.

This creamer mix still has a little bit of the ground spice “floaties” on the top of a cup of tea, but not nearly as much as the powdered mixture did.  So it’s something I can live with to get a homemade cup of yummy chai goodness! 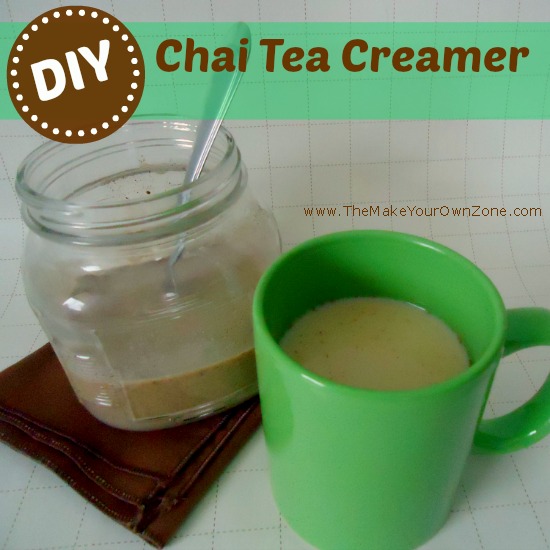 Pour the sweetened condensed milk into a wide mouth jar.  Add the ground spices and stir to mix everything together well.  Put the lid on the jar (or cover some other way) and put in the refrigerator.  Let the mixture sit for 24 hours or so to let the spices mingle.

To use, put a spoonful of the chai tea creamer into a cup of tea and stir.  This can be used to flavor a cup of coffee too!

This creamer will keep in the refrigerator for several weeks.  Stir the mixture again each time before using.

~~ I learned quickly too that a wide mouth jar is a better container for this mixture than some kind of pitcher or other container for pouring.  It’s a thick creamer and it works the best to dip a spoon into the jar, and then put the spoonful of chai creamer into your tea rather than to try to pour the creamer directly into your tea. 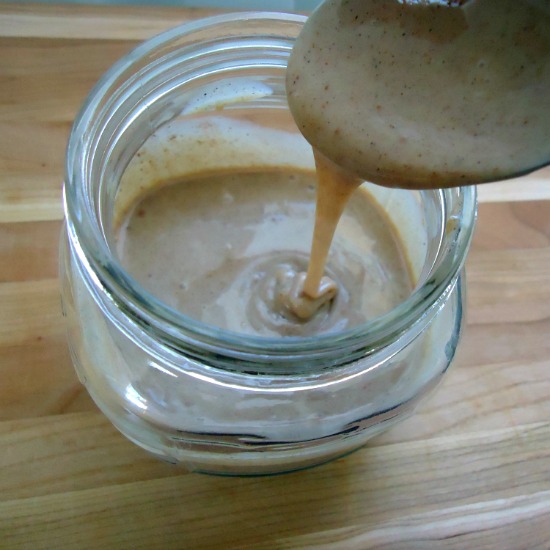 ~~ We said this was a frugal mixture, right?  Then what is cardamom doing on the ingredient list up there ?!  Yikes!  If you’ve ever gone to the store to buy ground cardamom, you probably picked the little spice bottle off the shelf, saw it was about $10.00, and put it back on the shelf like it was a hot potato or something and ran away.  {or maybe just cheapskates like me do that}.  I waited until there was a good sale on spices and then combined it with a coupon, in order to buy a bottle of ground cardamom at a much lower price.

~~ Feel free to play with the combination of spices in this mixture too.  If you don’t want to buy cardamom for instance, you can try increasing the nutmeg or cloves a little bit instead and leave the cardamom out (although cardamom is one of the signature flavors in chai tea).