When it comes to homemade natural cleaning, one of the most versatile items at your disposal is distilled white vinegar. It’s cheap, it’s readily available in the stores, and it can solve a multitude of cleaning problems. And if you’re trying to solve the problem of how to clean a dirty shower head and remove mineral deposits like limescale or calcium, vinegar can come to the rescue for that too!

I first learned this handy trick several years ago when I was looking for an easy DIY way to clean the hard water stains off my shower head. All it took was a good soaking in vinegar for a few hours and it looked great again. The first few times I did this I would put vinegar in a baggie and then wrap it around the shower head so it could soak for awhile. Below are the pictures from when I first wrote about this strategy.

How To Use Vinegar To Clean A Shower Head

So once again I found myself in the situation where the mineral deposits had built back up on my shower head and it was time to give it another good thorough cleaning. This time around, however, I have a new type of shower head that has the option to be handheld if needed. This made cleaning it with vinegar a little easier as it’s no longer a big deal for me to remove the shower head from it’s position up on the wall.

I was sure that vinegar could once again be the solution I needed to get my shower head nice and clean but this time I decided to use a slightly different method than the baggie strategy.

Instead of using the baggie method, I decided to simply soak some paper towels with vinegar and just lay them on the shower head instead. (This paper towel method could still easily be used even if your shower head is not the handheld type.) I then set the shower head down on my shower shelf and let it soak this way for an hour.

After things had soaked for an hour I checked it and there was only one small area that needed a little more soaking time where I had not pressed the paper towel quite firmly enough against the shower head surface. So I just smoothed it over that area a little better and let it soak for another hour.

And I was rewarded with a shiny clean shower head that looks and feels just like new again! I gave the rest of the shower head a final quick cleaning with one of my cheapskate magic erasers, and everything is once again looking great.

If you’re looking for a simple DIY way to remove frustrating hard water stains and mineral deposits on your dirty shower head too, vinegar can be the perfect cheap and easy solution. The thing to remember is . . . it’s less about the way you get the vinegar onto the shower head, and it’s more about having the patience to let it sit for awhile and do its work.

So you can use a baggie, you can use paper towels, or you could even set the shower head in a bowl of vinegar I suppose, but then you need to let things sit and soak so the vinegar can dissolve the buildup. An hour of soaking will usually do the trick.

If you have any concern about using vinegar on the type of finish you have on your shower head, test this method on a small area first with just a small piece of vinegar-soaked paper toweling. 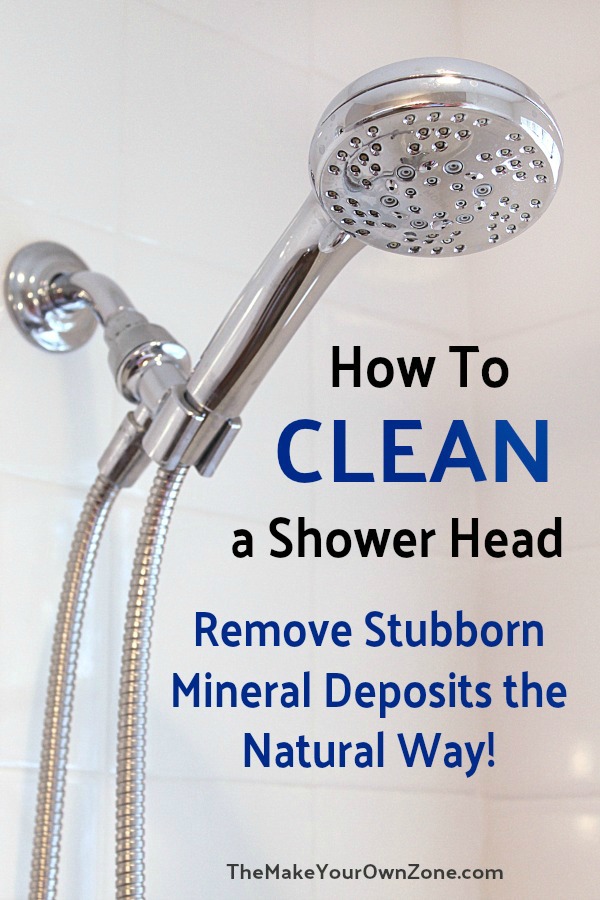 How To Clean A Shower Head With Vinegar

Give your shower head a natural cleaning with vinegar to remove limescale, calcium, and other build up of mineral deposits. It will look like new again when you're done!
Author: Beverly

You can also use this vinegar soaking method for cleaning a shower head by putting vinegar in a baggie and wrapping it around the shower head and letting things soak for an hour. If there is any concern about using this method on the type of finish you have on your shower head, test it in a small area first by using a small bit of vinegar-soaked paper toweling.