Several years ago I tried making my own vanilla extract for the first time. It was a simple method of simply letting vanilla beans soak in vodka for a few weeks. In fact I would say the only skill needed for that project was some patience and that’s not always something that I have a lot of!

So this most recent time around when I wanted to make my own vanilla extract I decided to try a method that I’ve been hearing about lately that doesn’t require as much patience – using the instant pot for homemade vanilla extract.

This time around I also decided to try using rum instead of vodka for the soaking alcohol. I prefer to make small size batches of homemade vanilla extract and that means leftover alcohol. And rum is a leftover I’m much more likely to drink in a cocktail (as opposed to vodka). But choosing the alcohol for these recipes is never easy for me! After looking at the rum options, I decided not to buy a spiced rum, because I wanted the vanilla beans to be the only flavor in the final mixture.

I also decided to try using a couple of my mini 4 oz mini mason jars for this project just because that seemed kind of fun for the small size batch I was making using the little 3 pack of vanilla beans I ordered. Once I had all my supplies gathered together I was ready to give it a try!

The first step for this homemade vanilla extract was to slice and cut the vanilla beans. I decided to use one and a half beans for each 1/2 cup of alcohol. I cut my beans into smaller pieces and then sliced them open vertically to expose the flavors inside the bean.

I placed my vanilla pieces inside the jars and added the 1/2 cup of alcohol to each jar. I put the lids on so that they were just barely tightened.

The next step was to put the trivet in the bottom of the instant pot and then add one cup of water. Then I set my little jars on the trivet, which was a bit of a balancing act because the jars were so small!

I put on the lid and set the Pressure Cooking time to 45 minutes on my 3 quart mini Instant Pot and when it was done, let the pressure release naturally. Then I carefully took my little jars out (they’re very hot) and put them on a hot pad to cool.

So was it worth it to hurry things along when making homemade vanilla extract by using the Instant Pot? Maybe not. Here are a couple of curious things that I noticed.

First, some of the alcohol must have evaporated away during the process. There was less fluid in the jars when I took them out of the Instant Pot. Now this may not even be noticeable if you are using larger pint or quart jars when doing this, but when you are using a little mini jar, you can indeed see the difference!

Second, the extract seemed a bit cloudier than when I had used the long soak method and I could see vanilla seed sediment on the bottom of the jars, which most likely was a result of this heating method. This isn’t necessarily a deal breaker, but a clear amber liquid when making your own extract is prettier, especially for gift giving.

So I think this quick method still has merit. If I try it again I think I’ll use bigger jars and maybe we’ll give the spiced rum a go the next time around too.

Or perhaps I’ll just have patience and do it the old fashioned way. 🙂

Here are the complete instructions if you’d like to give it a try. 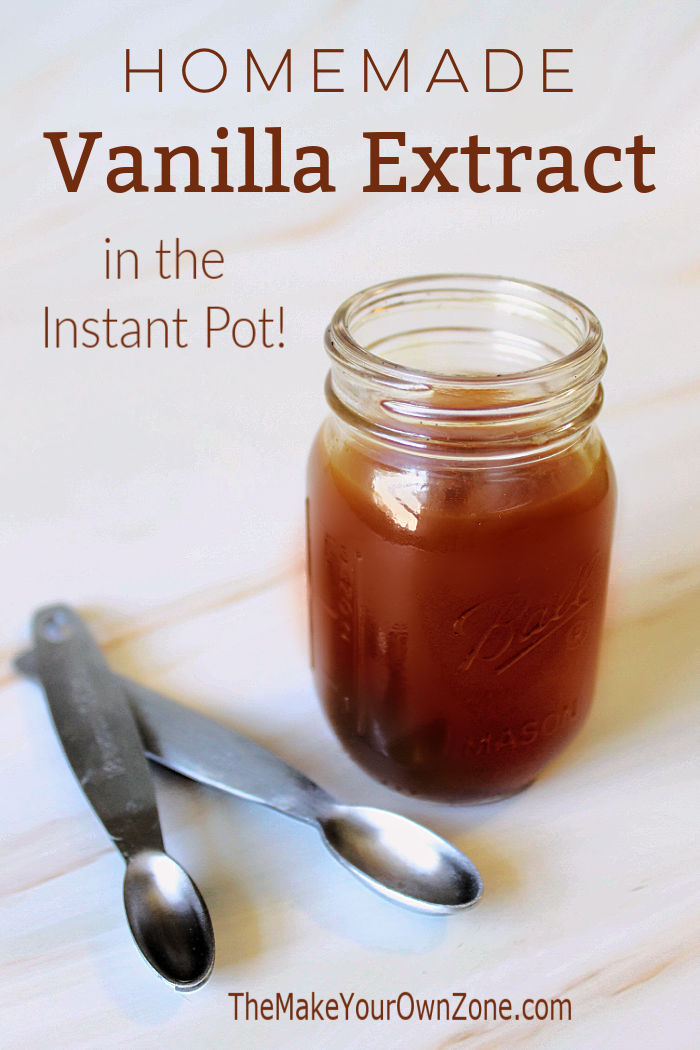 Make your own vanilla extract with this method that uses an Instant Pot for quicker results. You can make this in any size batch you would like, using a ratio of one and a half vanilla beans for each 1/2 cup of alcohol.
Course: DIY Baking Hack
Keyword: Homemade Extract, Instant Pot
Author: Beverly

You can use the flat lids and rings on top of your mason jars for this process too. Just be sure that the ring is just barely tightened into place so that the lids do not seal down during the time in the Instant Pot.