My adventures in the kitchen last week once again highlighted why it can be frustrating to rely too much on recipes that use a particular size or brand of a pre-packaged convenience item at the grocery store.  As the years go by, these products may be discontinued or reintroduced in different flavor varieties, sizes and prices change, store brands of the same thing may become available, and all of this can leave you with a recipe that doesn’t translate to the real world like it used to.

I touched on this subject once before with my recipe for a homemade hot chocolate mix that I’d been using for many years.  The sizes and brands that worked 30 years ago just didn’t make much sense anymore and after doing some thinking and number crunching, I created my updated homemade hot chocolate mix that worked much better. PLUS – it will last better into the future too because it doesn’t rely on a particular size or brand of product packaging.

And it was time to do the same thing with another one of my oldies but goodies – my favorite chocolate pudding dessert. 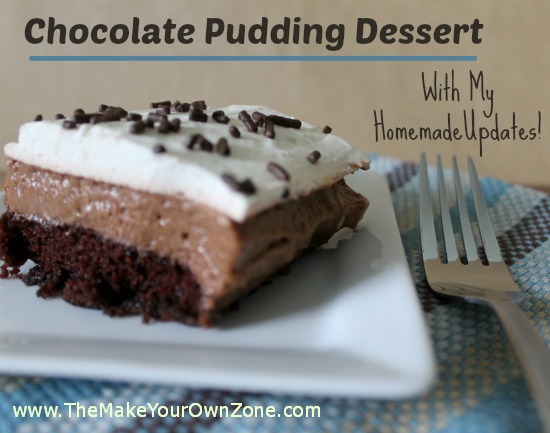 My chocolate pudding dessert recipe had always been a reliable standby for me for those “potluck” and “company’s coming” kind of occasions. I’d made it a whole bunch of times and everyone always gobbles it up when it’s served.  But now one ingredient was screwing things up.

The recipe called for a Jiffy one-layer chocolate cake mix.

Which I can find exactly NOWHERE anymore.  It’s not on any shelf at any grocery store in my area.

And here again I’m reminded of what at first glance seems like convenience may not really be convenient after all.  Sure, that little cake mix was handy for the first few years I made the recipe, but now?  Now it was the thing causing all the great inconvenience.  All the cake mixes now are for larger sizes that won’t work in this recipe.  So there I stood in my kitchen, surrounded by the flour and sugar and cocoa that would make a great chocolate cake, and yet feeling like I couldn’t make my favorite chocolate pudding dessert anymore because of this one unavailable little stinkin’ cake mix!

It was time for a few homemade updates.  And once those updates were made, I knew I would have the new convenience of being able to use what I had to help make what I need.

This dessert is made with three layers:  A bottom layer of chocolate cake, a middle layer of pudding and ice cream, and a top layer of whipped cream.  I decided I could re-invent the bottom layer and make my own cake without any pre-packaged mix, the middle layer I would still use the instant pudding mixes, and the top layer I would substitute my homemade stabilized whipped cream for the Cool Whip that I used to use.

Here’s how to do it.

Combine the flour, sugar, cocoa powder, baking powder, and salt in a medium sized mixing bowl.  Add the oil, water, and vanilla extract and stir until the ingredients are well mixed.  An electric mixer can also be used. 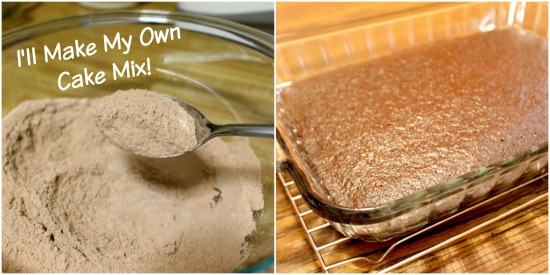 Pour the batter into a greased 9×13 pan and bake at 350 degrees for 15 to 20 minutes.  While cake is cooling, mix together the ingredients for the second layer as follows:

(for this layer I did not substitute any homemade updates.  Although I’ve tried a homemade pudding mix, it’s the cook-and-serve type that won’t work for this recipe)

I usually take the ice cream out of the freezer a little bit ahead of time so it’s a little softer.

Combine the pudding mixes and the milk in a mixing bowl.  Add the ice cream and keep slowly stirring until it is completely mixed in with the pudding.   Then spread the pudding/ice cream mixture over the cake layer in the pan.  I then put the pan in the refrigerator for about 15 minutes so it can firm up slightly before adding the next layer. 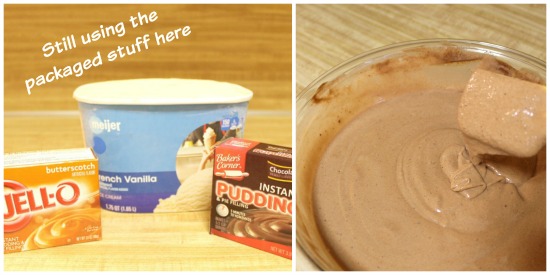 As a side note on the ice cream – the “one quart” measurement of this recipe used to be easier back in the day too because ice cream used to be sold in 2 quart containers and you could just use half.  Now, packages of ice cream have been down-sized and the brand I buy is sold in a 1.75 quart size.  I still just eyeball it and use just slightly more than half of the container.

(For this layer I used to just spread on Cool Whip.  This time however, I used my homemade stabilized whipped cream and it worked perfectly!  Rather than repeat that recipe here I will simply provide the link if you want to make that substitution)

A quick overview of homemade stabilized whipped cream is that you use an electric mixer to beat heavy whipping cream, add just a bit of sugar and vanilla, and then make a final small addition of dissolved unflavored gelatin to give the whipped cream a firmer consistency that holds up longer.

Oh and then there’s one final addition to the layers.  Chocolate sprinkles! 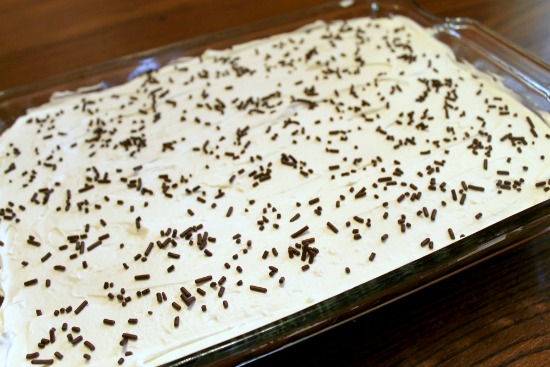 So company came this past weekend and I was once again able to make my favorite chocolate pudding dessert.  Yay!

I think I’m all set now for the next few years – as long as the manufacturers don’t discontinue instant pudding mix (and then I’ll just have to figure out how to Make My Own for that layer too!)