I’ve been seeing the colored canning jars more and more in the stores lately.  Most of the time I’ve seen the blue canning jars for sale, which I’m sure are intended to look like the old vintage jars from years ago.  Other times (like when I was in Joann Fabric not too long ago) I’ve seen them in other fun colors too like pink, yellow, and green. 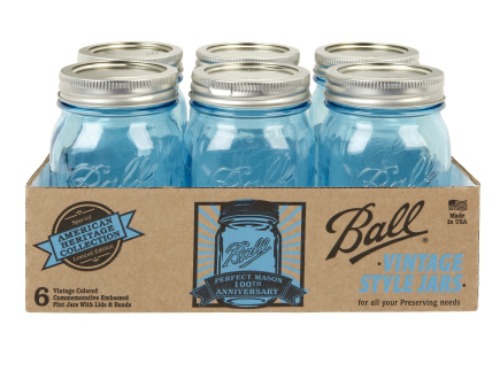 Yes, It was time to Make My Own! 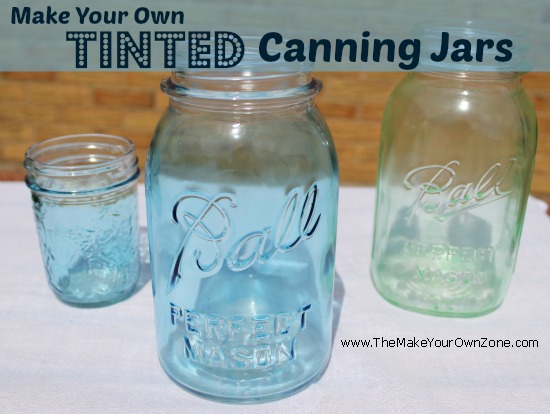 I tried two different methods to make my own colored canning jars.  The method that worked the best used a product called Glazing Medium.  The second method I tried was more of a Let’s-just-try-it-what-the-heck experiment with my homemade Mod Podge.  BUT – it actually worked quite well so I’ll include those instructions at the end too because it was a super frugal way to get a colored canning jar. 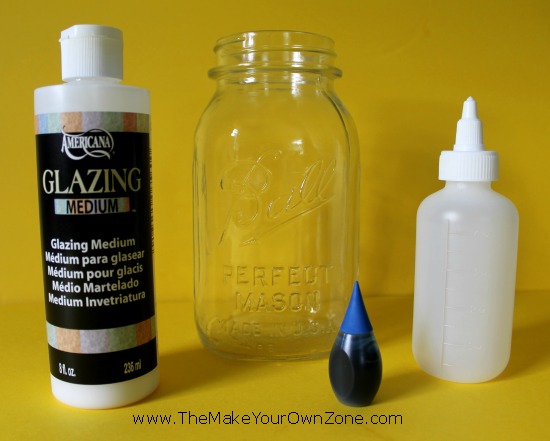 Here’s the details on the supplies that I used:

Glazing Medium – I was able to find the Glazing Medium at my local Michael’s Craft Store (it was the Americana brand in an 8 oz size).  At the time of this writing the price was $6.49 and with my 40% coupon had a final cost of $3.89.  It was sold on the aisle with the craft paints although I did have to do some hunting around before my eyes finally spotted it.  If you can’t find Glazing Medium at a store near you, there are some available on Amazon including the Folk Art Brand of Glazing Medium

Glass Jars – Last week I also wrote about my choice of canning jars for this project and how I discovered I had 80 year old canning jars!  (Read that post here:  My Canning Jar Discovery).  So before you tint any of the canning jars you have around the house, you might want to investigate how old they are before you forever change them.  The instructions below should give you enough mixture to tint a quart size jar.  This method should work on any type of repurposed or recycled glass jar too.

Liquid Food Coloring – This is just your basic liquid food coloring from the grocery store that I’m guessing many of you already have in the pantry somewhere.  I only used 3 drops of food coloring in the first mixture I made for this project but the finished project was kind of pale and not a bright enough color to suit me.  I tried again using 10 drops and found that to be a better amount.  Feel free to adjust the amount of food coloring if you want a shade that is slightly lighter or darker.  You could also mix colors to get a special shade (i.e. red and blue mixed to make purple).

Plastic Squeeze Bottle – I’ve seen other instructions floating around the internet for colored canning jars and lots of them have you coloring the INSIDE of the jar.  I decided I wanted to tint the OUTSIDE of the jar because I saw myself using these colored jars mainly as flower vases and so wanted them to be able to hold water and easily be washed on the inside without worry that the color would wash off too.  For this reason I used a small plastic squeeze bottle so I could squirt the colored glazing medium around the outside of the jar.  This was just a little bottle I already had on hand that I think was purchased in the travel sized product area of my local grocery store. 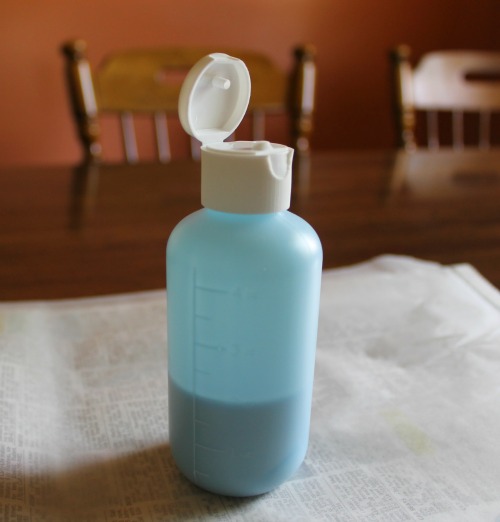 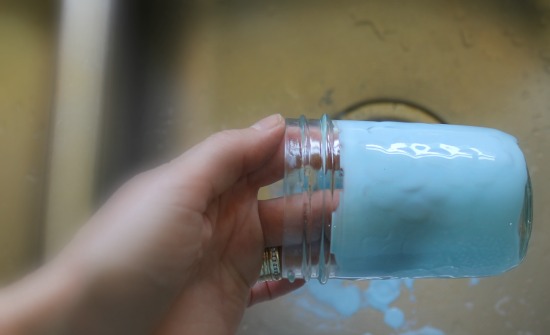 Set the jars upright on the waxed paper to dry.  (I put newspaper under my wax paper too).

The colored glazing medium will be opaque when you first put it on.  As the canning jar sits on the waxed paper to dry, the glazing medium will keep draining down and puddling around the bottom.  Move the jars around every so often, and wipe the excess from the bottom with paper toweling. 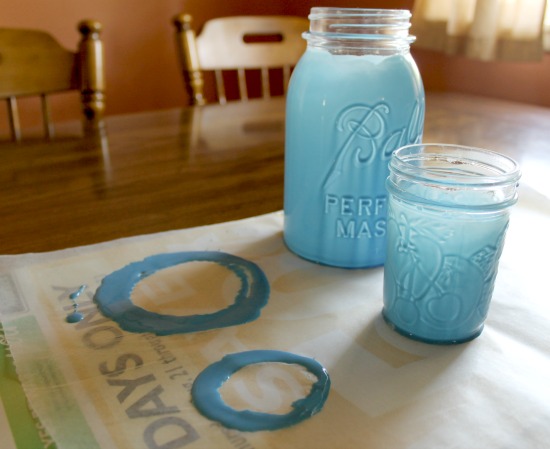 Needed supplies different from above:

As mentioned above I also tried tinting a canning jar using my homemade Mod Podge. This is the way to go if you want a really thrifty method because my homemade Mod Podge is a simple mixture of equal parts white glue and water. I used this method for the green jar in the picture up above.

The instructions for this method are the same as above.  I used 3 tablespoons of homemade Mod Podge with 10 drops of food coloring.  I also used the squeeze bottle method to apply the mixture.

HOWEVER . . . the homemade Mod Podge mixture is a thinner consistency than the glazing medium mixture and therefore will look runnier and might not have as complete coverage when you set it on the waxed paper to dry.  If that is the case, take a craft paint brush and spread it around a bit more as needed to get good coverage around the jar.

Also because the mixture is a bit runnier, a few more drops of food coloring could be helpful too (although I was satisfied with the color of mine).

This method would probably also work with store bought Mod Podge, but I haven’t personally tested it out.

So now that I have my tinted canning jars, I’m enjoying using them as a homey folksy type of flower vase.  Did I get just a little carried away with these HUGE sunflowers ?? 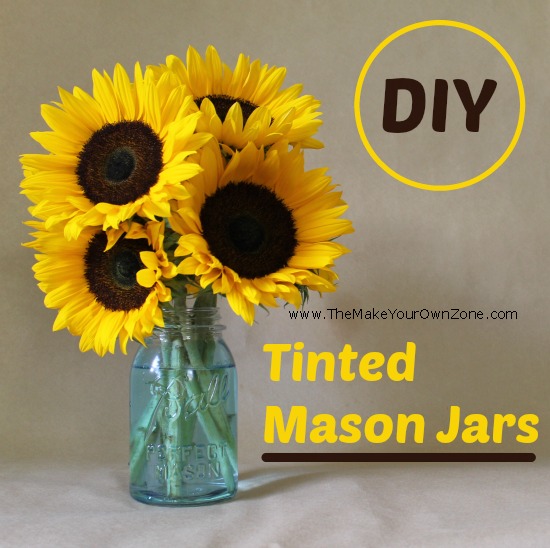