Making homemade cleaners can be a great money saver and a fun creative outlet too.  There’s a satisfying feeling to getting some ingredients out of the pantry and with just a bit of measuring and mixing, you’re able to make what you need for your household cleaning.

But that being said, there are definitely some things should you NOT mix together when making homemade cleaners. Certain ingredients can create ineffective gunk at best, and toxic fumes at the worst.

So creativity is good, but it needs to be balanced with your best research if you’re going to try to create your own cleaning mixtures, and we’ll be taking a closer look below at which combinations can cause problems. 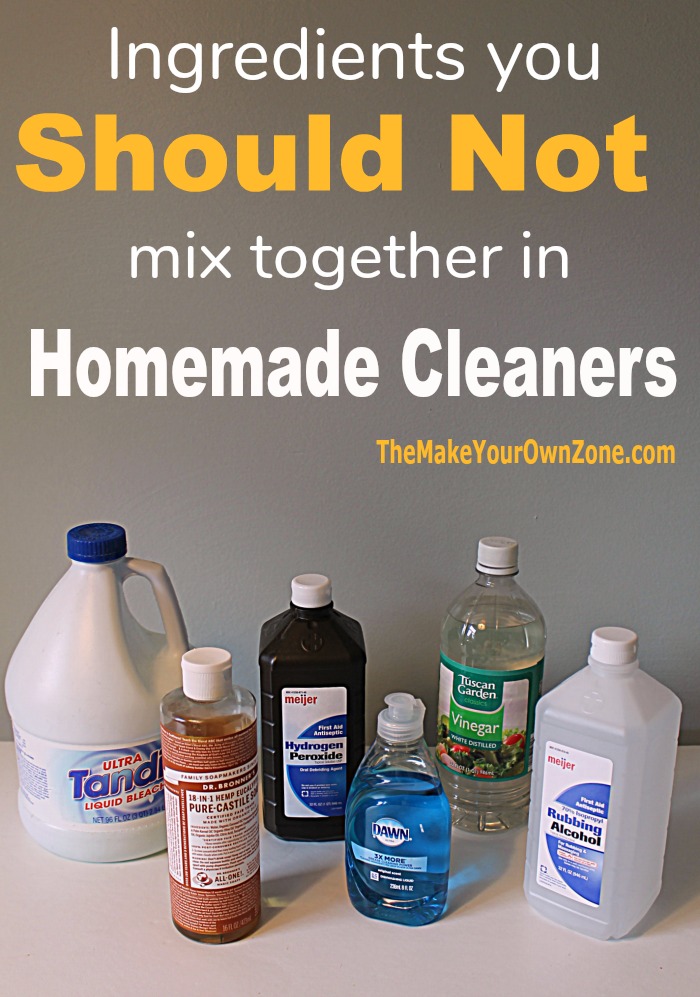 There have been a few other times I’ve touched on the subject of homemade cleaners, chemicals, acidity, and etc.  When I wrote about regular vinegar vs. cleaning vinegar, I never expected to get so many interesting comments from people sharing their chemical knowledge on the subject of the acid in vinegar.  And it’s also been a little pet peeve of mine when I see green cleaning recipes shared on Pinterest that are touted as “Chemical Free!” and so I decided to write about how really, all homemade cleaners include chemicals.

Yes, if you’re going to make your own cleaners you have to think about the science too and it’s good to learn some of the basic do’s and don’ts. Let’s take a look . . .

Only Mix Bleach With Water

Bleach doesn’t show up much in green cleaning recipes but nevertheless, it can create some of the worst combinations so it needs to be discussed.  Bleach should only be mixed with water if using it for cleaning purposes. If mixed with the wrong thing, bleach can cause toxic fumes that can greatly irritate and do damage to skin, eyes, and the respiratory system.  For instance:

Bleach + Ammonia =  Chloramine Gas  Inhaling the vapors of this toxic gas can give you shortness of breath and chest pain, as well as throat burns and other respiratory damage.

Bleach + Rubbing Alcohol =  Chloroform   Another lung irritant and vapors can cause nausea and dizziness, as well as damage to lungs, eyes, skin, and the nervous system

And finally, here’s one that may surprise you – –

Bleach + Dish Soap = Possible Toxic Fumes   Dish soap? Really? Yes, it can happen! I wrote about this a bit more in my post about combining homemade laundry soap made with Dawn with bleach in a laundry load (which I actually decided was OK even though some disagreed with me). My research on this showed that some dish soaps contain an ammonia based chemical and can create the same problem with fumes as the bleach/ammonia combo described above. I know some folks may be in the habit of putting a bit of bleach in a sinkful of soapy water to thoroughly clean dishes, but this is not a good idea.  In fact, here’s an excerpt from an email a reader sent me (after reading my post about Dawn dish soap and bleach) describing her experience:

. . . I used Palmolive dish soap and bleach in the shower. I had put the dish soap on to soak and then thought I would use some bleach to clean the shower handle. When the two mixed, I began to have burning in my nose and eyes. I ran out of the room to my computer and the first thing that came up was “Make your Own Zone” (my new favorite website!!!) I knew I could not mix bleach and ammonia, but I didn’t understand the problem with dish soap, until I read your blog. Well, I opened the window, turned on a fan, and obviously, I’m still alive. I did end up washing out my nose and throat because the mixture really did create some potent fumes. I just wanted to say “thank you” and keep up the good work.

So when it comes to bleach and homemade cleaning, you should only mix it with water – nothing else! 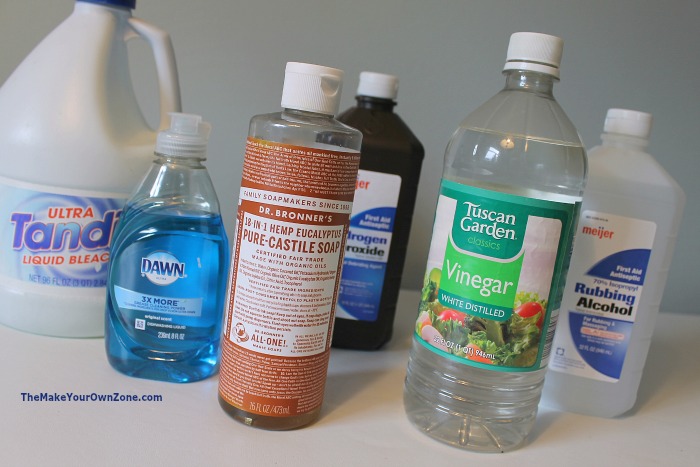 Not Everything Mixes Well With Vinegar

Vinegar is a great all purpose cleaner and there are all kinds of homemade cleaning recipes that include vinegar in the ingredient list. BUT vinegar is an acidic liquid and doesn’t always combine well with other things.  Of the three combos we’ll look at next, one can create a corrosive irritant while the other two just create questionable cleaning.

Vinegar + Hydrogen Peroxide = Peracetic Acid   It might be tempting to mix these two natural disinfectants together but doing so creates peracetic acid, a corrosive acid that’s an irritant to skin and eyes. Instead you can use them separately as a very effective homemade disinfecting duo.  Just don’t put them in a spray bottle together!

Vinegar + Baking Soda = Mostly Water & Sodium Acetate   There’s nothing dangerous in this mixture because vinegar and baking soda basically cancel each other out, the one being acidic and the other alkaline (or base). But most advice says there’s not much benefit in this combination either. After all the fizzing is done, you can be left with a solution that’s rather like salty water.  Now, I carefully avoided mixing these two based on this chemistry BUT a while back I forgot my rule and made a homemade soft scrub with baking soda and lemon juice (another acid that created fizzing) and it’s one of my most effective cleaners on soap scum!  A few years ago I also shared a recipe for a homemade fabric softener that combined vinegar and baking soda because it was a recipe many people said they had good success with.  This has left me wondering what exactly the best advice is for this combo.

Vinegar + Liquid Castile Soap = Oily & Lumpy   This is another mix that’s not dangerous, but not useful either. Once again, these two ingredients are cancelling each other out (one being acid and the other base).  Vinegar and castile soap are two very popular green cleaners but if you add vinegar to liquid castile soap, it will immediately turn a cloudy white color and be filled with lumps.  The soap will break down (or become unsaponified) and will become oily and curdled looking and will no longer be useful for cleaning.  However I did also take a look at some of the recipes in one of my favorite books of homemade cleaning recipes (Clean House, Clean Planet) because I remembered it included some instructions on this topic. Some of her recipes include both vinegar and liquid soap (with other ingredients of baking soda and water), but the vinegar is always added last to avoid this issue.  So it might still be possible, you just can’t add them directly to each other. 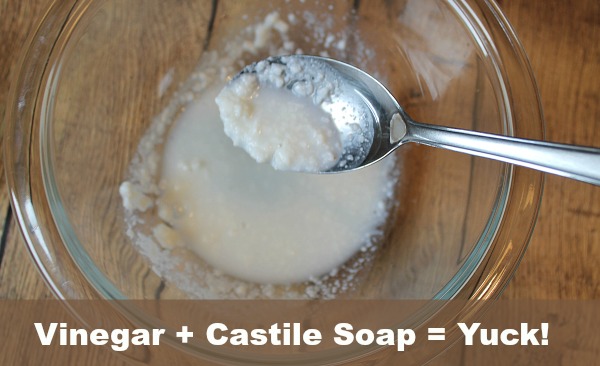 There’s still some room for creativity when mixing up your homemade cleaners (for instance trying different essential oils in your cleaners) but you should always take care, with bleach and vinegar especially.   I try to practice “careful creativity” and have found that many homemade cleaners can be water-based with just a few carefully chosen ingredients added in.  I would encourage you to always do your due diligence and research to stay safe when mixing up any new homemade cleaner idea. 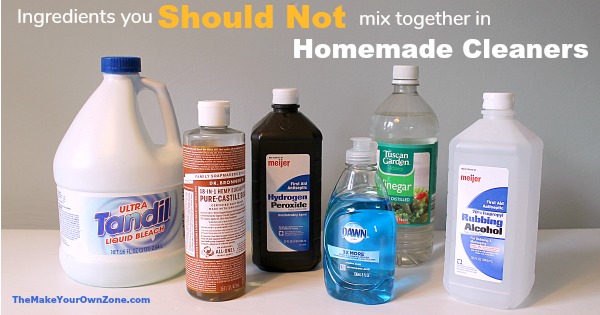