Once in a while when I’m out and about I treat myself to lunch at Panera Bread, and one of my favorite things to order is their Summer Corn Chowder. But as the name implies, it’s an item they have on their summer menu and you can’t always get it at other times of the year. So if I get a craving for this soup during the winter, well then it’s up to me to just make my own summer corn chowder because I think it’s delicious at any time of the year!

The last time I was enjoying this corn chowder at Panera it occurred to me that it was a lot like a potato and corn soup I already make at home. I decided with a bit of tweaking I could turn my recipe into a nice little copycat version of the Panera summer corn chowder – and it worked!

I was going to keep experimenting a little bit but the last time I made my copycat version, hubby declared it was a winner and that it was great just the way it was. “This is delicious”, he said, “stop messing around with it!” Haha

So now that hubby has given it two thumbs up, I’m going to keep things as they are, and that’s the recipe I’m sharing here today. I don’t know exactly how Panera makes their recipe (although they do share their ingredient list which I checked out and used for my ideas). When we did a side-by-side taste test of my soup and the Panera soup, the Panera soup was a bit thicker and hubby and I both agreed the Panera soup had an almost “cheesy” taste even though their published ingredients do not include any cheese. Nevertheless, this copycat is a tasty version with the same type of flavor combination, plus it uses a few shortcuts that make it a simple and frugal homemade meal.

This recipe begins by dicing some potatoes (you’ll need about 2 cups). I usually use redskin potatoes and just leave the skins on. I like to cut them nice and small too because the Panera soup is not a very chunky soup.

One little trick this recipe uses is that you boil the potatoes, but then drain the water off, being sure to reserve one cup of the potato cooking water. This water has some of the potato starch in it which can help a bit with thickening the soup.

Once that’s done, you dump the cooked potatoes and the cup of reserved potato cooking water back into the pot. Then it’s just a matter of dumping in the rest of the ingredients. I use a few handy shortcuts too: a can of cream style corn, a can of evaporated milk, and some salsa.

Yes, this is going to be easy! In fact you could probably stop there and you’d have a yummy soup.

But I usually add in some frozen corn kernels too (because hey, it’s corn chowder after all), and then I season it just a bit with some garlic salt and white pepper.

If you want this recipe to be vegan (instead of vegetarian) you could also substitute in 1-1/2 cups of a plant milk (like almond or soy) instead of the evaporated milk.

So I’ve been very happy with this soup that not only goes together fast, it’s a great homemade solution that let’s me enjoy my favorite summer corn chowder any time of the year. And you can make a whole pot of this soup for less money than one bowl of soup at the restaurant. It’s a win-win when you make your own! 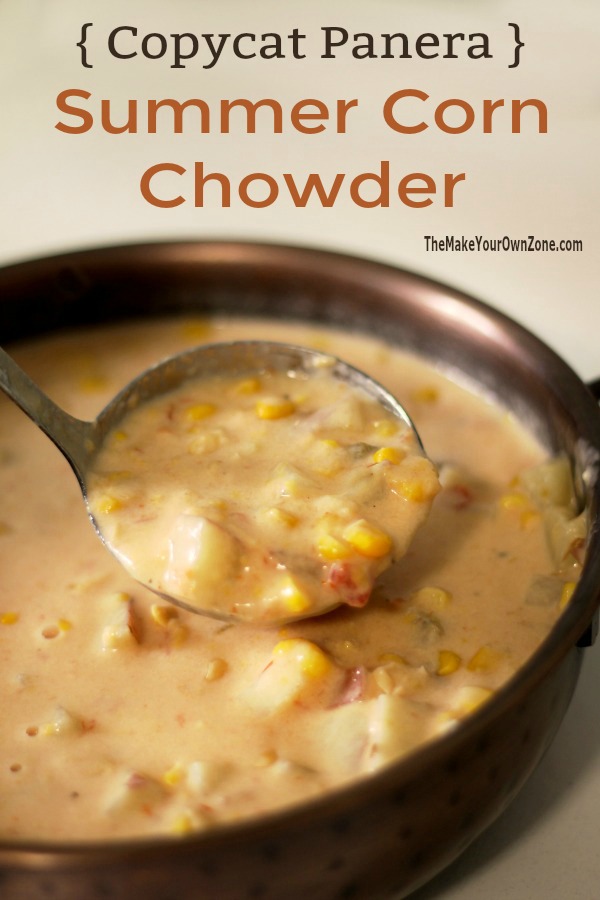 For a vegan version of this recipe, substitute 1-1/2 cups of a plant milk (like almond or soy) for the can of evaporated milk.