One of the best tools you can have at your disposal in the kitchen is a good knife.  Once you start doing more of your cooking from scratch and work at finding ways to Make Your Own stuff, you’ll find yourself doing more slicing and dicing and chopping.

I have a favorite chef’s knife that I got for Christmas a few years ago that I love, BUT –  I’m a little embarrassed to admit that I wasn’t doing a very good job of taking care of it.

Little rust spots were popping up here, there, and everywhere on my knife.  I’m pretty sure it was because it would set in my dishwasher after a cycle and not be completely dry.  Whatever the reason, more and more little rust spots were appearing and I was living in denial and pretending they weren’t there because I didn’t really know what to do about it. 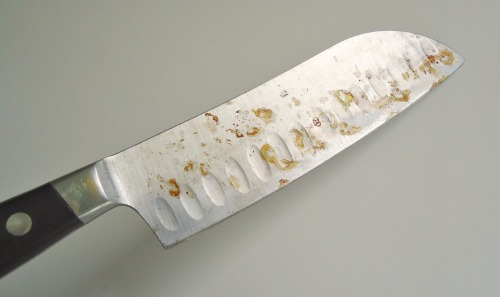 But after just so long I couldn’t really ignore the problem anymore.  It was time to see what could be done, and to see if there was a good DIY solution to get rid of rust spots on a knife.

Here’s what I tried and what finally worked:

I read somewhere that you could clean a rust spot off a knife with a piece of crumpled tin foil.  I decided it was worth a shot and wadded up some tin foil and started rubbing.  Almost as soon as I started, I didn’t like what I was doing.  The rust spots weren’t coming off and I felt like I was scratching the dickens out of my knife and ruining the finish.  I stopped and moved on to the next attempt.

Pinterest told me that if I soaked my knife in lemon juice I could get rid of the rust spots.   Sooooo . . . I filled a glass with some lemon juice, plopped my knife in it, and waited about 15 minutes.  Nothing.  I let it soak a little longer and tried scrubbing it some more, and then soaking some more.  Still nothing.  Oh well.  Time to move on to attempt #3.

OK, this isn’t really a DIY solution, but it was the solution that worked. I resorted to one of my three store bought cleaners that I can’t give up.  I got out the Bar Keepers Friend.  This scouring powder totally did the trick and in fact worked so quickly that the rust spots were gone after only a few seconds of rubbing.  Amazing.

So there you have it.   As much as I enjoy finding homemade remedies, this was one of those times where the store bought item sure seemed to provide a better solution.  If you too have a favorite knife with some rust spots that you want cleaned away, I would recommend giving it a scrub with Bar Keepers Friend   As you can see in the before and after picture below, you’ll be rewarded with a shiny clean knife that looks almost as good as new again. 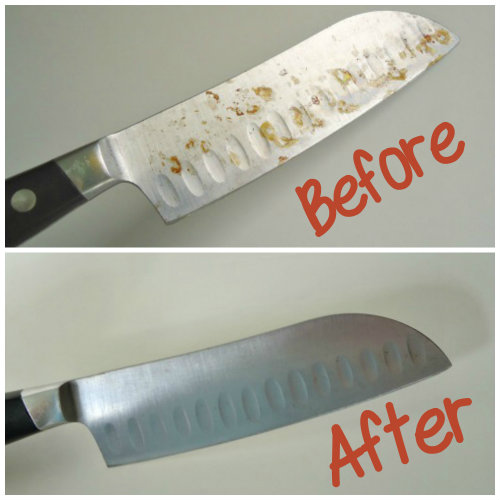 This post is linked to:  Buttercream Bakehouse Linky Party, Coastal Charm Nifty Thrifty Tuesday , Feeding Big In & Out Of The Kitchen