Now that we know how to make our own graham cracker pie crusts, we need something tasty to fill them up with, right? For summer time, this refreshing lime pie really hits the spot and stirs together super fast too for those hot days when we’re all feeling a tiny bit lazy.

Frozen limeade juice concentrate is the ingredient that gives this pie its flavor.  You’ll need to let the frozen concentrate thaw, and then use only 6 ounces (half of the 12 oz can).

You can either just eyeball it and use half of the can, or you can get out your measuring cup and measure out the 6 ounces (which is 3/4 cup).  Just be sure you’ve let the limeade concentrate thaw so that it’s in liquid form and easy to measure and stir.

And what then can thrifty folks do with that half a can of limeade concentrate that’s left over?  Heaven forbid we throw it away!!

I saved my half a can of limeade and then made a second pie a week later.  This was a happy solution for us because I made the first pie for a social occasion and didn’t have any leftovers.  This gave us another pie just for gobbling down by ourselves.

You could also double the recipe and just make two pies right away, or you could use the remaining concentrate as it was intended (mixed with water to make juice) and use it as a beverage or for mixing into cocktails. 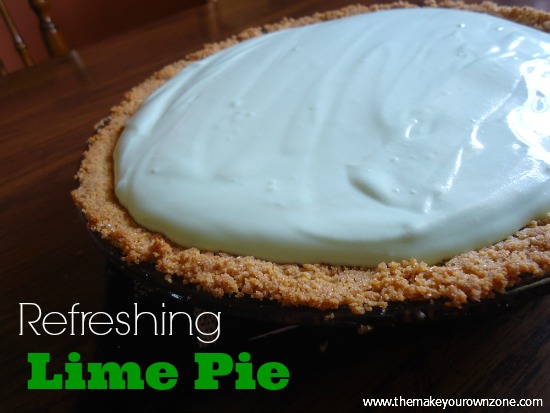 Stir together the limeade concentrate and the sweetened condensed milk in a mixing bowl.  Then slowly fold in the Cool Whip until everything is mixed well.  You can either mix in the entire tub of Cool Whip, or you can also reserve a cup of the Cool Whip for using as a garnish on the pie.  It turns out good either way.

At this point you have a white colored mixture so it’s helpful to stir in about 5 drops of green food coloring.  Slowly stir in the food coloring until it’s completely mixed in and you have a nice light green color to your liking.

Pour the mixture into your 9″ or 10″ graham cracker pie shell (either homemade or store bought) and distribute around evenly.

Put the pie in the freezer for about an hour until everything sets up.  Then move to the refrigerator as it will be easier to slice if it’s not as frozen.