Do you wish you could make a homemade savory snack without the time and effort of making homemade crackers?

Me too.  It always seems easier to whip up sweets like homemade cookies than to go to the effort of making tiny homemade crackers.  After an attempt at making homemade Wheat Thins, I never really gave it a go again.

Then I came across a recipe in one of my cookbooks for something called “Cheese Wafers” which was basically like a cookie, except with no sugar, and with cheese and cayenne pepper instead. Interesting!   It was in a fundraising cookbook I received as a gift several years ago that was a collection of recipes from famous people.  Some of the “famous” people were local celebrities, while others were nationally famous.

So who submitted the Cheese Wafer recipe?  Lady Bird Johnson.

For any readers who are from a younger generation, Lady Bird Johnson was the wife Lyndon B. Johnson, President of the United States from 1963 to 1969.  Lady Bird is probably best known for her commitment to beautifying the nation’s highways by having more flowers planted.  And for her cheese wafers (OK – kidding).

The little blurb  from Lady Bird (who was a Texan) with the Cheese Wafer recipe said:

Cheese wafers are a ranch staple which are served on all occasions, with salads, cocktails, etc. or just when one of the grandchildren gets the munchies.

Gosh, for those of who you remember the original Dallas TV show, can’t you just see J.R. and Sue Ellen standing around with their cocktails on their Texas oil ranch munching a cheese wafer?  Now I just had to give this recipe a try.

The recipe turned out to be simple to make, and did indeed result in a small cookie type of wafer with a zesty kick to it.  They were tasty little homemade snacks that took a lot less effort to make than homemade crackers and would be ideal to bring to parties . . . or family gatherings . . . or to work . . .

. . . Or just in case you get the munchies while sitting around your ranch sipping cocktails. 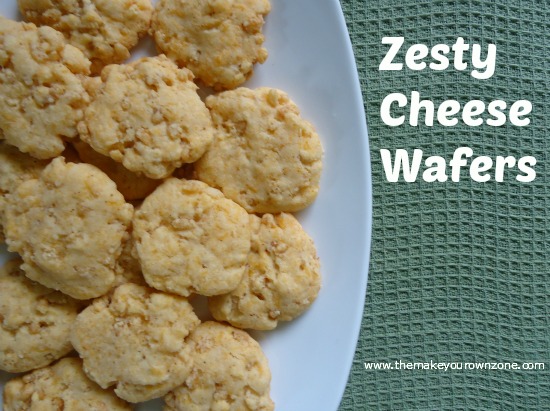 Cut the  butter into the flour until well mixed.  Mix in the seasonings.   Next mix in the shredded cheese, and finally mix in the Rice Krispies.

If you have a stand mixer, it would be ideal for this recipe.  If you don’t have a stand mixer (like me) then you are going to want to just get in there with your hands and mix things together, especially when you get down to mixing in the cheese and Rice Krispies.   When finished, the dough sticks together rather than being crumbly.

Drop by small teaspoons onto an ungreased cookie sheet and flatten with a spoon – or – You can also roll them into small balls and then flatten them slightly with your hands. 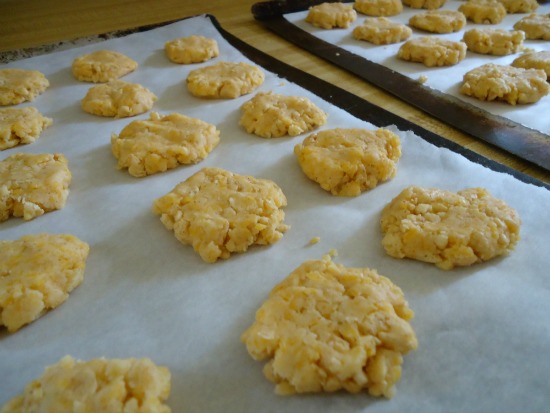