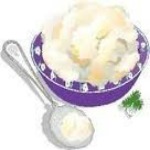 A big bowl of mashed potatoes makes a great side dish when you’ve got company coming for a meal.  If only potatoes didn’t have to be peeled!  It’s a rather tedious and boring chore in my humble opinion.

That’s why I love this recipe that let’s me make my mashed potatoes ahead of time.  I can do all the peeling and boiling and mashing and mixing the night before and then let it sit in the refrigerator overnight.  Then I simply pop it in the oven on the next day when I have company coming.  Plus the butter, sour cream, and crumb topping in this recipe gives it a boost of flavor too.

Put the potatoes in a saucepan and cover with water.  Bring to a boil.  Turn heat down to a slow boil and cook for approximately 20 minutes or until potatoes are cooked and tender when poked with fork.

Drain the potatoes and place them in a large mixing bowl.  Add the butter, sour cream, salt, and pepper.  Use an electric mixer to beat the ingredients together until well mixed and fluffy.  Put the potato mixture in a greased 2 quart casserole.  Cover and refrigerate overnight.

The next day when you want to make your potatoes, bake them in a preheated 325 degree oven, covered, for 45 minutes.  Make the topping by combining the bread crumbs and the melted butter.  Top the potatoes with the crumb mixture and bake for an additional 30 minutes, uncovered.

Try This Too!
This recipe works just as well when cooking it the day you make it too.  If the potato mixture is not coming cold out of the refrigerator, it doesn’t have to be baked as long  (in fact, I’ve debated sometimes if it would even have to be baked at all – they look pretty tasty right there in the mixing bowl!)  But what I usually do if I want to serve them on the same day is I put the mixture in the casserole pan, top with the crumb mixture right away, and then bake for about 30 to 45 minutes thinking that gives the flavors some time to mingle, and the topping gets baked too.