I’ve always thought that Christmas is a season that can bring out our inner craftiness. Even if you’re not willing to be crafty at other times of the year, you might just give it a go for the holidays. And there’s not much else to do during the cold months anyway so hey . . . let’s get crafty and Make Our Own!

Only a few supplies are needed for these little trees.  You need some kind of a cone shaped form covered in plastic wrap, crochet thread, Mod Podge, and a foam applicator brush.  If you want to dress things up a little bit, you might also like to have some small adhesive gems for decorating your trees.

As mentioned above, I used my inexpensive homemade Mod Podge for this project and it worked great. It’s a simple mixture of glue and water and you can get the complete details for that here:  How To Make Homemade Mod Podge

For the cone shaped form, I liked using a 6″ Styrofoam cone that I already had in my craft supply stash. This was a nice manageable size to work with and resulted in just the right sized little tree I wanted for my shelf. However if you use a Styrofoam cone, they often have flat tops so you may have to improvise and attach a little piece of paper rolled into a cone shape to make a pointy top (I used a piece of an index card attached to the cone with a couple straight pins).

I also made a slightly larger tree using a 12″ paper mache cone from the craft store. You could also make your own cone in any size you wish using a piece of lightweight cardboard (in a circle shape with a “pie sliced” piece cut out of it) that you roll into a cone.

You should be able to find crochet thread in the craft stores too.  They usually come in spools of at least 100 yards which gives you plenty of thread so you can keep winding around and around the cone as you make these trees. You can also use metallic crochet thread (which I used in a silver color for the larger tree I made).

How To Make a Tabletop String Christmas Tree

Once all your supplies are gathered, here are the steps. (Printable instructions are at the end of this post too).

Step 2: Make a small slip knot at the end of the crochet thread and slip it over the tip of you cone.

Step 3: Start winding some of your crochet thread around the top of the cone. After you’ve done a little bit, dip your applicator brush in the Mod Podge, and dab some on the string you have wrapped so far to help hold it in place.  Keep wrapping the thread, and dabbing it with Mod Podge as you work along.

Step 4: Go up and down the cone several times, winding the thread around in random patterns, and dabbing with Mod Podge as needed to hold things in place, until you are happy with the amount of coverage of string on the cone. Be sure to do a couple of good wraps of string around the bottom of the cone to give the tree a bit of a base for standing.

Step 5: Cut the string and give it a dab of Mod Podge to hold it in place. Then do a final dabbing with Mod Podge over all of the cone.

Step 6: Let the tree dry for several hours. I always let mine dry over night to assure it is completely dry and stiff.

Removing The Tree From The Cone

Now this last part of the process may take just a bit of patience, especially if you have used a Styrofoam cone. If you use a paper cone of some sort, it’s easier to just kind of fold the cone a bit, which let’s you then slide your plastic off the cone, and then slide the tree off of the plastic.

However for a Styrofoam cone, you just sort of have to keep twisting and wiggling for a bit, until the tree starts coming loose from the plastic and then you can slip it off the cone.  Don’t worry and keep calm. It’s not stuck on there forever!

Once the tree is off the cone, you can decorate it with some small adhesive gems. These type of gems are usually sold in the scrapbooking area of craft stores.

And then your trees are complete!  Set them out for display wherever you need a little extra Christmas cheer.

And finally, remember to enjoy that each of these trees is a one-of-a-kind creation and don’t stress too much about absolute perfection. Part of their charm is that these string trees have some homemade whimsy to them, so have fun and enjoy making your own! 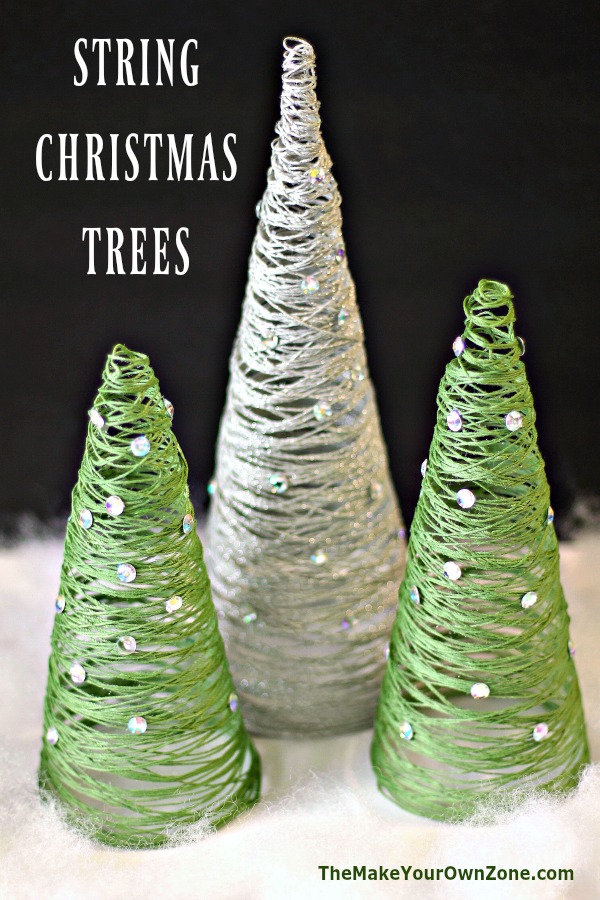 These fun and whimsical string Christmas trees will add some cheer to your holidays and make festive decorations for your table or shelf.
Keyword: Christmas
Author: Beverly

The smaller trees in this blog post were made using a 6″ styrofoam cone and green crochet thread. The larger tree was made using a 12″ paper mache cone and metallic silver crochet thread. Some styrofoam cones can have flat tops so you may need to add a small piece of light cardboard rolled into a cone shape at the top to make it pointy. I cut a small piece from an index card to do this and held it in place with a couple of straight pins.
Share305
Pin214.1K
Email
Share
214.4KShares