Are you a thin crust pizza type of person?  If you are, then I think you’ll like this frugal recipe for a homemade pizza crust that only uses just a little over one cup of flour.

I’ve been looking for a good recipe for a homemade pizza crust for a long time.  But I’m definitely a thin crust kinda gal and so many recipes I tried were just too thick and doughy for my taste.  Finally I stumbled across a recipe for a Thin Crust Chicken Bacon Artichoke Pizza and although I wasn’t that interested in doing the fancy stuff with artichokes, I was very interested in the thin crust part of the recipe.  Could it be I had finally found what I’d been searching for?

I’ve made this crust several times now and it does indeed make a very nice thin crust.  I noticed this week for the first time that the original recipe said to put it in a 16″ pan.  I think it’s thin enough in the 12″ pan I’ve been using, but apparently you can take it one step further if you want it really thin. 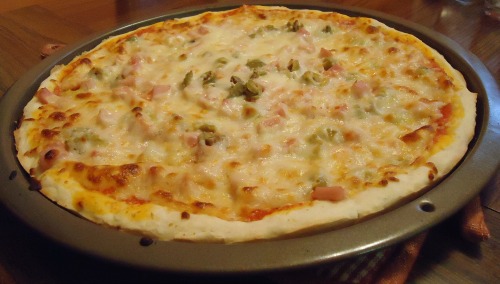 1.  Place warm water and salt in a medium mixing bowl.  Add 1 cup of the flour and the yeast and stir.

2.  Add the remaining 1/3 cup of the flour and mix with your hands and knead until you have a well mixed ball of dough, adding more water if you need to.

3.  Let your ball of dough rest in the bowl, covered with a clean towel for at least 10 minutes, or for up to 30 minutes.

4.  Grease a 12″ pizza pan and then gently spread the dough out in the pan.  I put a little butter on my hands and then a little flour to keep the dough from sticking to my hands too much.  Have patience with this step.  It seems at first like there isn’t enough dough, but there is.

5.  Let dough rest for another 15 minutes and then top with sauce and toppings of your choice.