When it comes to making  pizza at our house, I’ve gone the homemade route in baby steps.  For many years I just bought frozen pizzas, and I’ll admit that they’re a nice convenience food to have in the freezer for a last minute meal idea.  But after awhile I grew rather weary of the same old frozen pizzas and instead found I was starting to prefer buying the pre-made pizza crusts.  This first baby step of ready-made crusts let me make a semi-homemade pizza with my own customized toppings, but without the need of having the skill and know-how for making a homemade pizza crust.

But now I think I might be able to take that last baby step for making pizzas from scratch with these two simple recipes – one for homemade pizza sauce and another for a homemade pizza crust.  Both of these recipes passed the flavor test at our house, and passed the test for being pretty quick and easy to make too. 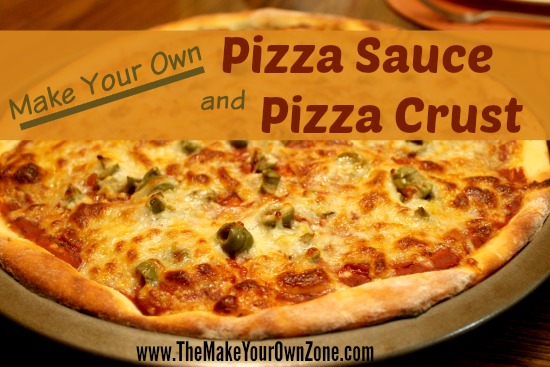 I wrote about making homemade pizza crust before (Homemade Thin Crust Pizza) but found I just really didn’t stick with making that recipe.  But I’ve got high hopes that I’ll be better at sticking with this new pizza crust recipe because it uses a very handy ingredient shortcut.  What’s the shortcut?  Greek yogurt!  There’s no yeast to mix in or any waiting for rising dough.  It’s pretty quick and simple!

And I think I finally have a homemade pizza sauce recipe that I’m happy with too.  That’s because I’m really liking my homemade Italian seasoning blend that works great for this pizza sauce – AND – I’ve learned to be patient.  As is so often the case with homemade recipes that you spice up yourself, they really turn out the best if you let them set for an hour or two and let all those yummy flavors mingle.  So yes, this homemade pizza sauce recipe is quick and simple in that it stirs together easily, but you’ll get the best final product if you plan ahead and figure in enough time so it can rest and soak in the flavors. 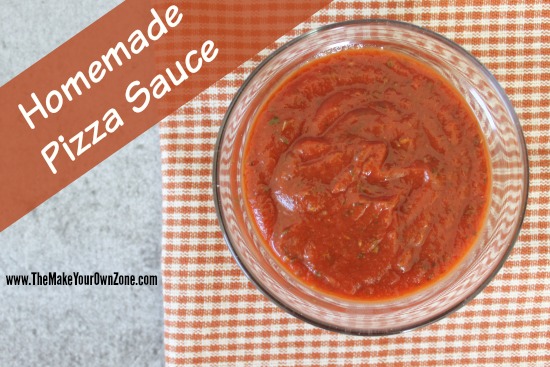 Combine the can of tomato sauce and about half of a 6 oz can of tomato paste in a mixing bowl.  Add the brown sugar and the spices and mix well to combine.  Let the pizza sauce mixture sit in the refrigerator for an hour or two before using to get the best flavor quality by letting the spices mingle.  Makes enough for two 12″ pizzas.

Now, let’s move on and take a look at how you can make your own pizza crust dough using greek yogurt.

Combine the flour, baking powder, and salt in a small mixing bowl.  Place the greek yogurt in a medium sized mixing bowl and then slowly add the flour mixture.  I start out mixing it with a spoon or spatula, but always finish up by mixing it with my hands.  For the last bits of the flour mixture being added, I usually make an indentation in the dough mixture, pour the last bit of flour mixture in the indentation, and then fold the dough over it to keep mixing all the flour in.  I do the same thing with any remaining flour that’s hanging around on the bottom of the bowl as I’m finishing getting everything all mixed together.

Next, on a floured surface, you will knead the dough for a few minutes.  It’s helpful to also flour your hands for this step.  The dough should be soft and a bit tacky, but not so sticky that it leaves dough on your hands as you’re kneading.  Keep flouring your surface and/or your hands as needed during this step.  (This step actually goes faster than it sounds and is almost kind of relaxing and therapeutic!)

I suppose if you have a nice Kitchen Aid stand mixer it can be used for the kneading step too.  {yours truly does not have any fancy schmancy mixer}

Finally, with a rolling pin, roll out your ball of dough into a circle shape and transfer to a 12″ pizza pan.  You can finishing stretching and adjusting the dough if needed in the pan. 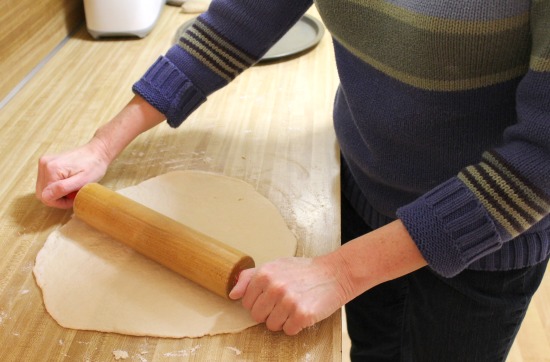 Add any sauce and toppings desired.  Bake at 450 degrees for 12 minutes.

In the picture below you can see how far half of the sauce recipe above spreads around and covers this crust in a 12″ pan. 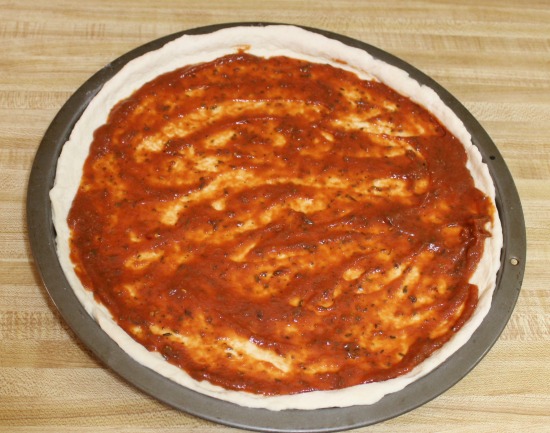 ~~ I’ve also made this pizza crust with vanilla flavored greek yogurt as we usually have a big tub of that in our refrigerator at all times.  There was a subtle flavor difference but it still worked quite well.

~~ I’ve always used this dough recipe in a 12″ round pizza pan, but I’m sure it could work in a rectangular pan too or perhaps for two smaller sized pizzas.