I’m always pleasantly surprised at just how tasty and simple a homemade liqueur can be and today’s recipe is no exception.  This recipe for homemade Baileys Irish Cream is a no-stress mixture that stirs together fast, tastes yummy, and makes a nice gift too.

Making my own copycat version of Baileys did start me wondering  (which is pretty typical of me) . . . why isn’t Baileys refrigerated in the store?   It’s cream, isn’t it?

After a quick reading of Wikipedia I learned that the cream and alcohol in Baileys is homogenized to form an emulsion, with an emulsifier containing refined vegetable oil. That’s what prevents the separation of the cream and alcohol during storage.   The manufacturer says no preservatives are used and instead the alcohol preserves the cream.  They also say Baileys has a shelf life of two years, whether the bottle is opened or unopened, and whether it’s refrigerated or not.

Well.  That’s making my homemade stuff sound better all the time.   I like the idea of some fresh half & half and whisky stored in the fridge.  Thank you very much. 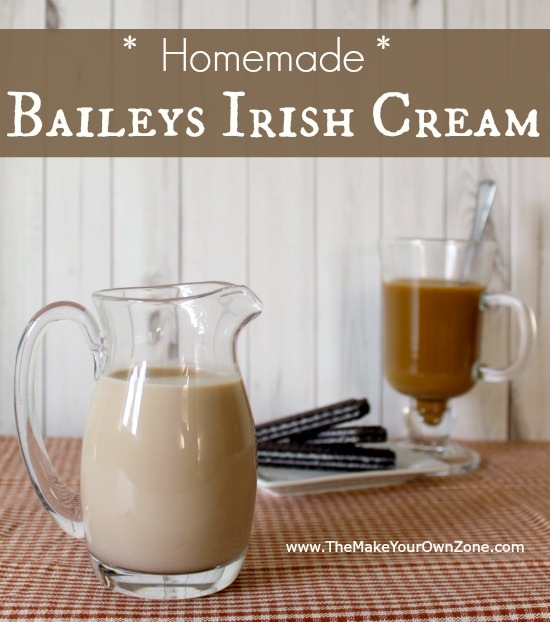 So yes, we’re going to whip up a fresher version using half & half, whiskey, a can of sweetened condensed milk, and a few more goodies.  You might notice, however, that in the recipe below I decided to simply list the alcohol as “whiskey” and not be any more specific than that.

BUT –  if you’re a person not in the habit of buying alcohol, you might find yourself standing in the liquor aisle of your favorite grocery store, scratching your head, overwhelmed by the many different versions.  There’s bourbon whiskey, Canadian whiskey, Irish whiskey, and other whiskeys I don’t know nuthin’ about either.   Some  are kind of pricey, others are little more inexpensive.  And frankly, I think any of them would work OK in this recipe.

Some homemade recipes for Irish Cream tell you to use Irish Whiskey too, I guess because they think then there’s an authentic Irish vibe going on.   But that’s one of the more expensive options and I didn’t want anyone to feel like they had to hold themselves to that to make the recipe work.  I think this recipe is flexible and just about any bottle you bring home from the store that says “whiskey” somewhere on the bottle should do the trick.

If you have a favorite whiskey brand, then go for it.  If you want to splurge on an expensive brand, again, I say go for it.  If you want to stick with one of the more reasonably priced brands (maybe Canadian Mist) that’s going to work too.  What did I use?  A brand probably nobody else has ever heard of.  I used Old Crow whiskey which I buy at my local Meijer grocery store.  A close friend likes this brand and on his recommendation we gave it a try at our house and it works for us!

Adding Coffee To Your Homemade Baileys

Finally, there’s also a bit of instant coffee added to this mixture.  I like to dissolve my instant coffee in a small amount of water first.  I feel like then it’s in a liquid form and will blend into the mixture better.  Maybe that step isn’t necessary, but I like to do it that way.

Also, if you don’t have any instant coffee, you could probably substitute some strong fresh brewed coffee (maybe about 1/4 cup ?)  Just be sure to let any coffee cool completely before adding it to your copycat Baileys mixture. 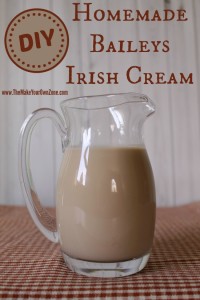 A creamy liqueur like this homemade version of Baileys is most often used to add a little kick to a cup of coffee, hot chocolate, or even tea.  Once of my favorite ways to use my homemade Baileys is in a Mudslide and you can find my recipe for that drink here (with a printable tag for the Baileys included too!): How To Make A Mudslide Dessert Drink & Printable Labels