Life gets busy.  We all have weeks when we feel too busy for homemade, and last week was one of those weeks for me. And my busy week also happened to coincide with my big batch of powdered homemade laundry soap running out.  I was even kind of feeling too busy to make my homemade Dawn liquid laundry soap!

So instead I decided to try out this easy homemade solution that requires no grating of bar soap (or microwaving of soap!) and instead uses the quick and easy hack of only using Oxi-Clean in the recipe rather than any soap. 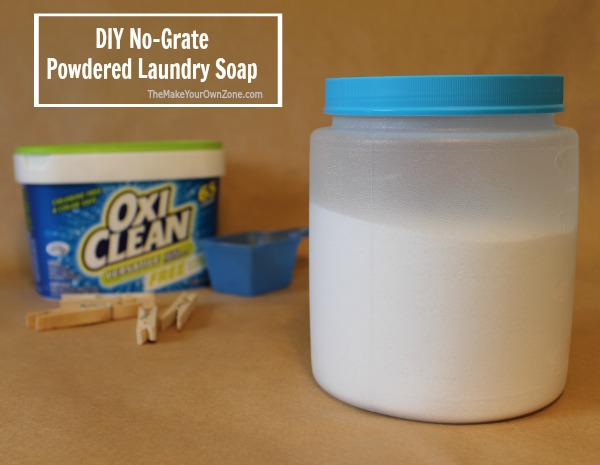 Because I like making homemade cleaners and laundry products I almost always have some washing soda and borax around (the other two ingredients in this recipe). I’m also a fan of Oxi-Clean so I usually have some of that around too.  This recipe uses equal amounts of each of those three ingredients so it’s simple to just scoop out a cup or two of each ingredient, mix them together a bit and you’re done!  You can just use equal amounts using the measuring scoop from the Oxi-Clean container too and then you don’t even have to go hunting for a measuring cup.

So far this recipe seems to do well on every load of wash I’ve used it on.  One common complaint of homemade laundry soaps with grated bar soaps is that soap (as opposed to detergent) can slowly make whites look dingy and make towels less absorbent.  Because this recipe has no grated soap there should hopefully be no worries in that area.  (You can read more here:  Soap vs. Detergent)

On the down side, this recipe might not be quite as frugal as using the bars of Fels Naptha soap which sell for about 99 cents a bar.  However I usually do make an effort to buy my Oxi-Clean on sale with a coupon to get the lowest price possible.  And if you’ve made do at home by creating this recipe with what you have on hand instead of going to the store, then potentially you’ve saved yourself time and the temptation to spend more on other things once you start walking around the store. AND – I think this recipe would still be cheaper than store bought laundry detergent too. 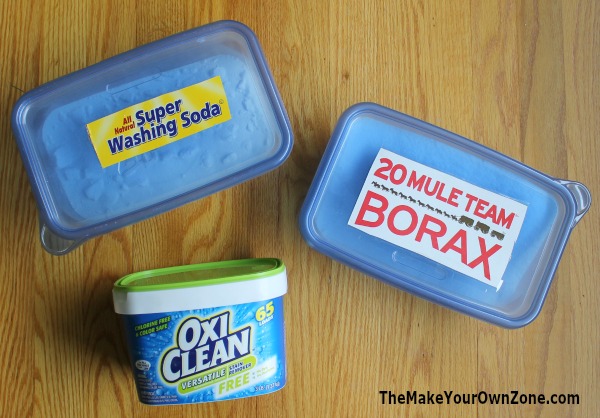 So as you can see in the picture above, I now keep my washing soda and borax in ziploc storage containers.  I cut out the product name from the box and tape it to the lid so I know what’s inside.  It’s a solution that’s been working great for me. 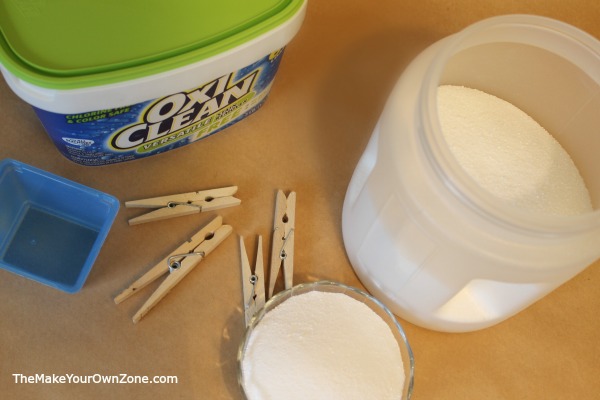 You Will Need Equal Amounts of the following ingredients.  I used:

Combine the washing soda, borax, and Oxi-Clean and store in a covered container.

I use approximately 3 tablespoons per load.   For the 6 cup batch I made with the measurements listed above, I will be able to wash at least 32 loads of laundry.

I thought about putting this mixture in a canning jar to make nice looking pictures, but you know what? Canning jars are lousy for scooping out your homemade mixture.  And I’m not gonna lie to you and act like I’m using that for my day-to-day life.  Instead I have this mixture in a round container with a nice 4″ opening that I picked up at the dollar store awhile back.  In my opinion it’s a better option because I can actually reach in and scoop out some of the mixture.