I think people fall into two groups when it comes to homemade laundry soap.  One group is pretty much freaked out by the idea and says “Thanks but no thanks.  Why would I want to make my own laundry soap?”.  The other group thinks it sounds like an adventurous money-saving idea and says “Sure, why not!” and once they give it a go will most likely keep making it over and over.

There doesn’t seem to be much middle ground when it comes to homemade laundry soap.

I, of course, am in that second group of folks that finds it quite fun and satisfying to mix up a batch of homemade laundry soap and have been happily doing it now for several years. But like so many other homemade transitions I’ve made, I keep tweaking things as I go along (like my updated homemade toilet bowl cleaner), and homemade laundry soap has been no exception.  I’m always willing to check out other ideas if I think improvements can be made.

When it comes to a liquid version of homemade laundry soap, I made a transition awhile back to an easy recipe for homemade liquid laundry soap made with Dawn dish soap. This has become my new go-to recipe and it does feel like an improvement over grating a bar of Ivory soap and melting it on the stovetop in hot water like I used to do.

But what I really wanted to write about today is a couple of ingredients that I’ve added to my recipe for Big Batch Powdered Laundry Soap to see if it will be an improvement for that recipe that we might want to stick with.  My homemade powdered laundry soap was already a pretty simple recipe that uses one box of borax, one box of washing soda, and a couple bars of grated soap.  So where was there room for improvement? 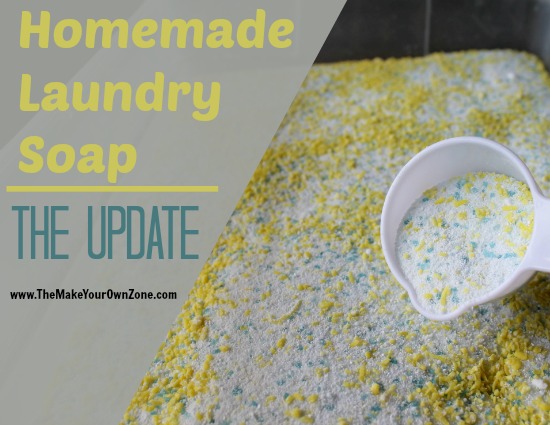 Well, I’ve seen recipes floating around for some time now that also add a container of Oxi-Clean and a container of Purex crystals to this same basic mixture.  I decided the next batch I made I would add these two ingredients into the mix as well to see if we liked it.

To Add or Not to Add?

I’ve been debating for awhile now the pros and cons of adding these two ingredients.

The cons?  First off, these two ingredients cost more money.  And if I wasn’t really saving money anymore with a homemade version, then why go to the effort?  I also wasn’t quite sure what the benefit of the Purex crystals were as it’s just labeled as a “laundry enhancer”. Did my recipe really need some enhancing?  Hmmmmm, maybe.  These two ingredients also take away a bit from the “natural” aspect of the recipe I’d been using.

The pros?  Well, I really like Oxi-Clean.  I REALLY do.  I thought this ingredient could add a nice boost to homemade laundry soap and  might also help with the “dingy whites” problem that can go along with homemade mixtures.  I also thought the Purex crystals might add some fabric softening benefit  {maybe that’s what the enhancing is ??} as well as adding a nice scent that’s not normally present in my usual recipe. 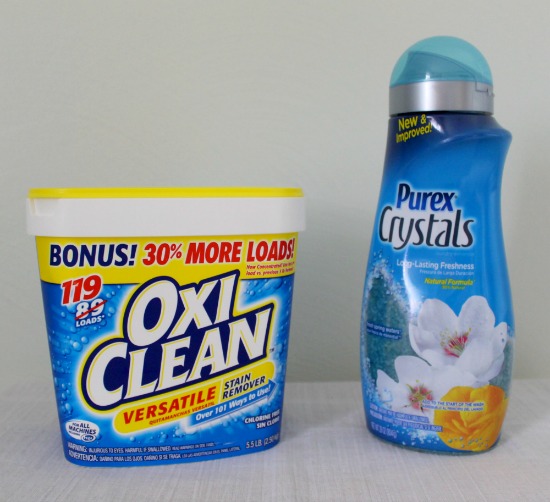 So last week when it was time to mix up a new batch, I decided, what the heck!  Let’s add them in and see how it goes.  These ingredients might add to the cost, but if found on sale or with coupons, could still be reasonably priced.  Adding these two ingredients also increased the size of the batch and  I’ll be able to wash many, many, MANY loads with this recipe so for the cost and I know this mixture will still go a long way.

And so far I’m liking that Purex enhancing thing that’s going on too.  🙂

I use a large Rubbermaid container for mixing up this recipe.  I first empty the entire box of Borax into the container.  Borax can be a little lumpy and this gives me a chance to smash it up a bit first.

Next, I mix in the entire box of washing soda.

Then, I added in my two new ingredients of Oxi-Clean and Purex Crystals.  (I only had a 5 Lb container of Oxi-Clean in the house so I just estimated and used about three quarters of the container).

Finally, I grated the 3 bars of Fels Naptha soap.  Normally for my big batch powdered laundry soap I only use two bars of soap.  However because of the increased volume with the two new ingredients, I added one more bar of grated soap too.

I use a small hand grater

to grate my soap and then I run it through my food processor too, just to get it into more finely sized pieces.

Add the grated soap to the mixture and stir everything around until it’s well mixed together.

Use about 2 tablespoons per load of laundry.  I use a 1/4 cup measuring cup and fill it about 1/2 full when I scoop.

I’ve used my new Version 2 on a few loads of laundry and so far, so good!  I does feel like the Purex has added some fabric softening and I’m hoping the Oxi-Clean will help keep my whites looking good too.  Whether I keep adding these two ingredients or not will probably all come down to whether I’m able to score them at good prices on sale.