Then I tried extending my dishwasher detergent with baking soda.  It worked pretty good, but I just wasn’t real motivated to stick with it.

Then my dishwasher died.

Yup, I was in the process of testing out this recipe when my good ole dishwasher went kaput.

We went a couple months washing dishes by hand while Hubby kept saying things like “This isn’t so bad, is it?” or “We don’t need to spend money on a new dishwasher” and “This is just like the good old days!” – and me saying things like . . .

“WHEN ARE WE GETTING A NEW DISHWASHER??”

I wasn’t even using my words.  I was just growling with crabbiness.

And so we got a new dishwasher.

BUT – then I was a little nervous to try a homemade mixture in my bright shiny new dishwasher.  The batch I had been testing out just sat there on the shelf for many months.

Until last week.  I remembered that this mixture had been working quite well when I was testing it out before and so decided to give it a whirl again.  I guess now that several months has gone by the dishwasher doesn’t seem quite so “new” anymore and I was ready to enjoy experimenting again with some homemade mixtures.

So how’s it been going?  Well, I’ve had nice clean dishes and the dishwasher is still working great.  So far, so good!

It’s a dishwasher additive that helps with hard water and keeps spots from building up on dishes and glasses.  It really made a difference and is why this recipe has worked so much better than the others I tried.  You don’t even need a rinse aid because the Lemi Shine works much like a rinse aid. 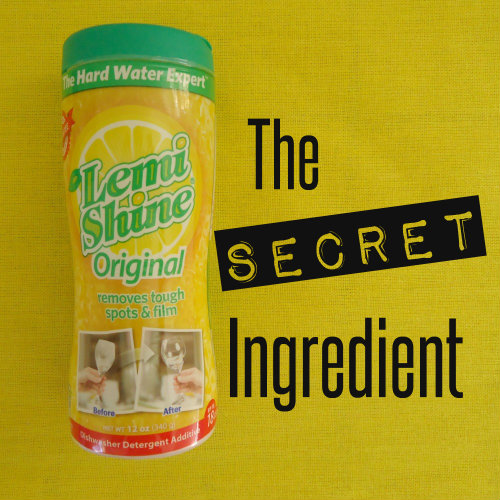 The other trick in this recipe that worked great is to leave it out for a couple days and keep stirring it.  The other homemade dishwasher detergent recipes that I tried usually turned into one giant rock hard clump that I would finally toss out.  The combo of the Lemi-Shine and the stirring for the first couple of days, kept this mixture from turning solid as time went on.

But Is It Worth It?

Yes, this homemade mixture has finally been a combination that works well in the dishwasher but now I’m wondering, is it worth it?

). This kept my homemade dishwasher detergent from being as frugal as I hoped it would be.

And if the point of a homemade dishwasher detergent is to use non-toxic and earth friendly ingredients, well I’m not sure what’s in Lemi Shine and what chemicals it might contain.

Nevertheless, I really like how the Lemi Shine works on my dishes.  The dishes have a nice smooth clean feel to them. This recipe also makes a pretty good size batch which lasts for a while because you only need a tablespoon per load, and which I think is still cheaper than the store bought dishwasher detergents.

So if you’d like to give it a try too, here’s the recipe.  It’s the best homemade dishwasher detergent recipe I’ve tried so far.

1.  Combine all ingredients in a large mixing bowl.  When everything is first combined it will have a fine powdery texture. 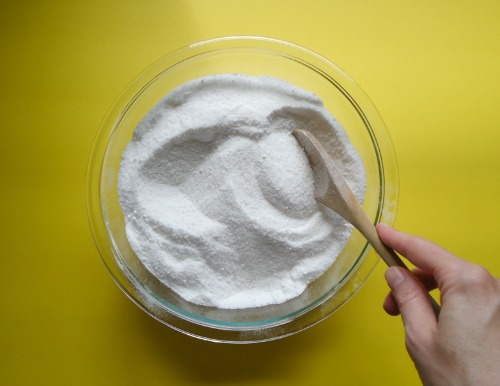 2.  Let your mixture set out in the mixing bowl, uncovered, for a couple of days.  It will get harder and start clumping up.  Keep stirring it every so often to break up the clumps.  After a couple days of occasional stirring you will have a mixture with a grainy texture and it will stop clumping up.   {See update at the end of this post if your mixture is not clumping} 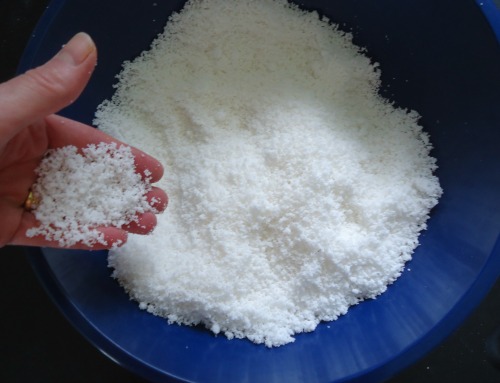 3.  Now you have a homemade dishwasher detergent mixture that won’t harden into a solid clump as time goes on, as well as a mixture that doesn’t leave dishes cloudy thanks to the Lemi-Shine.

4.  If you want to make the “grainy” mixture a little more powdery again, put it in a food processor and pulse it a few times.  I did this so I would have a finer mixture that would pour better from my homemade pour spout for a canning jar.

Update:  When I first made this recipe the weather was warm.  When I made a second batch of this recipe, it was cold.  Not just ordinary cold, but the polar vortex kind of cold during one of the harshest winters we’ve had in a long time.  AND – this recipe did not clump or turn grainy during the waiting period at all!  I’m assuming this was because the air in our house was very dry during such cold weather.  So after about a week, I quit waiting and went ahead and put some in a jar under my sink as usual.  At that point, it did start to clump and get grainy just a little bit, assuming again, that there is more moisture and humidity under a sink than in the spare room where I had the mixture just setting out waiting for it to clump.  I just stirred it up in the jar a bit to break up some of the clumps that had started to form.  Just wanted to give an update that the weather, heat, and humidity can apparently affect how much this mixture will begin to clump and get grainy during the waiting period.