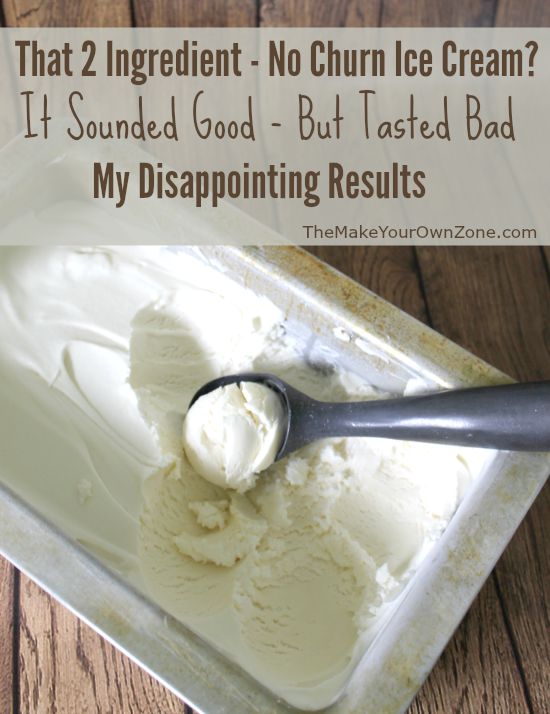 If it sounds too good to be true, it probably is.

That old saying came to mind this week when I was trying out a recipe for no-churn, two ingredient ice cream that I’ve been seeing all around the internet lately.

I had high hopes for this recipe after I stirred it together and tucked it away in the freezer to harden up. When I finally scooped it out into bowls, it looked like a tasty dish of ice cream and Hubby and I started eating away.

But two ingredient no-churn ice cream was too good to be true.  Half way through eating our scoops of ice cream Hubby and I both looked at each other and said – Blech. My stomach felt like I had just eaten a jar of marshmallow fluff or something.

Not that I have ever actually eaten a jar of marshmallow fluff.  But if for some reason I did, I’m pretty sure that’s how I would feel. 🙂

In case you have not yet seen this recipe, it’s a mixture of a can of sweetened condensed milk and two cups of heavy whipping cream.  You whip up the heavy whipping cream, stir it into the sweetened condensed milk, freeze for six hours, and just like that you have no-churn easy peasy ice cream.  You can add extracts for flavor if you wish too.  I added some vanilla extract to my trial batch.

But sorry.  After doing my own taste test I feel like this recipe is just an impostor.  The pictures sure look like ice cream, but it’s not.  It’s sooo not ice cream. 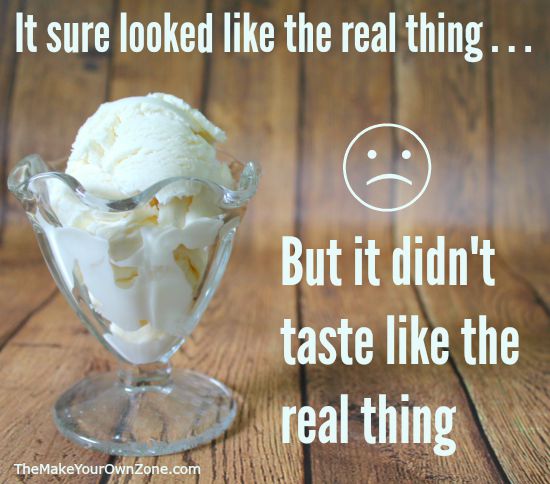 The flavor is off but even more so, the consistency is off which becomes more noticeable as you eat your bowl of ice cream and it starts to melt.  Instead of normal melty ice cream goodness, it turns into a heavy soupy goo that tastes too much like sweetened condensed milk and gives that unfortunate sensation that you’re eating something too sickeningly sweet for your own good – like a whole jar of marshmallow fluff. 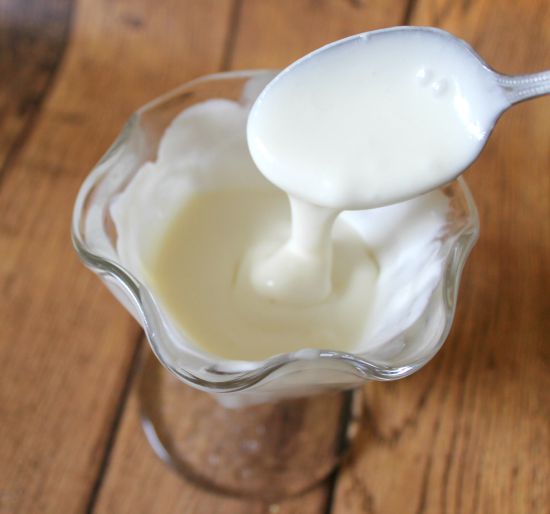 There sure seem to be plenty of people sharing this recipe on Pinterest.  Why??  I sure don’t know. Perhaps I did something wrong. Perhaps they like ice cream that tastes like sweetened condensed milk. Perhaps they all sit around and eat jars of marshmallow fluff.

So as much as I was hoping to give you all a super simple method to make your own ice cream, I really don’t think this recipe is the answer.  It’s getting tagged as one of my half baked ideas where I share some of my other concoctions that had less than satisfactory results.

Sometimes I feel like a recipe shows promise and deserves a “Try Try Again” attitude even if things didn’t quite work out the first time around.  But this ice cream?  I don’t think so.  I sincerely doubt I’ll ever be giving this recipe another shot – unless someone can convince me otherwise which sometimes happens around here when readers chime in and tell me what to try next.

Feel free to share if you have some advice!