Washing soda is an important ingredient for those of us making our own Homemade Laundry Soap.  Some folks, however, have a hard time finding this ingredient.  I’ve always been able to find the Arm & Hammer Washing Soda on the laundry aisle of my grocery store, but others who live in rural areas or overseas, say it can be hard to locate.  The solution?  Make Your Own!

Is it possible to make your own Washing Soda?  I’ve come across instructions for doing just that and decided to try it out for myself.   Homemade washing soda is created by heating ordinary baking soda, which changes its chemical make up.  Let’s first take a quick look at the differences between those two substances. 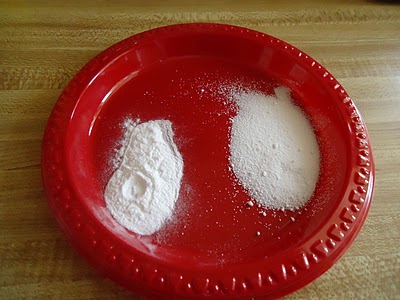 BAKING SODA vs WASHING SODA
Washing soda and baking soda are not the same thing, but they are close cousins.  The difference between the two is water and carbon dioxide.  Here’s a quick comparison:

The ph level is really where the difference lies in making washing soda a more effective ingredient for homemade laundry soaps.  The ph scale goes from 1 to 14, with 1 being very acidic and 14 being very alkaline.  A ph level of 7 is considered neutral. (Water has a ph of 7).

So washing soda with its higher alkalinity of 11 makes it better for stain removal.  This is why homemade laundry soaps call for washing soda, rather than just plain old baking soda.

Now that we know that washing soda is in fact the more desirable ingredient, let’s look at how to convert our baking soda into washing soda:

2.  Spread out your baking soda on a baking sheet.

3.  Heat the baking soda in the oven anywhere from 30 minutes to 2 hours.  At some point the texture should change and you then have washing soda.

DID IT WORK ?
Well, this didn’t seem to work like I had hoped it would.  I expected the baking soda to turn sort of grainy like the store bought washing soda and it never did.  I still looked the same to me.  I couldn’t really see any visible difference in the texture.

I left my baking soda in the oven for almost 3 hours, checking on it every half hour or so.  When I was nearing the 3 hour mark, I decided any money I was saving was getting chipped away by running my oven for so long so I ended my experiment.

I think the true test would be to see if the alkalinity changed.  Perhaps this summer when our pool is open I’ll do another little experiment and dissolve some of both in water and put the pool test strips in there to see how the ph level compares.

If anyone else has tried converting baking soda to washing soda, I would love to hear about it.