My first introduction to virgin coconut oil was during the cold months of January when I received a sample to review from Tropical Traditions.  That’s when I found out something important about coconut oil that I didn’t know before.

Even though it’s an oil, it turns solid in cold temperatures.

Yup, my coconut oil was pretty hard when it showed up at my door during a snow storm.  So I did what most of us folks here in Michigan are used to doing.

I waited for warm weather to come.  And I waited a *long* time.

But finally the sun started shining and temperatures were warmer, and I decided it was time to take another look at my sample jar of virgin coconut oil. But guess what?

It still wasn’t a liquid.  Even though coconut oil is said to melt at temperatures above 76 degrees, my jar of coconut oil has always stayed rather lard-like.  Not really hard, but definitely not a liquid either.

For people who like to use coconut oil for cooking, this isn’t such a big deal.  It will melt during the cooking process so it’s all good.  But if you want to use your coconut oil to make your own beauty products (like I did) then you have to get a little more creative.

Why use coconut oil for your homemade beauty products?  Most commercial moisturizers are filled with water which makes our skin feel moisturized when we put it on, but when the water dries, our skin feels dry again too.  In contrast when you use coconut oil, you will usually notice longer lasting results that can give you softer skin.

So what are some solutions for making your own beauty products using coconut oil when the temperatures are colder and your coconut oil keeps hardening up?

I’ve got three recipe ideas for you that will solve the problem! 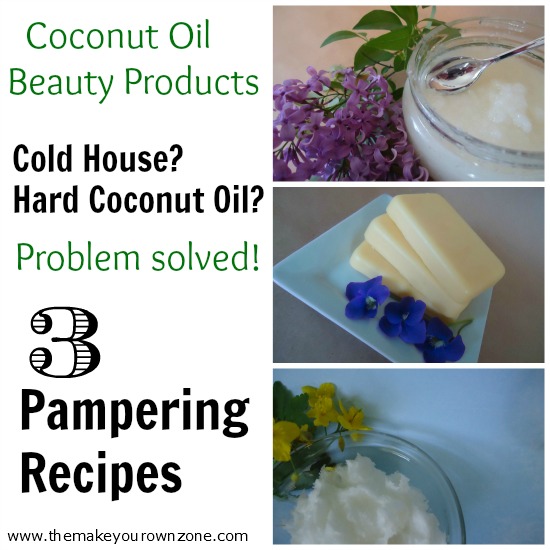 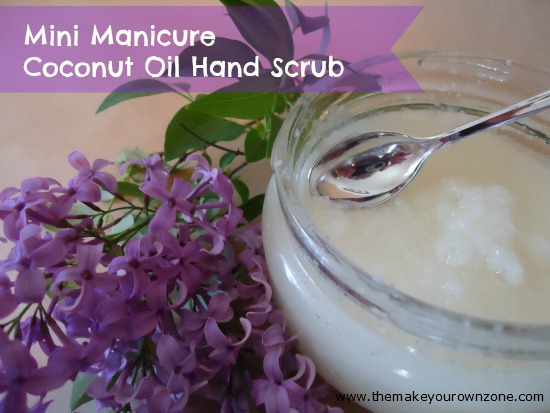 This first recipe uses the strategy of adding a little bit of another oil that stays liquid at any temperature.  You still get the great moisturizing benefit of coconut oil without it turning hard.

Melt the coconut oil in the microwave for about 30 seconds to liquify.  Then stir together the liquid coconut oil, the olive oil, and the coarse kosher salt. Stir in the essential oil if using.  Store in a jar with a lid.

This mixture is wonderful to keep by the  kitchen or bathroom sink for an invigorating hand scrub that leaves hands super soft and smelling great.   Just scoop a little bit onto your hands, rub it around well, and then rinse and dry.

This second strategy mixes melted coconut oil with melted wax and then you just let it harden!  This recipe took a little more work, but was my favorite.

I purchased a 1 Lb. block of natural beeswax at Hobby Lobby.  To make this recipe I cut off about a 1″ chunk and melted it.

The method I use for melting wax is to put the hard wax in an empty clean tin can, and then put the tin can in a pan with some water and slowly heat it on the stove until the wax is melted. (You can see a picture of this method on my post about homemade firestarters).

I had first put 1/2 cup of water in my tin can and marked how high it came with a sharpie marker as best as I could. (you can then toss out the water)  Then when I used the can for melting my wax, I at least had some type of mark for how much liquid wax I ended up with.  My 1″ chunk of wax was almost 1/2 cup when it was melted.

I then melted 1/2 cup of coconut oil in the microwave until it was liquid. 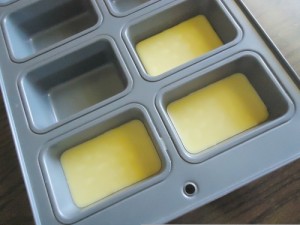 If this happens, put the tin can back in your pan of hot water and heat again until the beeswax/coconut oil mixture is liquid.

Then pour your melted liquid beeswax/coconut oil mixture into molds.  I had a pan for making mini loaves of bread that worked great.  I filled them about 1/4 full.

After about 30 minutes the mixture should be hardened into your lotion bars.  They should pop out of the molds quite easily.

To use your lotion bars, just rub your hands around them and the heat of your hands will melt them a bit to provide the moisturizing.  You can rub the lotion bars over other parts of your body as well.

The last strategy is to simply get out your mixing bowl and beaters and whip the coconut oil until it’s soft.  If you enjoy using straight coconut oil without anything else added, this might be the solution for you!  I did find, however, that over time, it does harden up a little bit again.

Place your hard or semi-soft coconut oil into a mixing bowl and use an electric mixer to whip air into the coconut oil, making it softer and creamier.  Store in a covered container.  To use, scoop a little bit onto your hands and then rub into your skin for moisturizing. 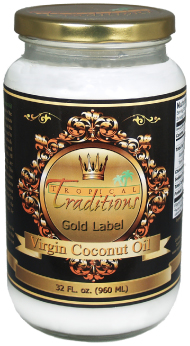 With these strategies, I’ve found my Tropical Traditions Coconut Oil to be a great way to pamper and soften my skin no matter what the temperature or the time of the year.  All of these DIY beauty products make great gifts too!

Disclaimer:  Tropical Traditions provided me with a free sample of this product to review and I was under no obligation to review it if I so chose, nor was I under any obligation to write a positive review or sponsor a product giveaway in return for the free product.