Have you proudly told someone you’re making your own homemade laundry “detergent”?  If you have, you may want to rethink your choice of words.   The majority of homemade recipes are for a laundry “soap”.

Ok, maybe I’m being a little technical here, but there is indeed a difference between the two terms.  If you’re grating up a bar of Ivory soap or Fels Naptha soap for your homemade mixture, you are really making a homemade laundry “soap”.    In the interest of accuracy, let’s take a closer look at the subject. 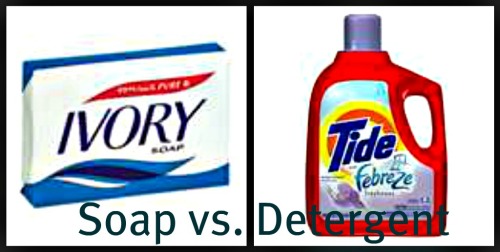 Soaps, for the most part, are made from materials found in nature, and detergents are made from synthetic (made made) ingredients.  In fact some detergents are made from petrochemicals which are a nonrenewable resource and a waste product of the petroleum industry derived from crude oil or natural gas.  This can be a big turnoff for some folks against detergents, and soap seems to be the friendlier choice for the environment,

Both soap and detergent are surfactants meaning they are “surface acting agents” necessary to reduce the surface tension of water.   Water will hold to itself (such as when water beads up).  For water to soak into a surface, such as your laundry, it needs a substance to cut the surface tension and this is where soap and detergents come into play.<

Soap has been used by many, many generations of people to clean clothing.    It wasn’t until Word War I when fats used to make soaps were in short supply that efforts began to make some other sort of synthetic cleaner.

As washing machines gained popularity too, the soap flakes that had been used in the past were found to not be as desirable anymore because they could dull colors or gray the whites (some of the same complaints we still have today with a homemade laundry soap).    When detergents came on the scene in the 1940’s they gained popularity very quickly because they functioned in a way that solved these problems.

Is one better for cleaning than the other?

Many people feel detergent is in fact better for cleaning the laundry for one main reason – it rinses away better in hard water.

You may also find that if you have hard water, you may experience some of the common complaints such as the graying or dulling of clothing because of soap’s lesser ability to rinse away completely.

Although detergents have the upper hand at rinsing away better, I have not found soap to be that bad either.  Perhaps my water is not that hard.  I think soap is easier on the environment, and it’s cheaper too.  When you grate up a bar of Ivory soap for a batch of the homemade liquid laundry soap, you get a lot of laundry soap for very little money.  There are also ways to get around the hard water issue such as adding some baking soda or vinegar to the laundry water.

A new recipe to try

I recently found a recipe that may in fact be a laundry “detergent” because it uses Dawn dishwashing liquid, which I think is a detergent, not a soap, (although a quick Google search on that subject was not very enlightening).  It also saves the step of grating the bar of soap which is the most boring and tedious part of making your own mixtures.  Although this recipe is just for one gallon, you could probably make several gallons at one time.  Dawn dish liquid is probably not as gentle on skin as Ivory soap, but it would probably do a good job of cutting greasy stains on clothing.