When it comes to disinfecting your home, the option of using bleach is the most common choice. Bleach, sometimes thought of as the “nuclear option” for disinfecting, will always get the job done.

But increasing numbers of homemakers are looking for more natural and environmentally friendly ways to disinfect.  Bleach is a strong substance to have around the house and is one of the most common exposures reported to poison control centers.  Many people also have concerns about the effects of bleach on the environment.

The subject of disinfecting was on my mind recently after a bout with the stomach flu.  And because I’m always thinking about homemade options, I once again started wondering about a natural disinfecting option that I’ve seen cited around the internet many many times. 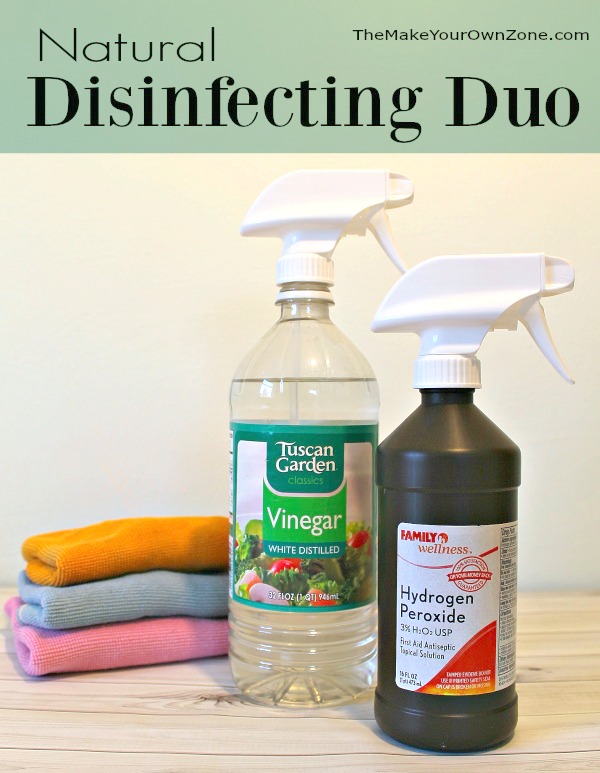 For some years now I’ve been coming across articles citing a study done at Virginia Tech in 1997.  It showed that misting a surface with 5% vinegar, followed by a misting of 3% hydrogen peroxide, could be 10 times more effective at killing germs than each product used alone.  This original study was done on beef carcass tissue and was shown to be effective in reducing Salmonella, Listeria, and E. Coli, some of the most nasty micro-organisms that create the need for disinfecting. 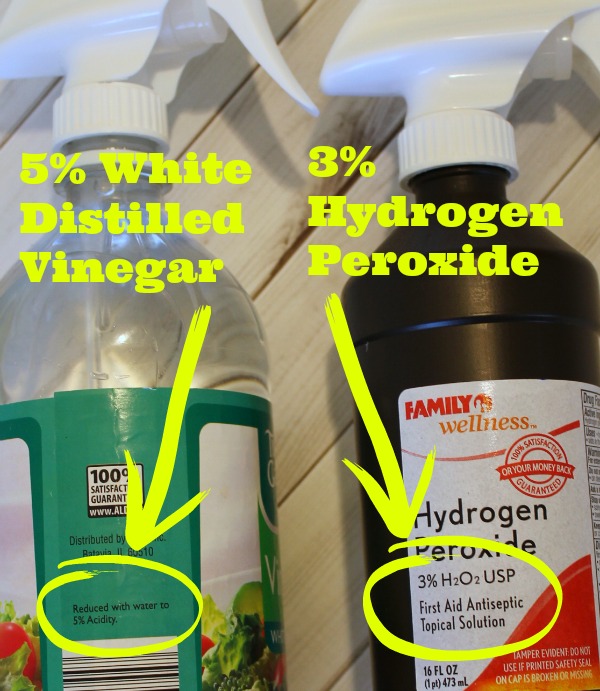 I finally came across this very helpful and thorough article on this subject and the author even took the time to contact Dr. Susan Sumner, one of the main participants in the original study.

After reading through that article, and thinking and pondering for awhile, I decided this natural option is indeed a legitimate way to disinfect if you are looking for an alternative to bleach.  It’s simple and easy to do as well.  It’s important to note that this method does NOT mix the two liquids together.  They must be kept separate in their own bottles because when mixed together they create an entirely new and unstable substance that can be an irritant to lungs (paracetic acid).

Step 1:  Before beginning to use the items above, clean the surface with soap and water.

Why?  Organic soil interferes with the germ killing abilities of vinegar and hydrogen peroxide.  Soap and water is thought to be the best at ridding surfaces of organic dirt and this will help maximize the impact of the vinegar and peroxide.

Step 2:  Screw a spray nozzle top onto your bottle of hydrogen peroxide.

Why?  Hydrogen peroxide breaks down in the light which is why it’s always sold in dark brown bottles.  To keep the peroxide effective, it needs to be kept in its original bottle. Just screw a spray nozzle onto the bottle and you’re all set!

Step 3:  Put some white distilled vinegar in a spray bottle, or perhaps a nozzle will just fit on your bottle of vinegar too like mine did!

Why?  As mentioned above, the two liquids must be kept separate so you don’t form the new substance of paracetic acid.  Be sure to keep the vinegar in its own sprayer and the peroxide in its own bottle.

Step 4:   Spray your surface with one of the liquids.  The order doesn’t matter. You can start with either the vinegar or the peroxide.  After spraying, let it sit for 5 minutes, then wipe with a clean cloth.

Why?  Giving the substance a little more time to work (known as “dwell time”) can help in reducing more germs.

Step 5:  Repeat with the other bottle by spraying the surface, letting it sit for 5 minutes, and then wiping with a clean cloth. 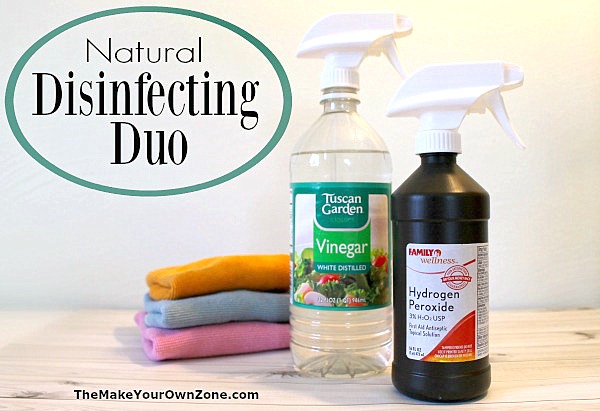 Once again, the most important thing to remember is to keep them both in their own bottles and don’t mix them.