I’m in one of those patches again here on the blog where I feel like I haven’t had too many new  good discoveries to share.  And isn’t because I’m not trying.

I’ve always been committed to testing every recipe before I write about it.  I want to make sure I have first hand experience with the results before I pass it along to all of you, because – well because that’s just the responsible thing to do.

Sometimes I decide to write about my misadventures and experiments that don’t turn out so well (like last year’s unfortunate chocolate covered cherries pictured below), and I call them my “Half Baked Ideas“.

But often times I don’t write about them.  I just chalk it up to experience and keep working and tweaking the recipe behind the scenes until I’m happy – OR – sometimes I just toss out the recipe, label it a dud, and move on to the next idea. 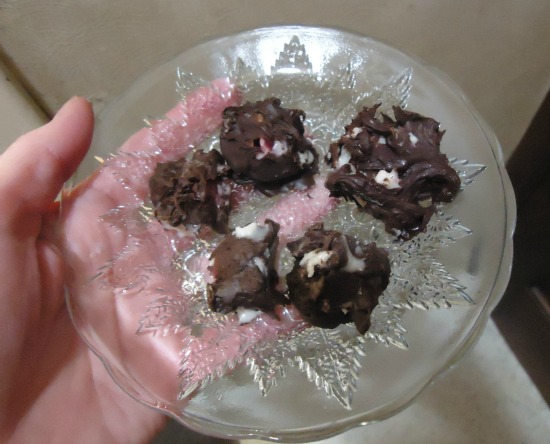 It seems like the last few weeks have had more than their share of trial recipes that have been disappointments.  It’s been going something like this:

~~ I tried an oil face cleansing method hoping it would be something I liked for moisturizing my face.  It didn’t seem to do much for my skin and it made my washcloths and towels smell weird.  After a few weeks I decided to throw in the towel (pun intended).

~~ I tried a homemade cake mix but when I used it in one of my favorite dessert recipes it turned out kind of dry.  Back to the drawing board for that one.

~~ I tried a Make Your Own Condensed Cream of Chicken Soup recipe and it had a REALLY strange texture.  In fact Hungry Son remarked, “Good job on making that batch of Oobleck, Mom!”.  Hmmph, smarty pants kid.  But he was kind of right.  All the cornstarch and water in that recipe were not resulting in good things.

If you’re not Bill Nye the Science Guy you can learn more about Oobleck here: Oobleck Science Project

Or you can watch this fun little video to see what Oobleck looks like.

{Hint:  it looks kind of like homemade cream of chicken soup }

Instead of getting discouraged by these recent failures, I decided to do a little looking back at what HAS been working.  I did a review of all my past blog posts and found several things that have indeed been great discoveries that have been useful in day-to-day life.

I looked specifically at things I tried just for the sake of the blog, and decided not to consider in my review, the recipes or things that I had already been doing or making for several years already.  I simply wanted to see if all this experimenting for the blog was yielding anything worthwhile.

I was happy to see that there were indeed several things that have been “keepers”.   There were things that we now use a lot in our home, with some things being used on an almost daily basis.

Some things I’ve written about several times already.  I’ve made it known that I like my homemade laundry soap and my all purpose cleaner.  So instead I dug a little deeper and found some things that I’ve not drawn too much attention to, but that have been experiments with happy endings and that have been pretty easy to keep making again and again and to incorporate into our lifestyle.

Here’s a roundup of 10 of those projects (and when I first wrote about them).  This doesn’t mean these are the only 10 projects that have been successful, but they were good examples of when things have gone right. 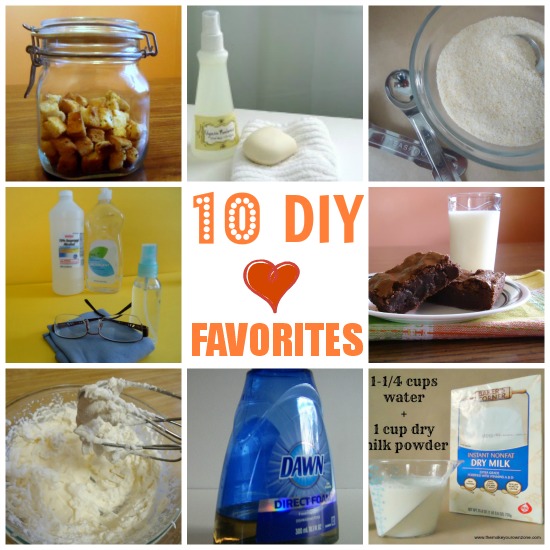 We’ve become pretty dependent on this homemade skin moisturizing spray.  It’s first on the list because in the midst of this harsh winter it’s been getting lots of use at our house.  Hubby’s skin gets super dry in the winter from being out in the elements and his skin doesn’t respond well to the creamy type of lotions.  In fact they almost make his skin worse!  However this glycerin skin spray has worked VERY well for him and I like it a whole lot too.  We’ve always kept a bottle or two of this on hand since I made up the very first batch.

I’ve been using this little strategy ever since I first gave it a try too.  I use it for our dish soap in the kitchen, and our hand soap in the bathroom.   It’s a penny pinching favorite.

This one kind of surprised me, but I’ve found myself making these homemade croutons time and time again because it’s a great way to use up leftover bread.

I keep this little bottle of homemade cleaner in my bathroom at all times now.  It’s wonderful.

I haven’t bought a bottle of garlic salt in the store since I found this combination of simply combining garlic powder and salt.  It’s such a simple method that it’s easy to mix some up again whenever your previous batch runs out.

The pleasant surprise for me on this one is that homemade whipped cream will stay OK in the refrigerator for a few days.   Now if I’m bringing a pie or dessert to a gathering, I try to always make this homemade whipped cream to go with it because I know I can make it the night before if needed and it will still be OK the next day.  Plus, I just think it tastes better than Cool Whip does with way less unneeded preservatives in it.

I almost always have the ingredients for these homemade brownies in the house.  I pretty much stopped buying brownie mixes once I started making this recipe.  It’s got to be a really great sale now if I’m going to buy a brownie mix.

This is one of the newer recipes on this list, but I’ve been using it all the time since I first mixed it together.  It works great and I don’t plan on buying the store bought daily shower cleaners anymore.

This is another fairly new discovery for me, but it’s already come in handy several times just in the last few months so I know it’s going to be a keeper!

So those are a few of my favorites, and rest assured if it’s a little quiet over here it’s because I’m busy behind the scenes, fiddling away and making sure a recipe is “blog worthy” before writing about it.

I’ve spent the last week in pursuit of some good strategies for homemade chai tea, again with some good results and some duds.  But I think I’ve found a couple fun things to share including how to make your own tea bags.  (Yes, you read that right.  I’ve been making my own tea bags!)   Stay tuned for those upcoming ideas!