It’s no secret that I like making things. I’m a collector of recipes and ideas and I’ve always found it enjoyable and satisfying to experiment and try new things. Knowing how to make things has always given me a comforting feeling of “preparedness”, that I could hopefully always make what I need when the moment arises.

That being said, that are some things I don’t bother to make. Because even though I love the satisfaction of homemade things, I very much value efficiency too and I love it when things are simple, quick, and straight forward without too much fiddling about. If a project feels wasteful whether it be in the area of my time, my supplies, or my money, I’ll most likely give it a pass.

As time has gone on, I’ve found that some homemade projects are a good fit for me and others – not so much. Some time ago I read the book “Make the Bread, Buy the Butter” which was a good look at this topic too. Just because you CAN make something, doesn’t always mean you SHOULD make something. It has to be a good fit with your taste, your lifestyle, the amount of time you have, your budget, and the needs of your own personal household.

For instance as much as I enjoyed that book, I have a different opinion just on the title – I would buy the bread and make the butter! 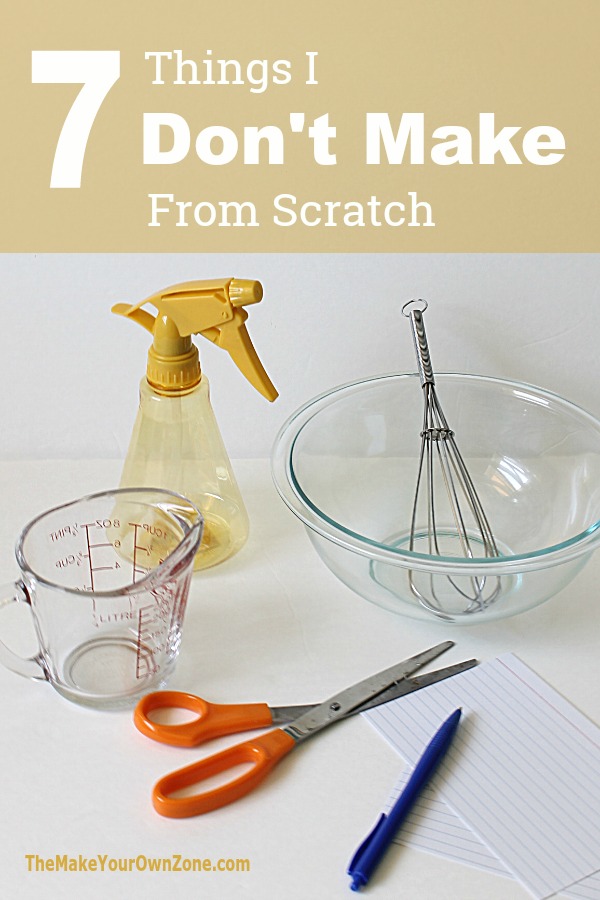 7 Things I Don’t Make From Scratch

So here’s a look at seven things that currently, I don’t make. These are items where I haven’t found enough reward at the end of the project to go to the work of making it. Of course things might change over time but right now, none of these seem worth my time and effort or money for the final result that’s yielded.

Making the dough and then cutting it all into little strips or shapes has never looked fun to me. The job is made a little easier I suppose with a pasta maker, but that means keeping another piece of equipment around the house. And because pasta is not something that’s filled with all kinds of flavor on its own, I don’t really know what would make a homemade version that much more superior. For now I’m very content to just pick up a box of pasta at the store as needed.

I do like to make:  Homemade Red Sauce For Pasta

Although I’ve tried various homemade personal care items, I’ve not had much interest in homemade shampoo. My main motivation in this area would probably be saving money, and instead I use the strategy of just using less shampoo. I’m more comfortable with this approach rather than using something that might make my already somewhat frustrating wavy hair even harder to manage.

I do like to make:  Brown Sugar Body Scrub

Yes, I’ve experimented a little bit with homemade crackers (DIY Wheat Thins and DIY Cheez-Its).  But homemade crackers are kind of a fiddly process and I haven’t found the taste to be that much better.  They’re rather interesting to try a few times, but they’re not something that fits into my lifestyle on a regular basis.

This one makes me kind of sad because back in the day I used to sew some of my own clothing. But it got to the point that by the time I had bought the fabric and the pattern, and any other notions that were needed, it just all seemed rather expensive. And my final results were OK, but I usually got a better fit from the clothing bought in the store. I still like that I have some sewing experience because it helps me mend and make alterations on items, but it’s been a long time since I’ve done anything more than that. For now, I’d rather hunt in the second-hand stores or the consignment shops if I want to get bargains on clothing, rather than sewing my own clothes. If I’m feeling crafty, I’ll make accessories instead.

I do like to make: Knit Bow Tie Scarf

Some condiments and sauces are fun to make, but the tried and true favorites of ketchup and mustard are hard to duplicate.  I’ve experimented with both of these with lackluster results. For now, we’re sticking with the familiar tastes of good old store bought ketchup and mustard.

I love, love, love to make homemade cleaners. But the few times I tried the homemade remedies for slow-moving clogged drains, I got zero results. Whenever I’ve been in a clogged drain situation, I’ve always had to use the more heavy duty store bought remedies. This is one homemade item that has just not worked for me.

I do like to make:  All Purpose Peppermint Soap Spray Cleaner

I remember going to a family gathering where my sister-in-law had made homemade hamburger buns, and yes, they were good! But on a regular basis, homemade buns are not something I’m willing to give my time and efforts too. There are some nice whole wheat versions in the store that we like, and that’s good enough for us right now. Instead, I’ve been focusing my efforts on meatless things I can put in the buns, rather than making the buns themselves.

I do like to make:  Homemade Black Bean Burger Patties

So not every homemade recipe is a good fit for everyone. My list may be different than yours.  And as you can see for each item that I don’t like to make, there’s usually some other item in that category that I DO like to make. Trying new recipes and ideas is good thing, but it’s also a good thing to keep giving your efforts an honest evaluation and directing your energy, time, and dollars towards the areas where you’ll reap the most benefit. 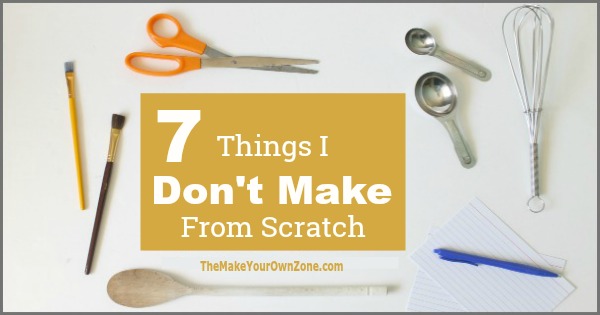